Skip navigation
We use cookies to improve your experience using this site. More information
Become a patron
Jun 10, 2019 at 10:58 AM
Bjorn Lomborg, The Gullible Environmentalist

Writing in the New York Post last week, Bjorn Lomberg argued against calling climate change "catastrophic", and quoted a United Nations report which alleged that global warming will have only a trivial effect on global GDP over the next half century. As he put it, the total impact of global warming by 2070 will be no worse than a single recession, when the world has survived three global recessions since the late 1970s:

According to the UN climate science panel's last major report, if we do absolutely nothing, the impact of rising temperatures will be the equivalent to a reduction in incomes of between 0.2 and 2% in the 2070s. That is equivalent to the impact of a single economic recession over the next half-century. To put this in context, humanity has managed to get through three global recessions in the last 40 years.

The panel notes that for most sectors, "the impact of climate change will be small relative to the impacts of other drivers," such as changes in population, age, income, technology, relative prices, lifestyle, regulation and governance.

Just pause and reflect on that. The UN's own climate change panel tells us that looming demographic changes (like more people getting older) and other challenges are going to have a much bigger impact on us than climate change. ("Calling climate change 'catastrophic' makes it harder to find real answers", New York Post, May 29 2019) 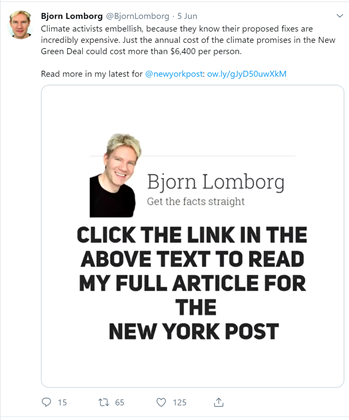 Lomborg is quite right: the UN's climate change body the IPCC ("Intergovernmental Panel on Climate Change"), does indeed say that "estimates of global annual economic losses for additional temperature increases of ~2°C are between 0.2 and 2.0% of income" (Arent, Tol et al. 2014, p. 663).

But is "The Skeptical Environmentalist" being sceptical enough? Why trust a UN body? Why not look at where the data—shown in Figure 2—actually comes from?

Figure 2: The UN IPCC's plot of estimates of GDP damage from temperature rise 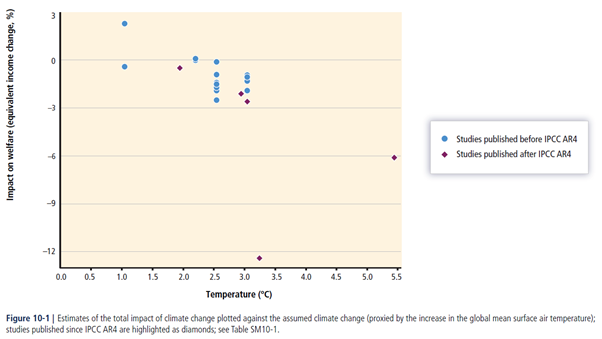 The definitive overview of these studies (there were 20 studies as of 2014, when the report was published) is provided by the leading co-author of the chapter Lomborg cites, Richard Tol (Tol 2009; Tol 2018). All of them are studies by economists, and as is well-known, economists are fond of making what they call "simplifying assumptions".

Of all the assumptions behind these studies, my favourite—if that is the right word—is what Tol describes as "the statistical approach", which "assumes that the observed variation of economic activity with climate over space holds over time as well" (Tol 2009, p. 32).

In Tol's words, what this means is that these economists performed "some sort of regressions of variations of an economic quantity over space on climate variations over space" (Tol 2018, p. 1), and found a weak, nonlinear relationship between GDP today and temperature today. They then used these results as a proxy for the impact of the increase in temperature from global warming on GDP.

Though Tol, like Lomborg, champions the results of these studies, he does note a key problem with this approach:

"The main disadvantage is that climate variations over space are used to derive the impact of climate change over time. Space and time are different things, though…" (Tol 2018, p. 2)

Well indeed they are—and they should have been treated as different things. To delve more deeply into what it means to assume that what applies to one also applies to the other, it helps to break the factors that determine the temperature at a specific location today (say, Copenhagen) into the components determined by time and those determined by space—something these economists did not do. This requires treating temperature on Earth's biosphere as being determined by at least three different factors:

Scientists calculate the first as minus 18°C, and it can be treated as constant. The second is 33°C today: this is the difference between the minus 18°C average without the greenhouse effect, and the actual average temperature of the Earth's biosphere today (which is estimated to be 15°C). This is the component that will increase with global warming. The third can be positive or negative, depending on the location: for Copenhagen for example, it is about minus 7°C.

Therefore, the correct way to describe the variable relationship between GDP and temperature is to break temperature into two components: one caused by the average temperature of the planet—which will change over time due to global warming—the other caused by deviations from this average due to location on the planet.

Nonetheless, that's what they used this data to do. Nordhaus, for example, asserted that global GDP would fall by 1% if global temperature rose by 3°C (Nordhaus 2006, p. 3517, Table 2)—and this became one of the data points in the IPCC graph of temperature versus damage to GDP (see Figure 2). But all he was entitled to assert was that if one location (say, Chicago) has a 3°C higher average temperature than another (say, Copenhagen), then it is likely to have a 1% lower GDP.

The absurdity of using relationships between temperature and GDP by location to predict what will happen to GDP from global warming is more obvious in an earlier IPCC report, written by a related group of economists to those who wrote the 2014 report. Chapter 6 of the IPCC report Climate Change 1995: Economic and Social Dimensions of Climate Change, entitled "The Social Costs of Climate Change: Greenhouse Damage and the Benefits of Control", states that:

It could be quite valid to say that statistically, a location whose average temperature today is 10°C higher than some other location is likely to have a GDP that is 6% lower. But to say that a 10°C rise in global temperature will only reduce global GDP by 6%? That is madness. A 10°C rise would ultimately melt all of Earth's glaciers, inundate the world's coastal cities, and drastically alter the climate of the planet. The last time the planet was that much warmer was over 50 million years before humans evolved: the planet would be unrecognizable. You simply can't extrapolate from conditions in our current world to one that is 10°C hotter. A model that estimates a mere 6% fall in GDP as a result of that increase in temperature is an absurd model.

The next few figures give a visual illustration of the problem with the "space equals time" assumption made by these economists. They have derived a weak, nonlinear relationship between GDP today and temperature today, and then assumed that exactly the same relationship applies over time as well as the global temperature rises. The damage to GDP therefore looks like a smooth hill with the same slope in all directions: it doesn't matter how you change temperature—by movement from a cold to a hot place today, or by increasing global temperatures by the same amount over time. The same fall in GDP will result, as illustrated by Figure 3. It is therefore quite safe to increase global temperatures by 10°C. 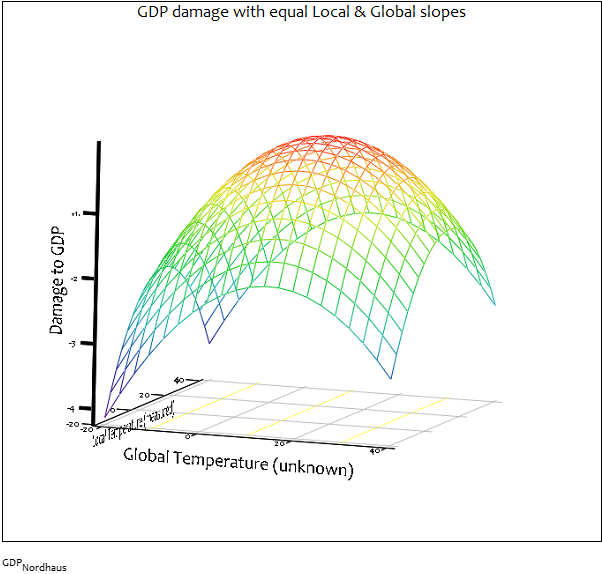 Figure 4: GDP damage if the Global slope is ten times the Local slope 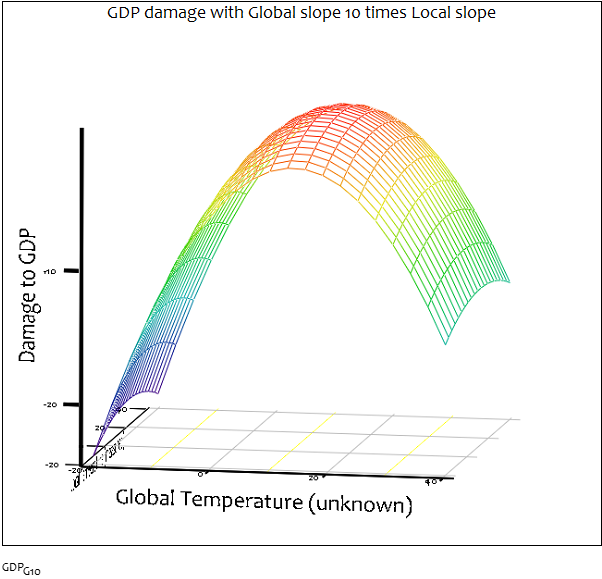 So should you have faith in the IPCC's prediction that climate change will reduce GDP by less than 2% over the next fifty years? Only if you can trust the "simplifying assumptions" made by the economists who wrote that part of the IPCC report.

The actual climate scientists who write other parts of the IPCC report certainly don't trust the economists. They can't say so in the IPCC report itself, because of the consensus rules that determine what the IPCC can and can't publish. But they are certainly saying so in their own academic papers. A recent paper by 16 climate scientists advised strongly against the methods that economists use to decide whether we should take action against climate change:

Current rates of change of important features of the Earth System already match or exceed those of abrupt geophysical events in the past (SI Appendix). With these trends likely to continue for the next several decades at least, the contemporary way of guiding development founded on theories, tools, and beliefs of gradual or incremental change, with a focus on economy efficiency, will likely not be adequate to cope with this trajectory. (Steffen, Rockström et al. 2018, p. 8257. Emphasis added)

Rather than being blasé about the impact of a 10°C increase in global temperatures, these scientists are worried that even a 2°C increase will trigger feedback effects in the climate that we will be powerless to reverse:

Our analysis suggests that the Earth System may be approaching a planetary threshold that could lock in a continuing rapid pathway toward much hotter conditions—Hothouse Earth. This pathway would be propelled by strong, intrinsic, biogeophysical feedbacks difficult to influence by human actions, a pathway that could not be reversed, steered, or substantially slowed. Where such a threshold might be is uncertain, but it could be only decades ahead at a temperature rise of ~2.0 °C above preindustrial, and thus, it could be within the range of the Paris Accord temperature targets. (Steffen, Rockström et al. 2018, p. 8257. Emphasis added)

They therefore argue that we should do everything possible to avoid a 2°C increase in global temperatures:

Precisely where a potential planetary threshold might be is uncertain. We suggest 2 °C because of the risk that a 2 °C warming could activate important tipping elements, raising the temperature further to activate other tipping elements in a domino-like cascade that could take the Earth System to even higher temperatures (Tipping Cascades). (Steffen, Rockström et al. 2018, p. 8254)

With global temperature already 1°C above pre-industrial levels, we're already half-way to the threshold that climate scientists warn could lead to catastrophic change to the biosphere, and therefore dramatic damage to the economy as well. So don't trust what a tiny cabal of mainstream economists tell you about climate change. Don't be gullible like Bjorn Lomborg. We only have decades left to avoid a catastrophe that, as usual, economists cannot see coming.