Skip navigation
Become a patron
Mar 16 at 6:50pm
CoronaBonds to hold the payments system together

The coronavirus could cause the financial system to collapse unless something is done to enable basic payments to continue during the fight against it. While some businesses are doing very well out of it—toilet paper and hand sanitizer produces come to mind—many, if not most, could collapse as their sales collapse and/or their workers become unable to turn up to work. Workers—especially those in the jovially-named "gig economy"—will be unable to pay their rents and mortgages. If we insist on these payments being honoured, mass bankruptcy could result that could take viable companies down with it—even toilet roll producers.

So what to do?

The answer is fundamentally simple: the Treasury issues "Coronabonds" that raise a substantial sum—enough to cover say 3 months of standard mortgage, rent and food payments for an average family. These Coronabonds could be priced at zero percent yield: interest rates are at that level anyway, and given the current stockmarket carnage, financial corporations would jump at the opportunity to park their money in an asset that won't fall in value.

Using the US Economy as our template, let's say that $1 trillion of these bonds were issued. They would then be bought by the financial sector—raising $1 trillion to be spend by the government on tenants, mortgagees and firms. The cost to the Treasury would be zero because that would be the yield of the bonds. The public debt would rise, but it would be debt carrying no servicing costs.

The inevitable question from our budget-assessed world is "how would we pay for it?", and the basic mechanics are outlined in the Minsky model shown in the screenshot below. I haven't filled in sample flows for the model, but the Godley Tables show that the entire scheme works in an accounting sense. The government could raise $1 trillion, spend it into the economy, and enable tenants to pay their rents, mortgagees to service their mortgages, and corporations to avoid bankruptcy.

We need something like this, now, before the Coronavirus overwhelms our monetary system in the same way that it has overwhelmed the emergency medical systems of many countries already. 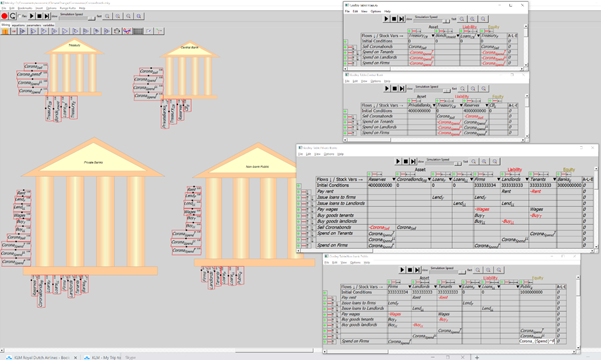 To check out the tables here, go to SourceForge and download Minsky.