We in the West are in still the CALM before the Coronavirus STORM stage, both in terms of infections and in terms of economic impact as we witness China's economy effectively grind to a halt, a harbinger of what to expect to come that the financial markets are STILL NOT discounting! For China's Coronavirus statistics grossly under report the number of infections by several multiples that this analysis will attempt to determine the true magnitude of China's outbreak which even the Chinese CDC now admits that their statistics are under reporting by significant degree the actual number of infected. Which has not just been my consistent view since the Coronavirus story first broke a month ago, but many scientists around the world have questioned China's data as measured across several metrics such as the unrealistic day to day change in infection numbers that for want of a better word were unnatural.

Basically China cannot test all suspected cases for the virus, instead only those who make into hospital tend to get tested, and thus excluding all those who either don't turn up to hospital i.e. told to self quarantine at home or are turned away from hospitals because there is no capacity to deal with more people clogging up the corridors, that and the tendency to brush bad news under the carpet then be reasonable for passing it up the command chain..

Furthermore the chinese CDC has stated that the Coronavirus IS airborne spread by aerosol rather than just being spread by droplets. The difference being that droplet spread is within close contact of a 2 meters, which is what we are still being told in the West, i.e. we will be fine if we stay over a metre away from infected people, whilst aerosol spread means transmission is by smaller particles of virus over vast distances, which is apparent given what we have witnessed take place on the Diamond Princess cruise ship over the past 2 weeks, where just 1 infected passenger catching the virus in Hong Kong has gone to infect over 700 fellow passengers as the virus likely spread through the ships ventilation system, and the fact that the Chinese have been spraying disinfectant into the air in Wuhan in attempts to kill airborne virus particles.

So to what probable degree are China's coronavirus infection numbers being under reported. My consistent view has been that the actual number is likely at least twice the official Chinese data, and possibly as high as ten times. However, reading the mainstream press where estimates vary from X4 to X20 the reported number. Which means that the current chinese tally of approximately 75,500 infected could range from 300,000 to as high as 1.5 million. So where on this wide spectrum is that which is most probable, which is important to know to determine how widely the Coronavirus will spread across the world over the coming weeks and months and what to expect in terms of a case fatality which is the focus of this video analysis.

My forecast for the number of infections and deaths by 20th of Feb 2020 vs reported and probable :

So my forecast remains for the the virus to infect over 1 million people by the end of February, just that the case fatality rate is far lower than the reported 2.3% i.e. around 0.64%, so less people will die, but the virus is still about 15 times more deadly than the seasonal flu, so definitely not to get complacent about.

Similarly my forecast for the UK remains in tact to target a trend towards 5,000 infections by the end of March 2020. Which will likely result in over 1000 hospitalisations and some 90 deaths. 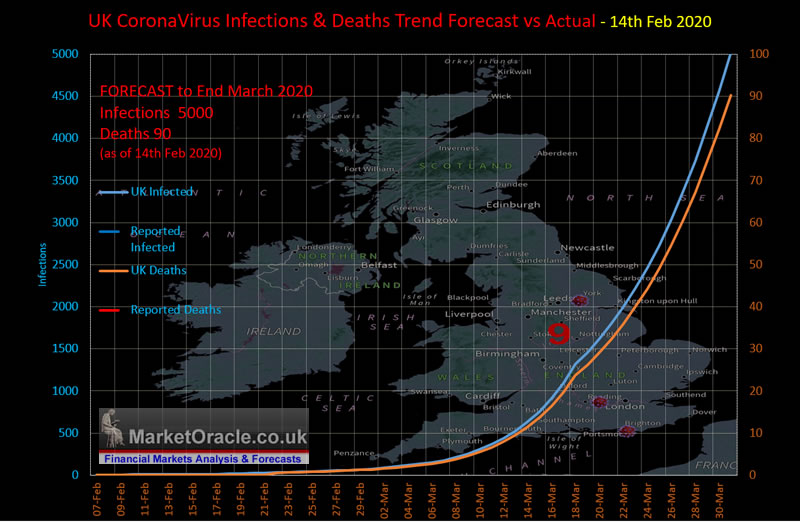 The bottom line is that China through it's extreme efforts to control the spread has succeeded in buying the world time, maybe 2 to 3 weeks, which has slowed the progression of the virus across the world, however the failure of the virus to spread appears to have lulled many into a false sense of security especially if one focuses just on the Chinas official statistics, Therefore I still expect widespread outbreaks across the world, the most recent being reported that Iran had 5 infected and 2 deaths that we know of, as Iran is also a totalitarian state so we do not know the true magnitude of Iran's outbreak that like China could be 7 or more times higher.

If the virus spread is inline with seasonal flu i.e. to infect around 15% of the worlds population then at a case fatality rate of 0.64% could result in as many as 7.5 million deaths. So we are still definitely in the calm before the Coronavirus storm stage.

My stock market trend analysis of 9th February forecast that if the pandemic transpires as expected then the stock market would weaken into early March, targeting a trend to 27,500 to be followed by a bounce higher into the end of March.

The raging bull of 2 weeks that was surely eyeing hitting Dow 30k imminently is fast becoming a distant dream as the reality of what the Coronavirus nightmare could hold in store for the world is slowly starting dawn on the markets. Still with the Dow at 28,892, the stock market is only showing a mere flicker of concern to that which is taking place in Asia, not yet able to put 2 and 2 together to see what it means for us over here, for when the virus outbreaks arrive, and it is a question of when rather than if!

Remember folks the trend we are witnessing is OUTSIDE THE SCOPE OF TECHNICAL ANALYSIS! Which is why my focus is on the unfolding pandemic rather than to look for clues where non exist i.e. the price charts. For in technical terms the Dow is in a bull market coming out of a correction during January and THUS the bull trend should resume towards 30k and beyond! That is the technical picture!

Instead the unfolding REALITY of the Coronavirus trend continues to ring ALARM BELLS that won't become apparent on the stock charts until we start to see technical breakdowns i.e. a series of lower highs and lows, which is what is implied by my Coronavirus forecasts both for China, the UK and the whole world.

However to counter reality we have the central bank money printing fanatics who will be hell bent on riding out the Coronavirus storm as exhibited by China's SSEC index. How many hundreds of billions of dollars have chinese banks thrown at the stock market? At least $300 billion and likely as much as $500 billion! Expect similar money printing responses from the across the western word, so all those of only a few weeks ago who were expecting the Fed to tighten it's balance sheet will once more be proven to be wrong!

So who will have the upper hand, well the trend will be down into early March as I forecast on the 9th of Feb, beyond which I won't know who has the upper hand until I have -

a. More data in terms of actual spread of the virus to outside of China.

b. The quality of the March stock market bounce.

At this point in time it looks increasingly probable that the stock market will have another leg lower after a weak March bounce, so we may actually get a Coronavirus bear market of sorts. Especially as RNA viruses tend to mutate rapidly so the more humans infected the more strains of the virus to expect where weaker strains tend to die out because they are less infectious whilst stronger strains prove more virulent resulting in a higher death toll, so we may see far more deadly strains of the virus emerge that would be far more costly in terms of lives and economic activity.

In terms of CHINA and it's draconian measures to combat the virus, don't expect that to help us in the west much for all China has done is buy the world some precious time to prepare which from what I can see government agencies are NOT UTILISING! For instance I still hear the imbeciles at the World Health Organisation stating that it is OKAY for people to fly out of CHINA! ARE THEY INSANE! It's as though the WHO want an pandemic so that it elevates their status as an organisation and funding!

With such insanity the spread of the virus is virtually assured that will soon overwhelm even the best equipped health systems. Where all we have in the UK is an always teetering on the brink of collapse NHS that can barely cope with the regular flu let alone something 15 times as virulent!

So perhaps we have no more than a couple of weeks before we start witnessing significant outbreaks in our nations that cannot be traced back to China. And my original expectation for a vaccine coming to the rescue in about 4 months time was overly optimistic as it now appears the earliest a vaccine will be available is early next year! So the Coronavirus could rage across the world for the whole of 2020!

The bottom line is that this WILL have dire economic consequences, whilst it is too early to expect a global recession, however that is the direction we are trending towards. Which WILL hit the stock markets harder than anything visible on the price charts today! What are the consequence of 230 million seriously ill people across the world resulting in 7.5 million deaths? It's increasingly looks like were going to get a Coronavirus bear market the magnitude of which will only become apparent in hindsight.

Of course my Coronavirus analysis could be prove to be wrong and the virus to largely be contained a month from now with stocks back to a raging bull market injected with QE adrenaline and being driven exponentially higher by the AI mega-trend. But I don't think so, especially when I look at the latest news out of South Korea where their tally of 190 infected literally doubling over night to 356! Virtually ALL as a consequence of just ONE infected person spread viral particles!

So Dear patrons, protect yourselves and your family from the coming Coronavirus storm, some strategies of which I cover in my video from the 21minute mark, strategies for prevention and in readying ones immune system so as survive getting infected with as mild an illness as possible.

Furthermore, my investigations into the actions of the virus suggests it's severity is age dependant, i.e. the younger and more fit and healthy a person is then the more likely they are to have a mild illness, conversely if one is elderly and has chronic diseases, or has an impaired immune system then they are at a greater risk of serous illness resulting in a higher mortality rate than the general population.

So as is the case with investing in the stock market, it all boils down to risk management, which where the virus is concerned we can in the first instance reduce ones risks of contracting the virus and then to reduce the risk further by boosting ones immune system to better recover from becoming infected.

So please take this calm before the storm stage to become more healthy and strengthen your immune systems.