Skip navigation
We use cookies to improve your experience using this site. More information
Become a patron
Mar 11, 2019 at 10:23 PM
The crisis in Venezuela: Regime Change is never a good idea 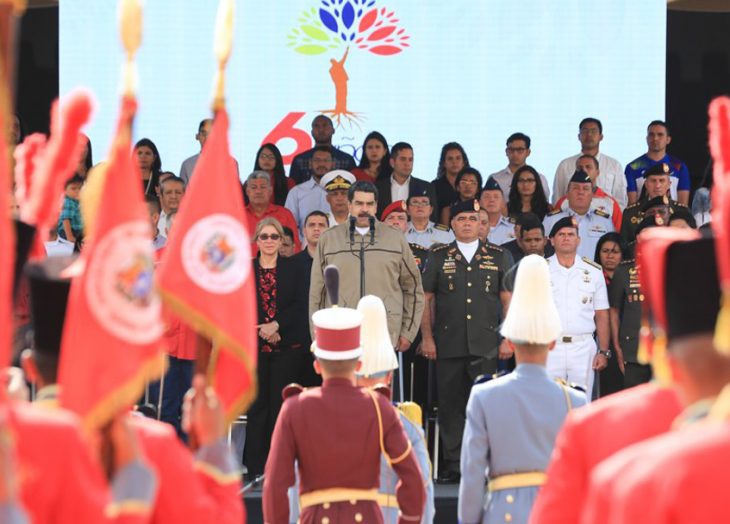 The United States is once again agitating for regime change, this time in Venezuela. There is an economic crisis in Venezuela, and the government of Nicolas Maduro is under immense pressure. However, a US-backed coup led by neo-Fascist elements will not benefit the Venezuelan people. Our response must be to oppose regime change and support and self-determination.

There is a simple definition of regime change and it stands the test of time: “toppling an existing regime that displeases or worries the United States Government”.

The recent history of regime change in the Middle East reminds us that such military adventures lead to chaos, collapse and a tide of refugees. Three million Venezuelans have already left the country and American economic sanctions are making the situation worse.

Venezuela has been subject to US sanctions since August 2017 which means it cannot sell oil on the global market. The consequences of this are devastating for ordinary Venezuelans and the oil embargo has deepened an economic crisis across the nation. The economic pressure on Venezuela has been increased this year with the freezing of the nation’s bank accounts and seizure of Venezuelan assets held offshore.

The concept of “regime change” has a long history and the United States has successfully overthrown at least 15 governments in the last 200 years: Hawaii, Cuba, Puerto Rico, the Philippines, Nicaragua, Honduras, South Vietnam, Iran, Guatemala, Chile, Grenada, Panama, Iraq and Afghanistan. Failed (or stalled?) attempts were made on the Korean peninsula in the 1950s, then in Cambodia and Laos during the 1970s. It is the policy of at least some Washington neo-cons, including Secretary of State Mike Pompeo, that Iran is the next cab of the rank (again).

For younger generations who have grown up post-Vietnam, their first taste of the American appetite for regime change would have been in 1991 when the senior George Bush pushed to overthrow Saddam Hussein in Iraq. The mission did not achieve its strategic objective until 2003 when the younger George W Bush avenged the humiliation of his father and “secured” Middle East oil supplies. The second attack initiated an ongoing military occupation of Iraq by a coalition of foreign forces, including Australia. Let’s also not forget Libya where “regime change” in 2011 was built on the lie that it was to protect civilians.

Such an excuse is always a lie; the only tangible result of these “regime change” operations has been to create a global refugee crisis; the destruction of once proud and independent nations and the perpetuation of an unhelpful “Us and Them” narrative under the misleading rubric of “Fighting Terrorism”.

Western intervention is never a calming presence; if anything, it adds fuel to an already volatile situation. Any pretext, it seems, justifies American military action against regimes that do not bend to its will. The US also takes action that falls just short of war, such as the imposition of economic sanctions. Now there is increasing talk of pushing regime change – again – in Latin America.

Central and Latin American nations are particular targets for US intervention, perhaps because of their physical proximity, but also because of their economic importance. There is a strong link between military and corporate interests in many regime change operations. In fact, Trump’s National Security Advisor, John Bolton, has admitted that the destabilisation of the Maduro government is about Venezuela’s oil reserves, not human rights. With all the noise and propaganda surrounding the situation in Venezuela it can be difficult for progressive people to know how to respond.

We must assess the situation in Venezuela in relation to three important principles: non-intervention, self-determination, and solidarity with the oppressed. Non-intervention means opposing the US-led attempt to overthrow the Maduro government. Self-determination simply means that the Venezuelans should be free to decide their own fate, and solidarity with the oppressed builds on that to recognise that the poorest and most marginalised will suffer the full force of a coup backed by rich and powerful Western interests.

We need to remember that Maduro’s predecessor, Hugo Chavez was immensely popular with the poor and middle classes of Venezuela. Chavez won eight elections and the reforms of his government such as literacy programs, jobs, housing and health care. The collapse of the Venezuelan experiment is only partly the fault of Chavez successors. An honest accounting admits the mistakes and the very real corruption of the Venezuelan leadership, but it most also recognise the constant undermining of the revolution by the super-wealthy elite that has strong political and economic ties to the US regime and the anti-Communist Cuban exile community in Florida.

Nicolas Maduro is not Saddam Hussein or the Venezuelan equivalent of Muammar Gadhafi. He won an election in May 2018 with over 67 per cent of the vote, and a right-wing call to boycott the elections failed. International observers reported it was a clean and fair election, but this has been ignored by the international media in favour of a convenient myth that the government rigged the election and forced people to vote.

The Venezuelan opposition leader who has the support of the US to topple Maduro in a coup Juan Guaido, is a documented fascist with ties to right-wing death squads and deep links to the American security and intelligence community.

There is a global movement of solidarity with Venezuela the principled aim of opposing any foreign intervention, including invasion, arming the right-wing militias or funding a coup attempt. There was even a mobilisation in the West African nation of Mali at the end of January. The American left is mobilising to oppose military intervention and calling for sanctions to be lifted.

Closer to home, if you want to do something get in touch with the Venezuela-Australia Solidarity Network, an umbrella group for organisations and individuals who oppose the US sabre-rattling. The VASN organises solidarity rallies calling on the Australian government to oppose and proposed military action and to support lifting the sanctions that are strangling the Venezuelan economy. Of course, the Morrison government is committed to the US Alliance, even with Trump in the White House, but it is important for Australians to hold our government accountable for its allegiance to the American agenda in Venezuela.

It is also important to find good progressive sources of news about Venezuela and not rely on any of the mainstream media, particularly the US-based big guns like the New York Times and Washington Post, to give an honest accounting. We also need to be wary of confusingly-named organisations like Human Rights Watch which uses a pretext of human rights to blame Nicolas Maduro’s government for the crisis imposed on the country by the US economic blockade.

If you want to confirm something, or fact-check a news report, I recommend Venezuela Analysis which publishes daily news updates and contextual feature pieces. The public interest journalism outlet The Intercept has been covering the US campaign to destabilise Venezuela for the past five years. Well-known left-wing journalist John Pilger is well-informed and has visited Venezuela many times. He is rightly critical of some of Maduro’s mistakes, but Pilger’s main point is that American imperialism is the immediate cause of the economic crisis and regime change will make that worse, not better.

Democracy Now; Jacobin; AlterNet and Counterpunch have good reporters and excellent analysis that does not follow the mainstream narrative or fall for the lie that Venezuelans would welcome American intervention and regime change.

5
Unlock 5 exclusive posts
Be part of the community
Connect via private message
Ethical Martini
is creating stories, art, and photographs to get you through the pandemic.
Become a patron