Skip navigation
We use cookies to improve your experience using this site. More information
Become a patron
Nov 25, 2019 at 10:16 PM
Ecological Catastrophe in Odessa (hits WAY too close to home) and a Clash of Geopolitical Giants!

I wasn't planning on this FREE post, but since it hits so close to home (you probably know that I grew up in Odessa, currently located in Ukraine), I decided to mention it and share some updated thoughts and conclusions with you!

Several days ago, in November 2019, an oil tanker overturned and spilled oil near popular Delphin (which means 'Dolphin') Beach in the resort, French Boulevard, area of Odessa. The video on top shows surreal footage of the fallen tanker.

The tanker was registered to a Moldovan company (Moldova, or Moldavia, is very close to Odessa geographically) and per reports it was engaged in illegal oil trade. It was understaffed, which probably was the reason for the catastrophe, and the crew had to be rescued by force, refusing to leave the tanker on their own, probably fearing to be found out. Officials say that as a result of the oil spill, the Black Sea pollution in Odessa region exceeded the norm by 160 times. The residents complain of a strong oil smell in the air. However, due to storms, the spill is being carried away from the shore, and the last reading is better: pollution 'only' exceeds the norm by 19 times.

This is past the beach season and tides/currents are strong, so the oil spill may be carried away to sea, which may be better for humans. But what about marine life? The Black Sea has many dolphins living there. What about them?!

Also knowing the attitude and lack of resources in Ukraine and neighboring Moldova, I doubt they'll do any meaningful cleanup, as they should, by law.

I'll tell you why this hits WAY too close to home! I grew up right next to the Delphin Beach - the beach our family favored - on the corner of the French Boulevard. At the time it was called Proletarsky Boulevard.

And now let me tell you exactly why people are forced to engage in illegal oil trade in that area of the world!

If Ukraine didn't become rabidly Russophobic as a result of the 2014 Kiev Maidan, aided and abetted by the collective West, this wouldn't have happened. The Kiev semi-Nazi regime made a big gesture of severing all historic ties with Russia. All that was done for show and in order to make people in the Russian-speaking regions, Odessa first and foremost, toe the line and forget their true roots.

But people and businesses still need to function. They still need gas, oil and various products and supplies. People still need to heat their homes, have their cars drive, they need to eat and work somewhere. Odessa is a major trade and shipping hub. You ban something that provides livelihood, what will people do?

Kiev keeps proclaiming that all trade with Russia has been banned. Therefore, various regions stuck in this nightmarish current version of 'Ukraine' have to figure out how to bypass Kiev's idiocy. So, they engage in illegal across-the-border trade.

Since Ukrainian vessels are forbidden to trade with Russia, they are engaging foreign vessels or register theirs abroad. These vessels arrive to Odessa, unload their products purchased in Russia, all the while pretending they got them somewhere else; then go back to Novorossiysk or one of Crimean ports (all Russia) and load up again. And on, and on.

Therefore, for the sake of presenting a 'pretty' Russophobic and pro-West picture to their US/Canada/Poland sponsors and to the vicious western-Ukraine ukro-nazis, Kiev and local authorities lie through their teeth. I previously told you about the Rotterdam Plus schemes, where the coal and oil purchased in Donbass and Russia was documented as European-bought, for much more money! Then oligarchs pocket the difference. Poroshenko and his cronies were getting a percentage for 'protection' of the scheme, mafia style. Currently, I am assuming, president-comedian Zelensky and his cronies have inherited this lucrative racket.

Same happens with natural gas. Ukraine pretends that it receives its gas from 'Europe' as 'reverse transit.' But anyone with two brain cells to rub against each other knows that you cannot transport gas in two directions simultaneously through one pipe. The gas always flows in one direction, from Russia through Ukraine, to the EU. Therefore, along the way, Ukraine simply takes out some of the EU-bound gas, but still charges Russia for the transit of that gas, plus pretends it now buys gas more expensively from the EU, while those in power and oligarchs pocket the difference.

THE END CONCLUSION -  A CLASH OF TWO GEOPOLITICAL GIANTS

Ukraine is a total, godforsaken mess! They simply destroyed the country and its economy. It's worrrying, in fact. Decent and mobile people continue leaving by hundreds of thousands. The IQ is catastrophically down; Calibration is down even more; there is no talent left and no one wants to really take care and rebuild the country.

And now we get to the elephant in the room! Wherever in the world the US interferes, mayhem and destruction follow. It was the US and its allies' intervention in 2013-14 that caused this horrific outcome. That intervention was due to the burning desire of the US elites, following Brzezinsky manual, to destroy Russia.

I previously explained why Russia the Great Balancer is so hated by the West and deep state/globalist elites. And why the US is cast in the role of the global super-bully.

Bottom line, the world is changing. The Earth Shift and Global Rebalancing are underway. Too bad Ukraine, and especially the beautiful city of Odessa, have fallen prey to the desire of certain evil elements to stop this process.

Ukraine is caught between tectonic plates and the clash between geopolitical giants is ongoing on its territory. And the poor Odessa is stuck in the middle.

IF YOU ARE NEW,

Be the first to hear cutting-edge ideas and revolutionary predictions! Get exclusive insight, rewards & discounts!

Also if you are new,

Check out my work, where I explain about the Earth Shift, Russia the Great Balancer, and more! Visit LadaRay.com for freebies, trademark Earth Shift Webinars & Reports, Consultations and more! 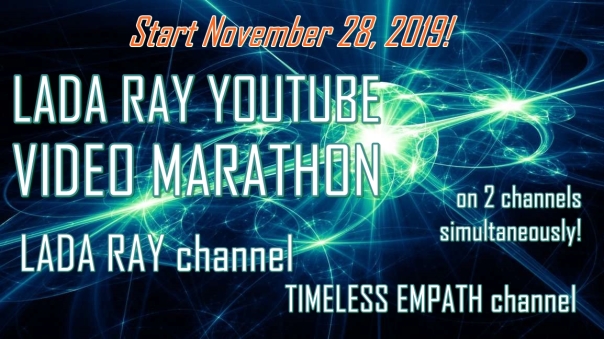 Stay tuned to my announcements on November 27-28!