Skip navigation
Become a patron
Dec 4, 2018 at 10:57pm
A Feeling I Can't Explain (2013) [Repost]
Heya! Tumblr is possibly  (probably) shutting down over the next two years, and many users are leaving.. so I'm going to be reposting some stuff I'd previously hosted there. Just in case! Unfortunately, there aren't many platforms available for good text-photo combo blog posts. But hooray, Patreon seems to be cool with the format! So the following is a post/PDF-story I made in 2013. It's old but it doesn't deserve to be lost to the aether.. so enjoy!

I love capturing moments and sharing them. This is why I make videos, comics, blog posts, and whatever you call these stories. When something funny happens and you laugh about it, you can put that moment in your pocket for later. You can tell people about it, but you risk the “you had to be there” dip in conversation. 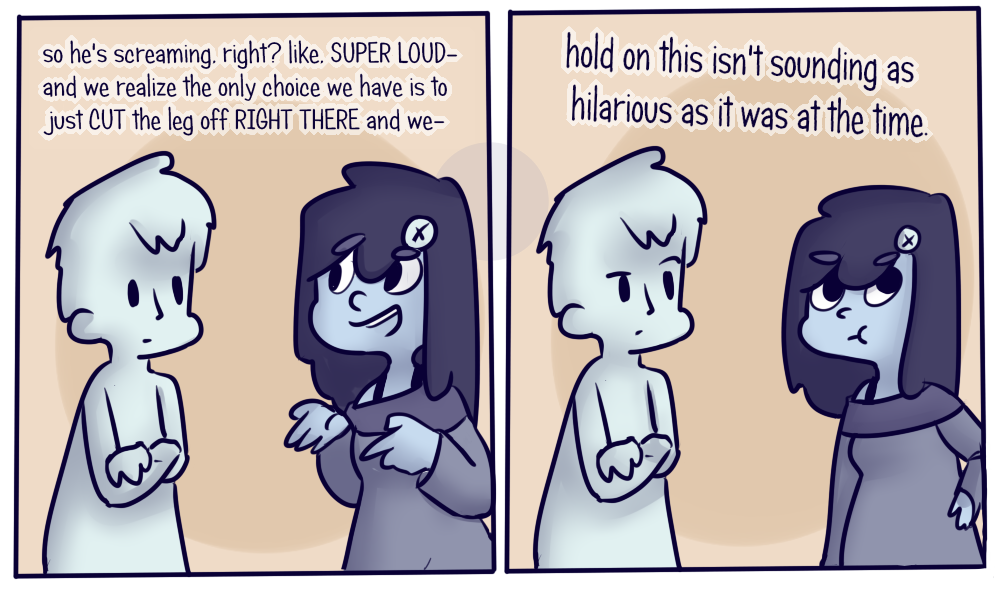 I always hated the chance of that outcome, making you doubt yourself on whether that moment you had was really worth sharing. You can reference it to friends, but then you can also make content about it to share with the world. I can make comics to share funny things that happen and I’ll never have to say “you had to be there” because the reader can feel like they experienced the moment too.

This is what I really love about comics based on actual events! It’s like sharing the experience itself with someone with all the little parts you think matter. But those things that matter are what you remember most about the situation- what was said, reactions, and context. That said, I don’t think I will be able to capture a moment where nothing actually happened. At least, not in a simple 6 panel comic. It’d actually be really boring if I tried. Look, here, I’ll try right now: 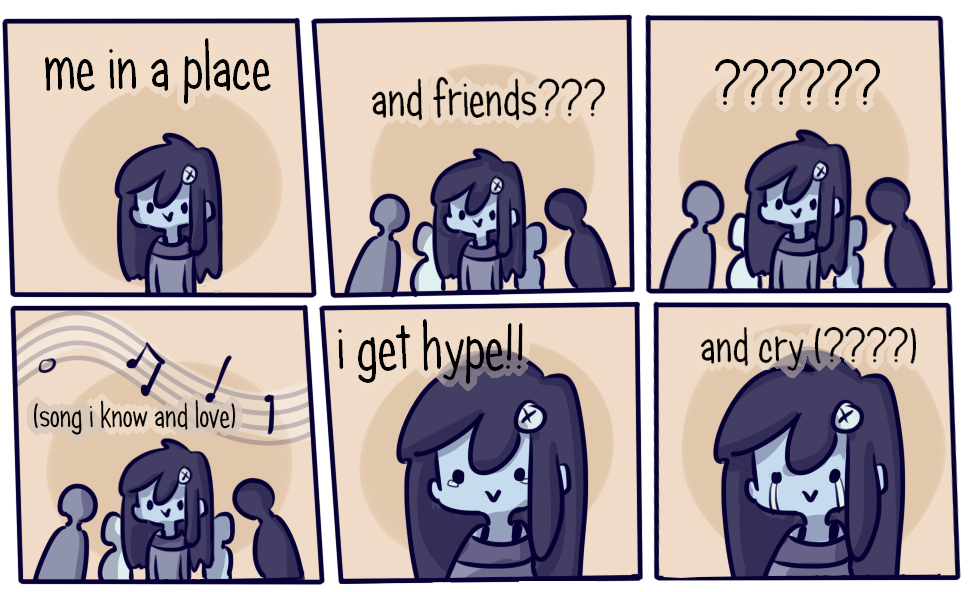 See? It doesn’t make a lot of sense without a bunch of arrows explaining things and context spat everywhere. So it just looks like a zero-point comic without a punchline. Which I mean, would make sense, as there isn’t really a punchline anyway. Just a feeling I’m trying to make clear.

I’m not sure if this feeling crosses over to a lot of people, but sometimes things just feel like they line up perfectly. Almost like you’re staring at yourself from the outside as you’re actively appreciating the moment. I assume it does, at least. Things just feel very special. Kind of like when you’re watching a movie and at the end everything comes together and the soundtrack plays a reprise of a song that was played earlier in the film. Or when an instrumental version of the opening theme of a show plays during the show’s finale- that satisfied surprise that you get that almost feels like something inside of you shattered. 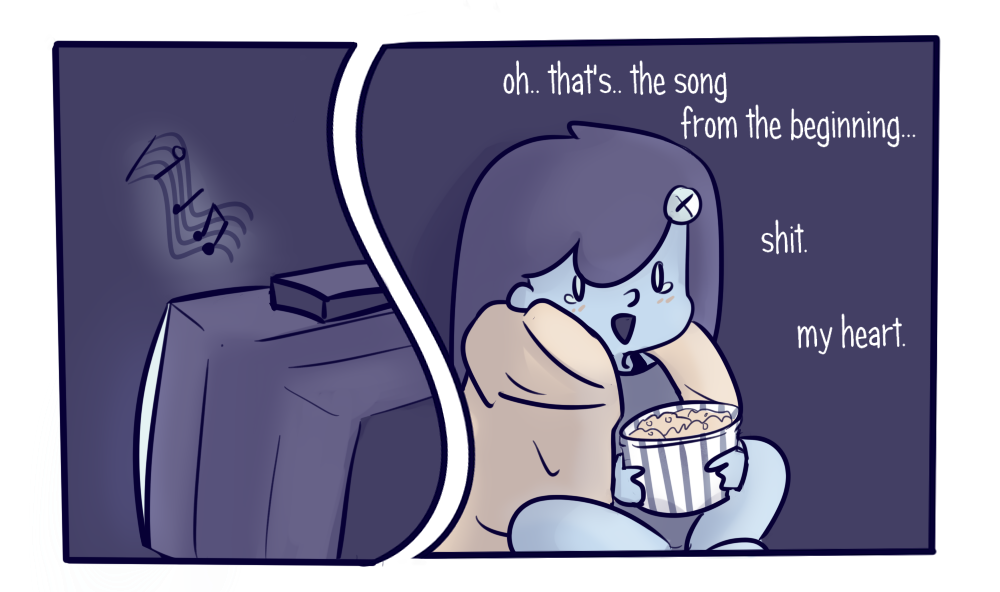 Imagine that same feeling, only carried over to your own life and situations. It’s fulfilling and surreal, but it happens just rare enough for me to appreciate it every single time.

I’m worried I’m not making a lot of sense so I’m going to try and give a clear example. In 2013 I visited my long distance boyfriend for the first time. I stayed with his family and was able to explore his corner of California with him. Let it be known that being in new places often scares me a lot and makes me very anxious, but after some time of being in California I was able to relax and just trust my boyfriend to take me where he thought would be fun. For the first time in so long, I was able to relax.

It was a lot like a dream- new things constantly happening that I didn’t understand- but I was okay with it! I wasn’t scared, I was excited! As someone who doesn’t get that a lot, it meant the world to me.

He knew I loved arcades. I’ve only been to a few really tiny crappy ones growing up because Southwest Florida (within driving distance of what my family was comfortable with) doesn’t have a lot to offer for a kid. I had never been to a Dave and Busters arcade before that trip to California. Needless to say for an arcade dweeb like me who hadn't experienced much in life, 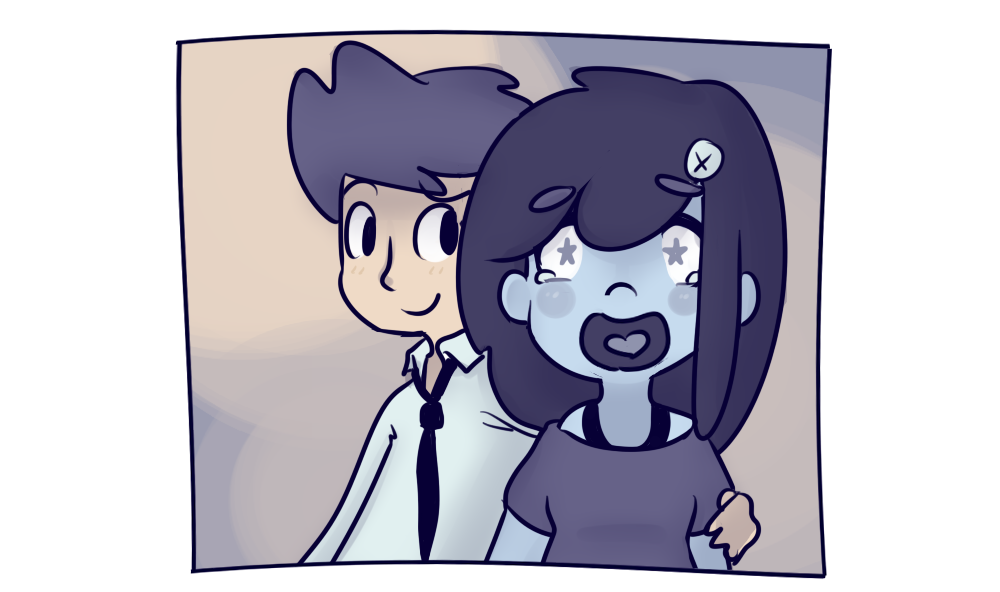 After spending our money, playing the games, and winning the prizes we wanted, we pocketed our D&B card and left to get some food. Absolutely everything just felt right.  I was getting to go to a big arcade with my long distance boyfriend and on our way out we were walking very quickly, eager to get food and talk about what we’d be doing next.

I was smiling so much my cheeks were aching. 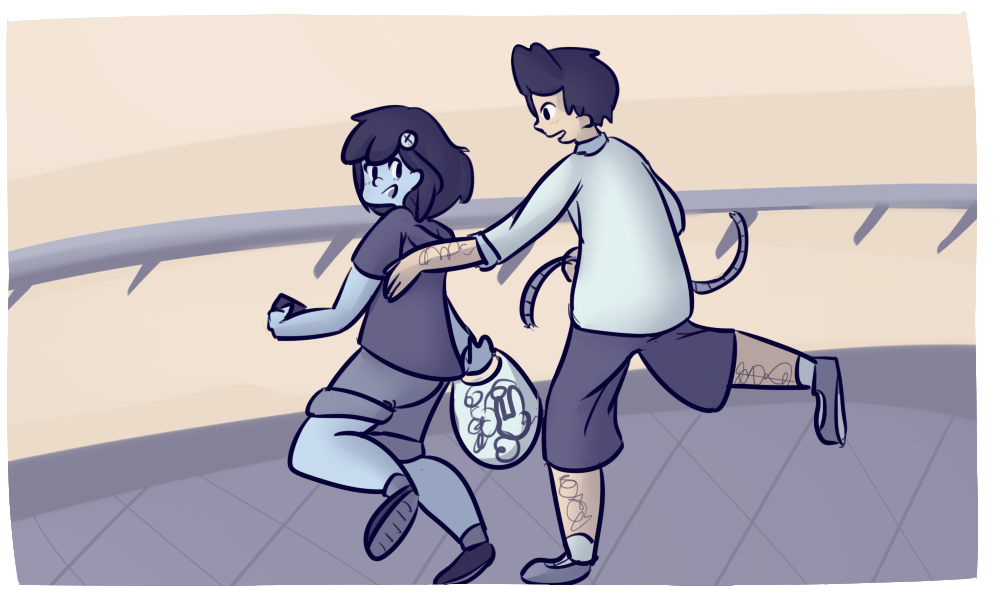 We’re rushing on our way out, almost running. I don’t remember there being a reason for us rushing at all, but we were laughing the whole way. I felt like a little kid with absolutely nothing to worry about. We ran down the slope to the entrance of the arcade as the floor beneath us started pounding in tune with a melody playing on the speakers. By the time we reached the concrete outside I remember slowing down and actually taking in the situation. Is there a word for that? When you look around and realize “I’m going to remember all of this” because a moment is so special?

It probably happens at weddings and graduations… Well for me it happened on my way to lunch with my boyfriend leaving an arcade. That… actually says quite a bit about me, I realize. 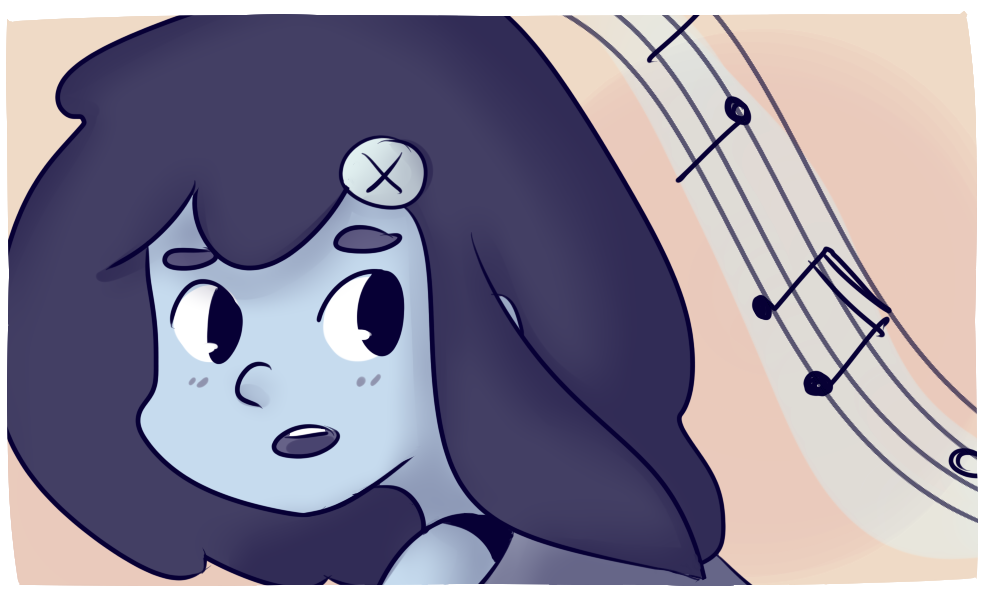 This was about when I was stumbling onto the top songs of the season. For the longest time I’d just listen to what I found online. I didn’t listen to the radio because I didn’t go outside much and I didn’t watch television, so I didn’t really know the top songs. My song library consisted of the indie artists I found online, some JPOP from years before, and a mess of chiptune.

Then I started tripping across the top 40 (without any knowledge of it being so) and added them into my library. Even if they were songs everyone was used to hearing (and possibly sick of), they were special to me because I felt like I tripped across gold. And I didn’t expect to hear those same nuggets of gold on the radio when I seldom did go out. 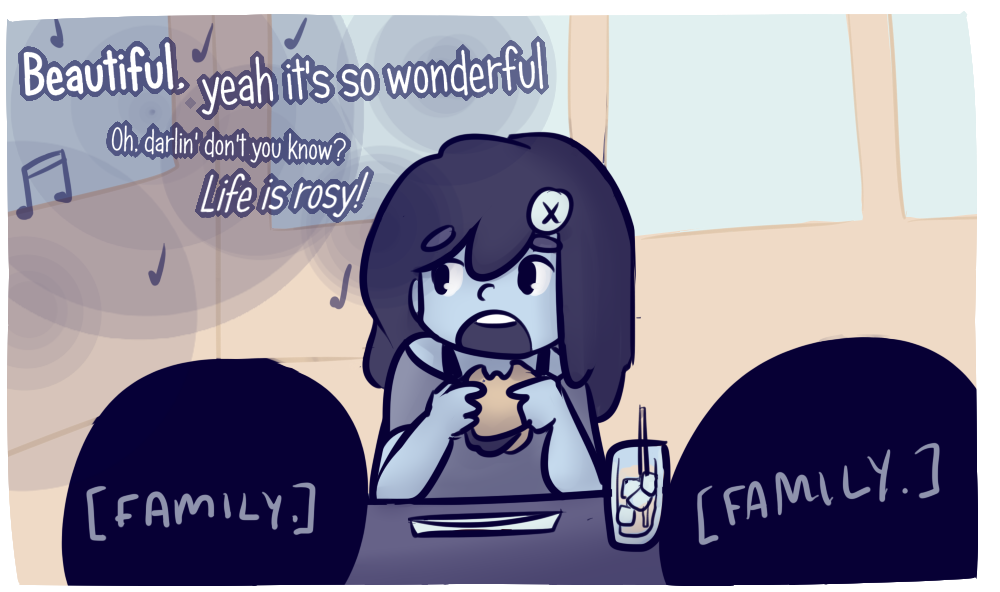 When those two instances mix, (me knowing a song and the song playing in public), I get ecstatic. I feel connected to something from recognizing the song- it’s like I know the future. I know the lines coming up and the melody and tempo changes. Life forms itself around the song playing and I feel surreal because I know more than my thoughts in that moment. I know more than my future actions and phrases, so I start to feel almost out-of-body just to appreciate the moment. 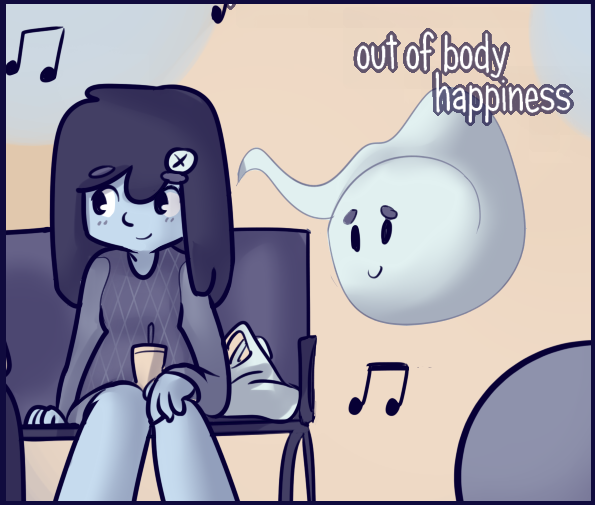 But back on track, right? I could talk about other instances of this for days on end- and while that would be content for this PDF it feels a bit like cheating to just end the story I already started.

To emphasize, there I was, running through Dave and Busters with a bag of prize goodies and someone I love and waited so long to see- on my way to lunch while a song I know and love begins to play. I know the melody, I know the lyrics, I know exactly where my life is in time with the song that’s playing.. and I’m excited! Overwhelmed, even.  But I’ll never be able to capture that feeling in a comic or a video without all this context explained behind it. I’ve tried, so many times! 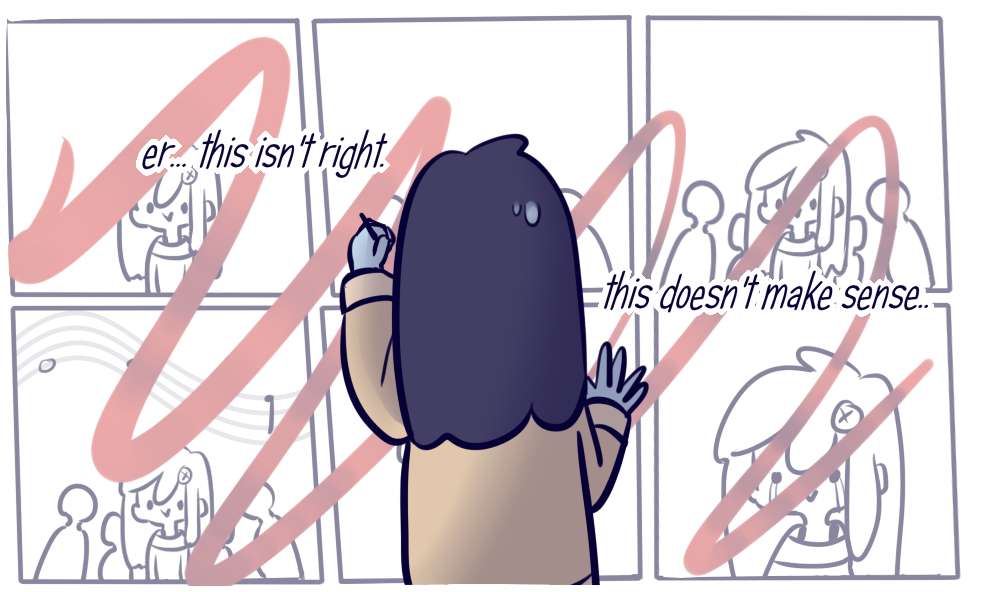 I cry a lot, whenever stuff like this happens. When I’m just so incredibly happy and I can’t do anything about it, I feel like I can’t contain myself. It’s bittersweet every time because being THAT happy feels like it’s life-changing. But I’ll never be able to share it or retell it and get the same effect. It’s like a shot of energy and emotion in that moment where everything just feels like it’s in place. It’s really beautiful to me and even if the feeling is fleeting, the memory of it sticks with me for a long time.

I swear I’m telling you this next part for a reason:
I always got choked up when I watched shows and music videos growing up of friends having fun together. People that love each other going on small adventures to the corner store at night, watching movies all day, or driving until the sun comes up in their small town. I craved what that must have felt like, to be that close to people and to feel so in tune with the moment. As a fan of “The Perks Of Being a Wallflower” I wanted to know what it felt like to be “infinite”.  I wanted to feel like I was in a music video and explore the town with people I feel close to. But with my lack of a vehicle, or a license…. or a town worth exploring… or local friends… I’m getting off track, you get what I mean.

Sometimes there’s music I listen to which sounds like the closeness to a (local) group of friends I’ve yet to meet.. 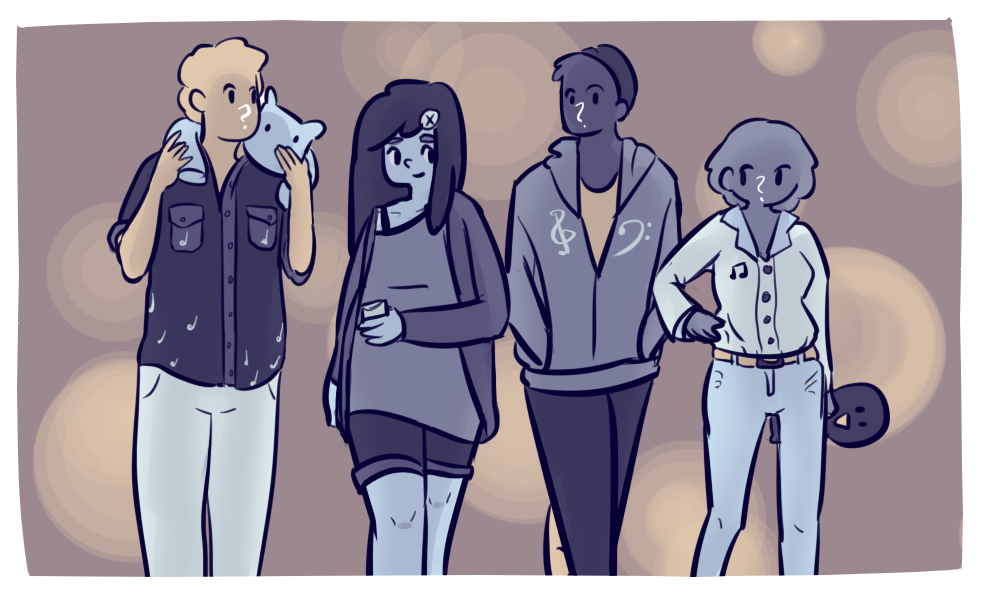 I didn’t know if feeling like you were in a fun-teen music video was something achievable in real life until I visited my boyfriend that summer. And though I was no longer a teen, I still count it. Though it was scary at first, considering I was outside of my state for the first time, it was magical.

I still don’t know if being “infinite” is the same as what I’ve experienced. If so, it might be something I can vaguely describe, but it’s a feeling I can’t explain. [end/2013]