Being in quarantine requires a shift in how we live our day-to-day lives. With many forms of entertainment no longer an option, we have to come up with new ways to stay busy using only what we have on hand. For some, this means inventing creative new at-home workout routines. For others, bread baking is becoming such a common pastime that stores are literally running out of flour and yeast. Perhaps the most worthwhile of all quarantine activities, though, involve making life better for someone else. Maybe you’ve taken up sewing masks for healthcare workers, or perhaps you want to help on a more personal level by becoming a crisis text line volunteer. However, if you’re anything like Kennya Ramos, making a positive difference started even closer to home. 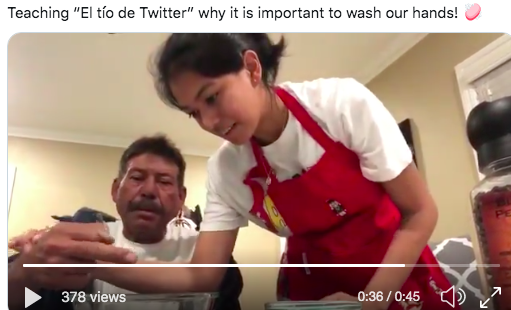 Kennya’s uncle Felipe grew up in Jalisco, Mexico. He spent most of his adult life working in construction while raising two daughters and grieving the loss of his wife. One year on Christmas, Kennya noticed that the names written on gifts from Felipe were horribly misspelled. When she asked her uncle about why he didn’t know how to spell his family members’ names, she made a surprising discovery. Felipe had never gotten the opportunity to learn to read or write. At first, Felipe was ashamed and rejected help, stating that he was simply too old to learn.

Slowly, he began to give in, and every once in a while he would allow Kennya to work with him on writing his own name. When he mastered that, he moved on to learning his daughters’ names. For the Ramos family, the quarantine has brought new significance to the idea of “home school”. Uncle Felipe finally began to let himself learn.

“I wrote the names of his grandkids with a highlighter and had him trace it with a blue pen. That was his first time writing his grandkids' names. It was extremely emotional and monumental for me, so I couldn’t help but share”, said Kennya of the now viral photo. After the explosion of the tweet and outpouring of support for her uncle, the family was moved to tears. 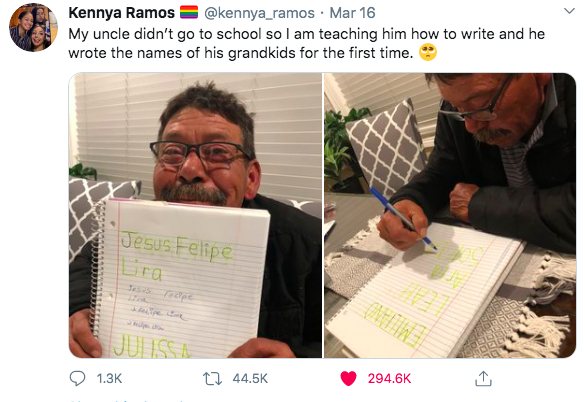 “Many times he has been bullied or screwed over through contracts for not knowing how to read.” Kennya explains how people are often quick to judge Felipe after realizing he struggles with literacy, but in so many other ways, Felipe is skilled and highly intelligent. “He may not know how to read and write but he can build you ANYTHING within a blink of an eye”.

Yael
is creating Good News ONLY
Become a patron