This is part 1 of 2 of my latest analysis that seeks to convert the unfolding Coronavirus Pandemic into a stock market trend forecast, a pandemic that increasingly looks likely to be the worst the world has faced since the 1918 Spanish flu that killed an estimated 10% of the world's population. Thankfully, so far this virus looks set to kill less than 1/10th that of the Spanish flu, still extremely deadly that the markets are NOT fully discounting the consequences of and that the virus could mutate into an even deadlier strain that it has already done at least once to date ( S type into L type).

Just how deadly is the Coronavirus? For the answer to that we look to the case fatality rate across a number of infected countries with differing capabilities in their ability to test for infections and then to compare against the conclusion of my analysis of 21st February that took into account serious under reporting in the numbers infected in China, probably to a magnitude of at least X7 that concluded in a probable Coronavirus case fatality rate of 0.64% which if accurate would make the Covid-19 about 15 times as deadly as the seasonal flu. 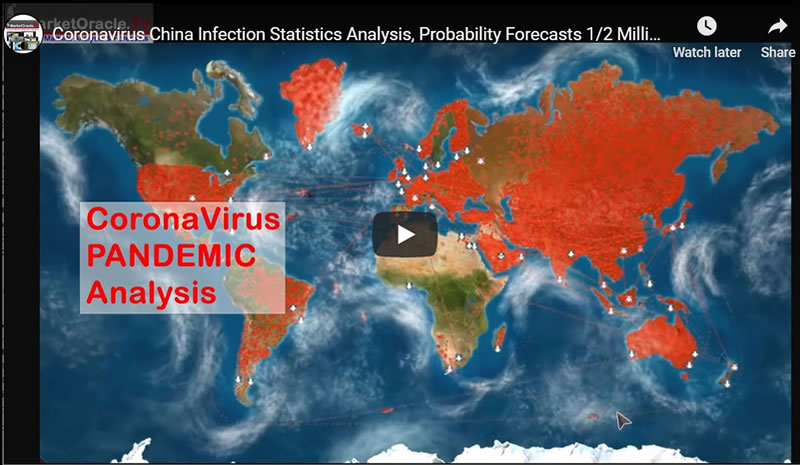 So now with several more weeks of infections data from a range of nations the most important of which is South Korea, for which my analysis of 26th February ( https://youtu.be/pJq4S5J84FE ) concluded was likely to be the most accurate in terms of recording the numbers infected and thus a good harbinger of what to expect to play out in the West during March.

The latest reported infections data as of 5th of March implies the following case fatality rates across a range of infected countries.

The total global reported cases of infections of 98,424 resolves in 3386 deaths which implies an horrific case fatality rate of 3.44%! Which if true would translate into about 40 million deaths at 15% infected (seasonal flu infection rate). However this is heavily influenced by Chinese data which my analysis of 21st February concluded to be inaccurate to a significant degree by not having tested many hundreds of thousands of infected chinese people.

Whilst outside of China the case fatality rate drops to 1.93%, which is still very high and would result in 22 million deaths if true.

As for South Korea, the nation I deem to be the most accurate predictor of just how deadly this virus actually is, well their data now resolves to a case fatality rate of 0.64% which is EXACTLY the same as my conclusion of 21st February, and which implied to expect 7.5 million deaths world wide.

So as things stand it is highly probable that the case fatality rate that western nations can expect to experience is going to resolve to between 0.64% and 1% with variations depending on the effectiveness of response in acting to contain and delay infections and general quality of healthcare systems, and any mistakes made such as the incompetence of the America's CDC by failing to send out working test kits during February that could now result in a higher US death toll than what would otherwise have been the case.

For the UK 0.64% would convert into about 62,000 deaths, whilst for the US about 365,000 deaths. Though again the CFR is highly dependant upon the effectiveness of response to virus outbreaks as Iran illustrates which is likely to experience a far higher case fatality rate than 0.64%, where official figures resolve to a CFR of 3.07%, though the number of infected and deaths are likely to be several times higher than official data.

We in the West are now at the very beginnings of this Pandemic as the US has reported just 13 deaths against the UK's 1 death. So what are going to be the social and economic consequences if the Pandemic runs it's expected course and the number of deaths in the UK gets anywhere near 62,000! As I imagine news reports of the number of deaths exceeding 100 death would trigger much fear amongst the general population let alone what 1000, or 10,000 or 50,000 reported deaths would trigger! Already people are clearing UK shelves of hand sanitizers and toilet paper on the basis of barely of 100 infected and just 1 death!

And then we have the issue of evolution, where the virus already mutated back in January into two strains, the S type and L type, where the older S type is less deadly and infectious. Worse still patients can be infected with BOTH types. So lets hope that the Chinese have managed to suppress the L type and that most of the cases outside China are going to be the older S type as having had more time to spread than the L type which prompted China to deploy extreme measures to prevent the spread of.

The latest official infections data, which despite a proper record of Africa and the South Central America's numbers has the number of infected literally going parabolic, soaring by nearly 3000 overnight to 17,855 to well above my trend forecast that projects to an official tally of 129,250 infections outside China by the end of March 2020. 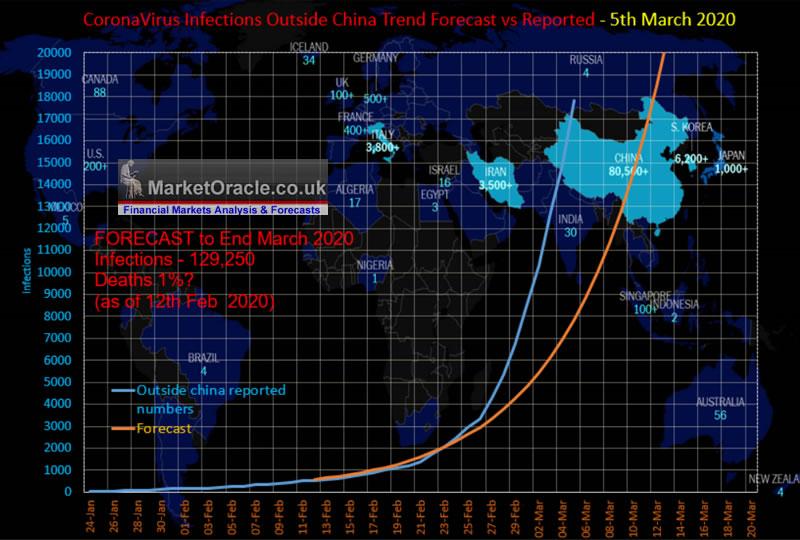 Were this trend to continue into the end of March 2020 then the number of infected outside of China would total 290,000, which would not bode well for what was to come for April and May 2020. Whilst the number of deaths could be estimated to be at least 19000 based on a case fatality rate of 0.64% as per the conclusion of my analysis of 21st Feb.

The total number of infections recorded in the UK has now started to go parabolic, exceeding my trend trajectory for the first time due to increasing community spread that has finally prompted the Government and NHS to start getting their act together and respond to the unfolding crisis. Though it has always been a case of reaction to events rather than taking proactive actions such as the fact that the UK should have suspended all flights from China by the end of January, instead they continued to let infected Chinese nationals into the UK who went on to spread viral particles. The UK also recorded it's first death that I forecast to total at least 90 by the of March with far worse to come in April and May if the pandemic is not contained.

My US trend forecast is for 13,000 infected by the end of March resulting in about 180 deaths. Though the actual number may turn out to be significantly higher because I see little sign that the US is taking the Coronavirus seriously enough, where many are still shrugging it off as being not that much worse than the flu such as President Trump. Instead it is at least 15 times as deadly as the flu, and depending on quality of response and healthcare could be 100 times as deadly which is reflected by US deaths exceeding my trend forecast of i.e. 10 actual against 4 forecast.

The bottom line is that most western nations have been sat on their arses for the past 8 weeks and done little or nothing in the face of the coming Coronavirus storm. We'll that storm has now arrived! Which is sending the likes of the British and US governments scrambling to play catchup. America's CDC panickingly ordering millions of tests that are due to start being delivered next week, something that should have been done at least a month ago!

Whilst he UK has barely tested 15,000 people! a drop in the ocean that ensures that the pandemic is going to rage and as more people will be tested over the coming weeks then it will be found there are thousands of people already infected in the UK who will make their way into the statistics over the next few weeks. Still it could be worse as the US has tested less than 1000 people at a time when they should have tested closer to 1 million! Something that China is doing every 6 days! Which is down to the fact that many people are being typically CHARGED $3,000 to get tested for Coronavirus so even when showing symptoms many are not likely going to want to go and get themselves tested at a cost of $3k!

Once upon a time I thought the West would handle the Coronavirus crisis a lot better than China, now I am not so sure because the likes of the NHS in Britain and the CDC in America have been shown to lack competency which is compounded by America's healthcare system that puts $$$'s before trying to stop the spread of the virus which is a recipe for disaster!

This analysis continues in part 2 to follow this weekend. Though my message to date should be clear that this bear market is a LONG way from hitting bottom, likely several months away.

So is the stock market discounting what is to come? NO, NOWHERE NEAR! Whilst I will cover the prospects for the stock market in my next analysis as the focus of this analysis is the prospects for the Bitcoin price. However, I do not see any signs for an imminent end to the Coronavirus bear market, instead it looks like it could run on for several months, i.e. it's increasingly looking like it could be May before we see the bottom!