Skip navigation
We use cookies to improve your experience using this site. More information
Become a patron
Aug 11, 2019 at 4:15 AM
How to make best usage of MTGAHelper

Here is a short recap on how you can leverage all the MTGAHelper powerful collection and deck tracking features. The core of the system lies in which decks you are tracking so this is quite important.

1. Go to the Deck sources page and select a bunch of sources that you want to track decks from. You can track decks from various streamers or from the current Meta. Your tracked decks will drive all the calculations for your missing cards weightings.

2. On the Decks to play Advisor page, you can then view all the decks from all the sources you've chosen to track, while being shown which ones you can currently build and which ones your are closest to completing. You can also fine-tune which decks you're tracking ever more. For example, if you want to track only a few decks from a given source, you can stop tracking decks on an individual basis here.

4. Finally, the draft helper is also driven by your tracked decks. You will get useful Raredrafting information during your draft picking including the weight of missing cards, helping you make better decisions about choosing to raredraft in order to complete your tracked decks with cards coming up in the draft. Here's how it will look: 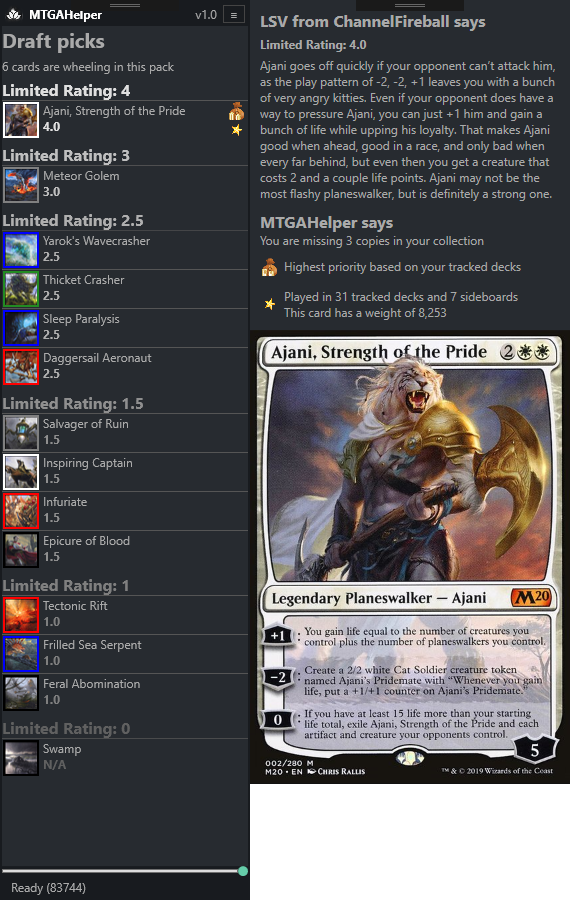