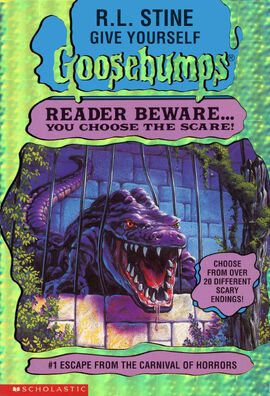 Give Yourself Goosebumps #1: Escape from the Carnival of Horrors

How should I start these? Perhaps with what I'm drinking? Well, the night started promisingly enough with a Red Pale Ale and now continues as I sip half a Java Lava mixed with a half shot of bourbon. Booze FTW! And what am I reading? Well, I'm taking a look at the first of the Give Yourself Goosebumps series, Escape from the Carnival of Horrors. Which combines tons of super scary things. Like…jumping fences? Seriously it's easy to date these books to BEFORE NOW because middle class white kids are allowed to be outside all hours of the day somewhere that the carnival is setting up. Which is sketch af but oh well, I guess. The book tells me that there would no adventure without such nostalgia-fodder so I guess we press on.

You are you, as long as you is pretty definitely middle class suburban and white. But pick whatever gender you want, as long as that gender comes with a rather classically wimpy male best friend and "bossy" (or as we say these days, competent) female not-so-best friend. Dude-friend is Brad and female-friend is Patty. These are children's books so it's only vaguely inappropriate for me to imagine what kind of kinky stuff these kids get up to later in life. And let's talk about the friends for a moment. Brad is about as interesting as a sack of wet marbles, and does precisely zero things the entire book regardless of what path you choose. He is literally the worst. But Patty. Patty is the most compelling part of this book. Stay with me here. My crazy theory about this book is that Patty is some sort of world-devouring monster bent on world destruction who's been playing this long con as a little girl so she can mess with your head. Hear me out. She's the one who gets you to go over the fence. And there's this one throw-away path where you stop wanting to play along and she transforms into a giant monster and eats you. Now, this being a throw-away "bad" ending aside, she says that she's not going to let you ruin her plans in this branch. Which means that all of this is all some sort of experiment and your death is completely meaningless. You're just there to work the proof-of-concept. Which, because it's never directly contradicted anywhere else in the story, means that Patty is a monster the entire time and just FUCKING WITH YOU FOR SOME EVIL PURPOSE. I basically love her for that.

But ahem, back to the book. You find yourself in the Carnival of Horrors which is totally different from Horrorland despite having one of Horrorland's rides and basically the exact same premise. But yeah, you're stopped by Big Al, who is the most legit of all carnival managers and when he's not selling used cars in the off season he's giving children free passes to his carnival for one night only. Really most of the stuff with Big Al is pretty shit. You get the option early on to go either towards the rides or the games and the games are pretty stupid in my opinion, and obviously tacked on to make the book up to count. There's technically one "good" ending in each of those trees but the one in the games is, again, pretty awful. There are also like two "good-ish" endings that I find a bit more satisfying (one you get to free the people trapped in the "freak show" and they come to live with you and the other you accidentally destroy probably most of your town, so hurrah).

I should say that this a weirdly meta book in some ways. There are actual references to other Goosebumps books that you and the characters recognize as books in the fictional world. Which is a certain kind of mindfuck. Because it means that inside the world of Goosebumps there are Goosebumps novels. In-game it allows the book to cross-promote with its main line of books (Monster Blood, Night of the Living Dummy, and Welcome to Horrorland), but the implications of this are maddening. I'm actually a little jealous that Stine got to basically write a fictional world where his books are so popular and IMPORTANT that they can save your life. I want to do that in my stories now, just have people randomly talking about how crazy good this story they read in Lightspeed Magazine was. Which one? Oh, you know, "Rubbing is Racing," the best short story of all time. Can I fictionally give myself awards, too? Can I write about myself writing novels that I won't get to or wouldn't sell? Suddenly everyone in my stories will talk about the even-more-popular-than-50-Shades series of werewolf waterpolo erotica that I wrote. They'll go to the movie! They'll buy the GODDAMN PLUSHIES! I am drunk on authorial power and booze and nothing can stop me!!!

Ahem, sorry about that. Where was I? Right, this book! So I am a methodical choose your own adventurer—I have my special bookmark (backer swag from Ryan North's To Be or Not To Be) that I use and I hit every path possible, trying to save the "best" path for last. And for this one I feel like it was pretty easy to do so, which means it's predictable, yes, but also works well under CYOA rules. There are a few places were the tree will suddenly branch into another tree and those instances are handled…mostly well. If you're ten and under you probably won't notice. But it's pretty obvious some of the time what's going on. I like how a larger picture appears as you go, though. The nature of the carnival as some sort of dimension hopping horrorfest. With ghosts! Or maybe zombies! It's cute, if also kinda terrible. If my graphic doesn't give it away, it reminds me a bit of Night Circus, what with the creepy rooms and everything. But mostly it reminds me of Welcome to Horrorland, which I mean makes a lot of sense because yeah. The whole "Must get out by midnight or you're trapped forever" was a nice touch, as was the escape route that the "best" ending used because it was the one mundane thing in the park that the kids were ignoring it because boring af but it turned out to be their salvation.

I also like that for all there was this vague sense of what was happening, that the carnival traveled around collecting people to populate it, there was only the vague hints of why. Again, even Big Al admits that he's not really in charge, is just the manager, and so I'm still left to conclude that Patty is the secret controller of the Carnival of Horrors. There's a brief moment where it might actually have been made by Frank N. Stone, mad scientist extraordinaire, but then he turns out to be a robot so no dice there. And even in the "best" ending, Patty basically tries to steer you away from getting out until she can't avoid it without being super suspicious. Which means that even in the "best" ending your not-quite-best friend is still secretly a monster with plans that run beyond you getting out. So even when you win it's just part of some even larger and more elaborate plan that Patty has. I approve of this. Also I approve of petting alligators. That was a rather adorable moment, tbh. And the bouncing ending! Oh my glob the bouncing ending, where you just randomly fall onto a trampoline and keeping bouncing FOREVAH!!! And boy, does it feel good!

Truly this is the stuff of Nightmares. But yeah, I'm not even sure what I should be doing at the end of these reviews. Do I rate this? Sum up my thoughts? I wonder if Brad is in on Patty's diabolical plot. In my official Goosebumps headcanon Brad is Patty's assistant but has a secret crush on you and so helps you along by being a wet blanket and suggesting kiddy rides. In college he will confess his love to you over one to many beers and ask you to fuck him and you'll have to choose. Of course by then you'll know of Patty's plans for the destruction of all things and you'll be pretty okay about that, really, except something in your heart tells you that if you take Brad then you'll be drawn into the Resistance and the futile hope that Patty can be stopped. And what will you do then? (I wonder if Patty would let you both be her playthings…) ANYWAY! The book is…well, it has its moments and it's kinda fun. On a would-I-write-fanfiction-about-this scale I would give it four kinky yeses out of five. On a how-good-is-it scale it rates two stars and that's probably generous. On a how-good-is-it-for-Goosebumps, though, I'd say it's a four-star read. Above average for the series. Indeed.

I hope you enjoyed this! If you want more and don't already patronize me, become a patron and help me make monthly Liver Beware! reviews a thing! Future installments will be patron exclusive! Thanks for reading!!!