Lord Arioch is creating content you must be 18+ to view. Are you 18 years of age or older?

Development of the next release is on track for the end of the month as usual, and I don’t have much to add to what we talked about last time, so what I am going to focus on today is an overview of ongoing development; both our progress since we launched on Steam, and our roadmap (as seen above) to finish the current act.

First up, our progress. To show you how things are going, I thought it would be a good idea to start with some numbers. Since we launched on Steam last year, we have added to the game:

On the content side, that includes the completion of the Greyhide, Cliohna, and Shaya NPC arcs, as well as significant progress on Draith and X’zaratl. In addition to the new CGs, Sommy has almost finished revising nearly all the old CGs to better suit the game’s aesthetic, with only Alexia, Ameraine, and Helayna’s CGs remaining.

Beyond the numbers though, we have also completely overhauled the game’s core mechanics, which was a massive undertaking mid-project, with not only a number of new systems being implemented but nearly all of the game’s older scenes being re-evaluated and improved to accommodate the changes. It would take all day to discuss every change we’ve made, so here are a few of the key ones: 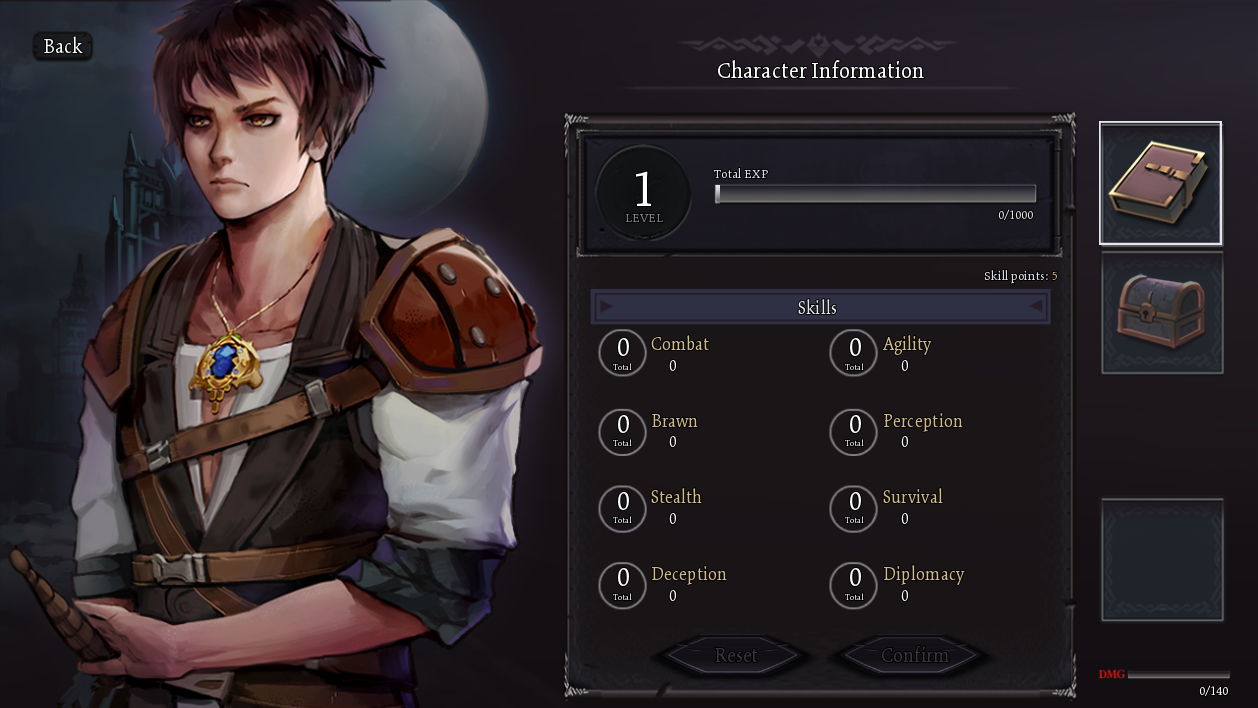 Accessed from Rowan’s chamber, it can be used to level up specific skills in order to improve your ability to pass certain skill checks, see what items you currently possess, and view wounds (a completely new feature - wounds accrue as Rowan takes damage, temporarily hampering his skills depending on the type of wound).

In addition, we’ve also added a long-requested feature: players will now be able to get a vague idea of how much corruption and guilt Rowan currently has based on visual clues on his status page illustration. 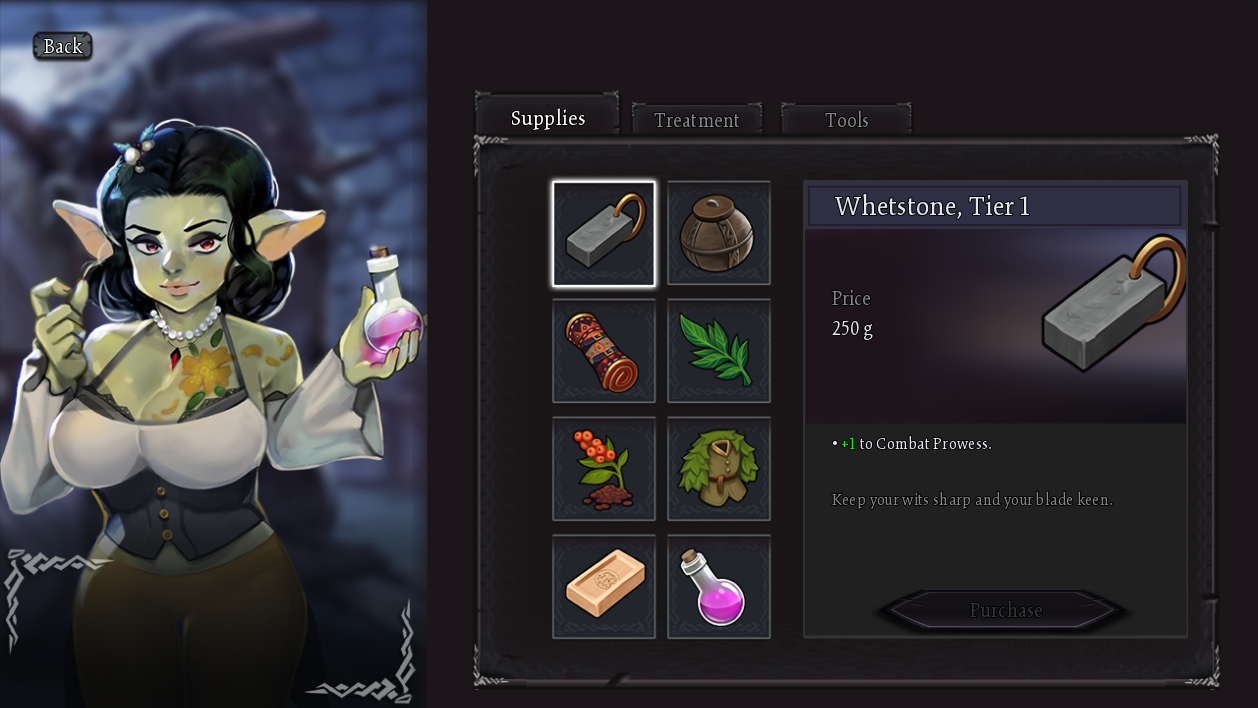 Cla-min’s shop has been reimplemented with new items and new features.

Players can now spend their excess gold on items that give them permanent boosts to skill scores, tools (items needed for quests or other triggers), or to remove any wounds that they may have accrued during the course of the game. 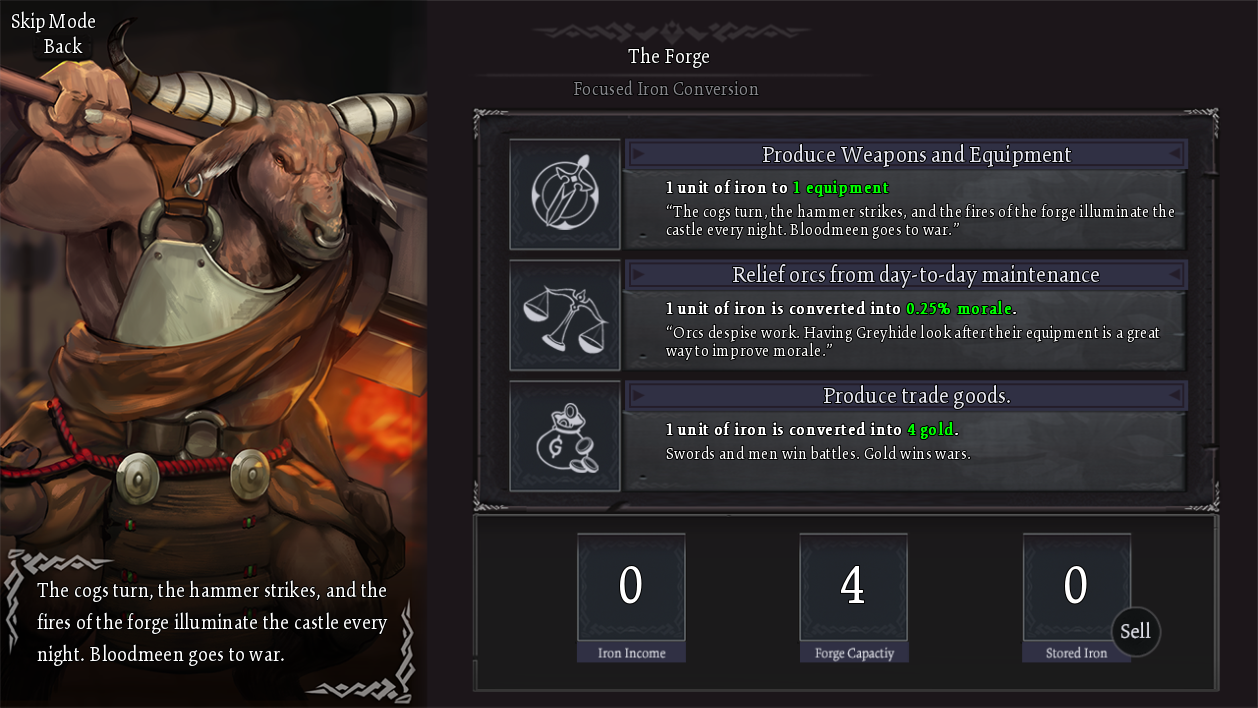 Greyhide’s forge has been expanded, allowing more player choice on what to do with the iron collected from mines.

Instead of all iron automatically being converted into equipment, you can now choose what Greyhide does with it. The original option of having it converted into military might is still there, but you can now also use it to improve morale or generate money for the treasury, allowing the player to more directly manage the castle. 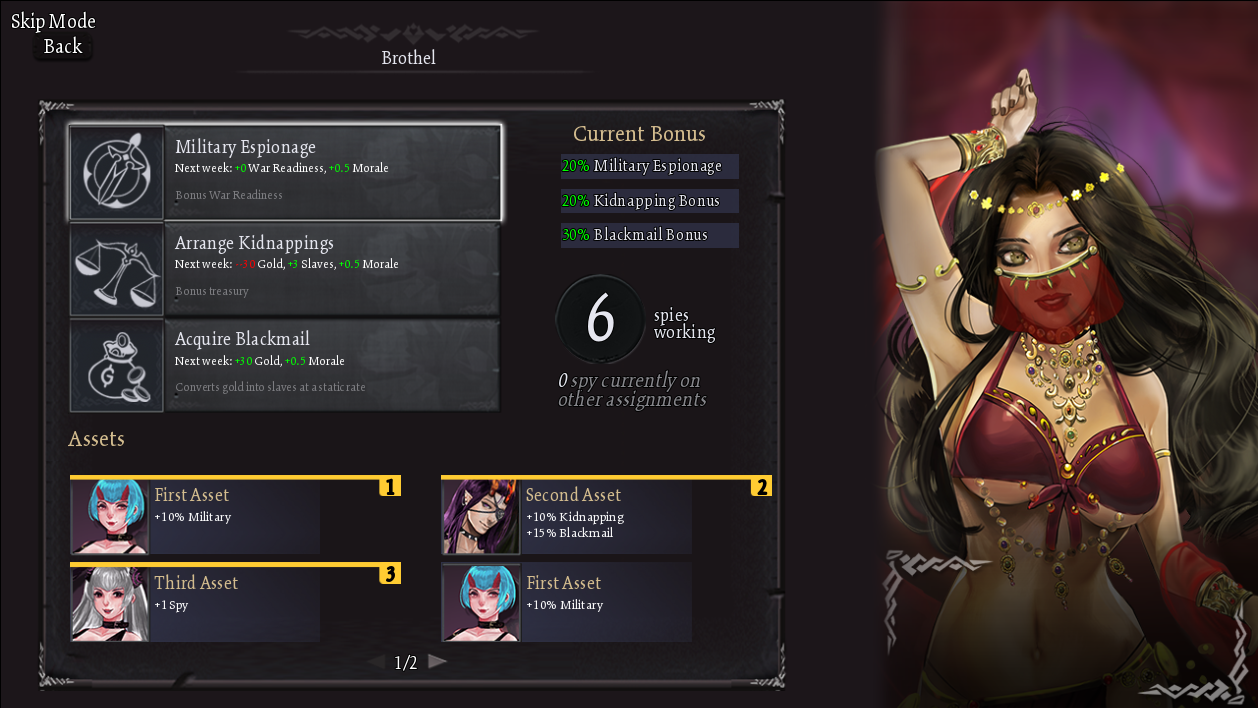 Shaya’s brothel has also been overhauled, allowing for a lot more options on how to use spies.

Assigning spies to capture things is no longer the only use that spies have, in addition, they can now be assigned to other missions; espionage, kidnapping, and blackmail. Giving the player yet another way to help balance out the day to day needs of managing the twins' armies. 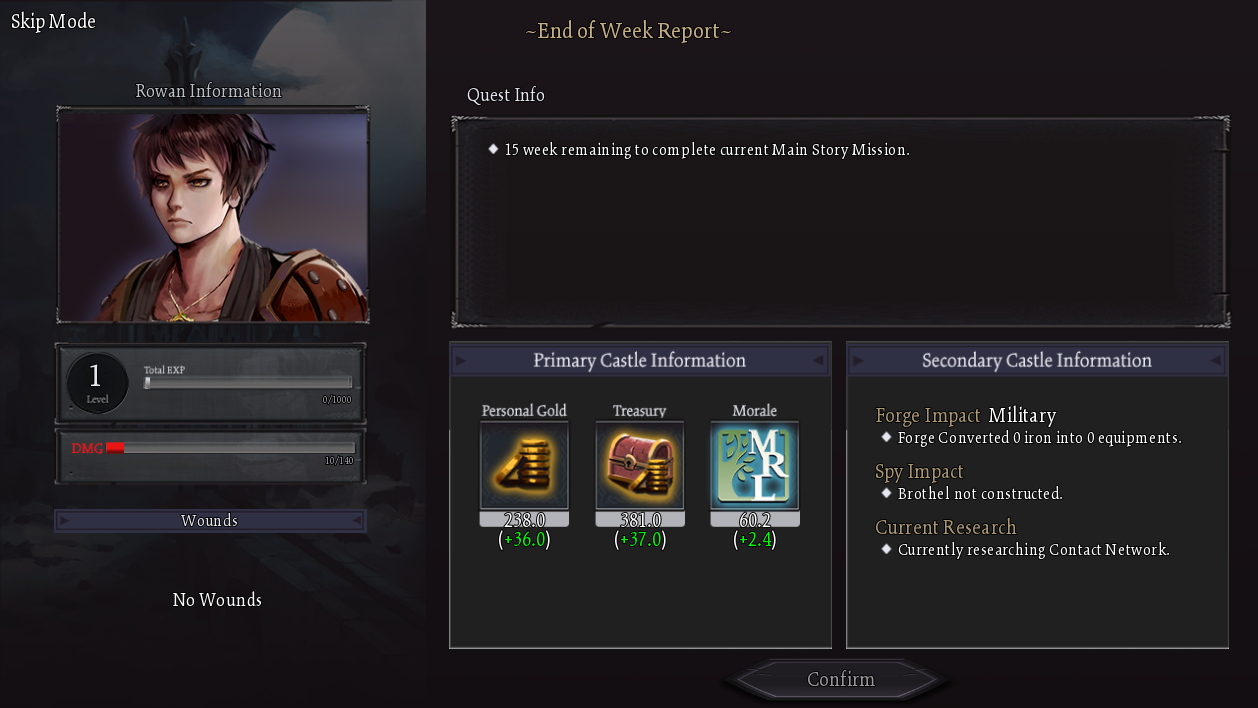 A number of quality of life improvements, including an all-new end of week report, which gives you all the important information in one place.

Now at the end of each week, you can see Rowan’s level, current damage level (tied to wounds), how long you have left to complete the main story mission, changes to castle management stats, and more.

This isn’t everything, but it should give you some idea of all the work that has been done since we launched last year. Moving on now, if you take a look at the roadmap, you can see what we have left before the current act is finished. The things highlighted with a glow are what are currently in progress.

I don’t want to go too into detail about the content side as it is pretty self-evident, but the main things we have left to do are the NPC arcs, and the Fae/Goblin narratives. All of them have been planned out in advance, and we’ll be working through each of them in turn in the near future.

In terms of art, Sommy has almost finished revising all the old CGs in the game in addition to his normal workload. When they are finished, he intends to revise the BGs done by our original artist, as well as animating more scenes.

With the huge changes to the mechanics in this update, we are almost done on that front. With expanded use for forge and spies, and the upcoming reintroduction of high-level buildings, the game is now being prepared for the culmination of all of Rowan’s effort in Rosaria – the expanded Astarte battle. Once this considerable undertaking is complete, no longer will Rowan be a passive observer of the events unfolding, but will take to the field himself, alongside every single orc, demon and drider recruited, fighting side by side whatever allies he managed to sway to his side, and making use of every blade crafted, and every piece of intel gathered.

And finally, in the Quality of Life section, we’ll continue to improve the UI, as well as adding a new tutorial to help ease players into the game and introduce them to all these new, exciting mechanics.

On the editing side, we’ll also be examining every scene in the game in order to give them a final polish; improving narration and dialogue, fixing any noted issues, improving visuals, adding effects and sounds, as well as new music. We’ve just commissioned our first new soundtrack piece, which I’ve already added and you will be able to hear on the title page.

So that’s it for today! I hope I’ve made you all excited about the changes we have made, and what is coming up in the near future. We are all working hard to make the best game we can, and I personally think Rein has done an excellent job with the mechanics update, and I hope you enjoy it.

Just one final bit of clarification: the mechanics update will be available in the new Steam release, but not the new content for the September release (it isn’t coded yet), backers will get this along with the new mechanics on the 26th, so keep an eye out near the end of the month!

1,018
Unlock 1,018 exclusive posts
Be part of the community
Connect via private message
Lord Arioch
is creating Seeds of Chaos
Become a patron