Skip navigation
Become a patron
Aug 11, 2018 at 9:25am
QE and Share Market Prices: A tale of two countries
The performance of the Australian stock market since the Global Financial Crisis (GFC) shows the difference between a country where Quantitative Easing—QE, the buying of bonds by the Central Bank to drive bond prices up and interest rates down, and thus encourage firms to invest and financial institutions to buy shares—was practised and one where it was not: Australia. It's both a warning about what could happen when The Fed starts to unwind QE, and a perverse opportunity to profit when Australia's central bank, the RBA (Reserve Bank of Australia) inevitably starts its own QE program.

Since Australia avoided the GFC, and its rate of economic growth has been twice as fast as the USA's after the crisis (an average 2.7% per year, versus 1.3% for the USA), you might expect Australia's stock market to have done better than America's. In fact, it's done much worse: the main Australian index, the ASX, still hasn't returned to its GFC peak, while the US's S&P500 has more than doubled its pre-crisis level, and it's almost four times as high as it was in the deepest depths of the crisis in 2009. 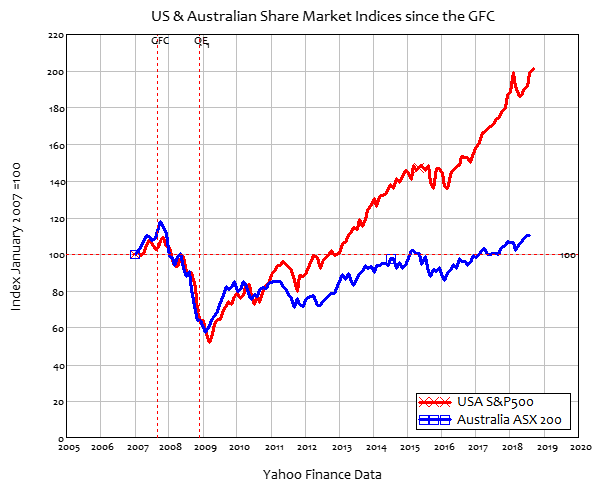 The timing of the US stock market recovery is instructive: it began in February 2009, just three months after the Federal Reserve began "QE1" (the first of three episodes of Quantitative Easing), when it promised to net buy bonds from the financial sector to the tune of $1 trillion per year ($80 billion per month).

With "The Fed" buying a trillion bucks worth of bonds every year, thus giving the financial sector one trillion of cash per year in place of its interest-earning bonds, the only place the financial sector could stash that dough in search of a return was… the stock market. This was the intention of the policy of course: to drive stock prices higher in order to stimulate the economy. Aside from the facts that it's made the wealthier even wealthier as a direct effect of government policy, and cost far more than a direct boost to the poor would have done, it's worked a treat: according to Robert Shiller's "Cyclically Adjusted Price to Earnings Ratio", it's driven America's stock market to its second-highest peak in history, higher than the 1929 bubble, second only to the DotCom peak in 2000, and more than twice its long-term average. 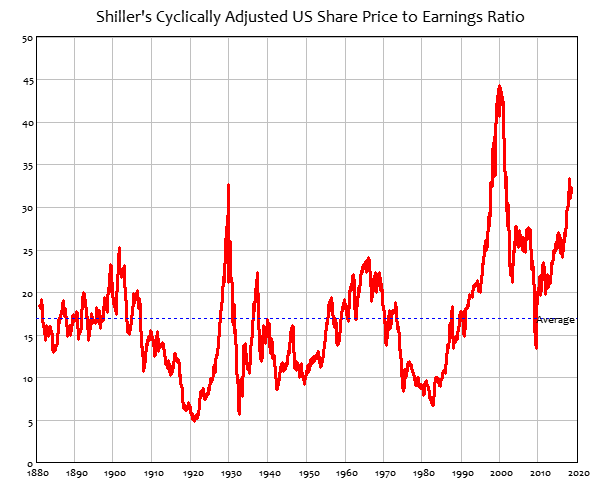 Now The Fed is planning to both unwind QE—to sell bonds back to the financial sector in return for cash—and to push interest rates up as economy booms, and the inflation rate finally kicks higher after a decade of low interest rates and QE.

That means that the Fed will be on the sell side for bonds, putting the finance sector on the buy side. To finance those purchases, the finance sector will have to sell shares. Interest rates will also rise doubly, firstly from The Fed pushing its policy rate higher, secondly from the unwinding of QE driving down bond prices and therefore driving up interest rates. Anyone's who's in the US stock market and not worried about what that triple whammy could do to share prices is delusional.

So what's a share market speculator to do? Well, when one casino turns bad, why not look for another one? The odds are that the next stock market casino in which the tables will be tilted by the House in favour of the Gambler will be Australia's.

Australia's RBA didn't have to rescue its economy from the crash, because prompt fiscal action by the Australian government (and re-starting the housing bubble by a bribe to entice First Home Buyers into the market) stopped the private sector deleveraging that caused the crisis everywhere else. So Australia's long boom since its last recession in 1990 was prolonged by continuing its private debt bubble. 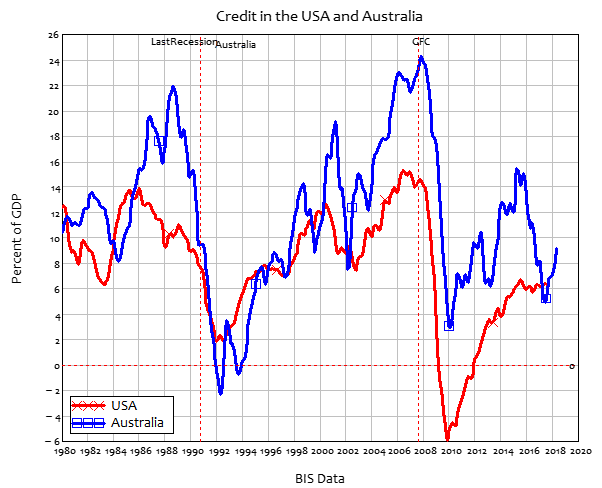 This isn't how the RBA interpreted Australia's success however, since its chieftains are as blissfully unaware of the importance of private debt to macroeconomics as was Ben Bernanke (and I know this from personal interactions with them at up to the Deputy Governor level). Instead, Australia's apparent success led it political and economic pundits to believe that the GFC was not in fact a global phenomenon, but a "North Atlantic Financial Crisis" due to how poorly financial systems were managed in the USA and UK, versus their excellent management in Australia.

Ha! Australia's smug confidence is evaporating now, courtesy of a Royal Commission into Banking which the private banks themselves actually called for, in the belief they'd get a squeaky-clean bill of health and be able to see off the naysayers like Denise Brailey, who were saying they were rotten to the core.

What an own-goal that turned out to be! The furphy that Australia's financial sector was both well managed and well behaved is being unravelled very brutally right now, as the Royal Commission exposes behaviour by the Australian financial sector that is every bit as putrid as that of their USA and UK counterparts before their crises.

I'll write much more on this soon, once I've finished some research funding applications and paper submissions with very pressing deadlines, but the real reason that Australia (and Canada) avoided the worst of the GFC is that they kept on drinking the Kool Aid that caused it: private debt, and especially household mortgage debt. Whereas the other Anglo-Saxon countries that had serious crises in 2007-08 (the USA, UK and Ireland) have reduced their household debt levels since then, Canada and Australia have continued to lever up—Australia to the spectacular level of over 120% of GDP. 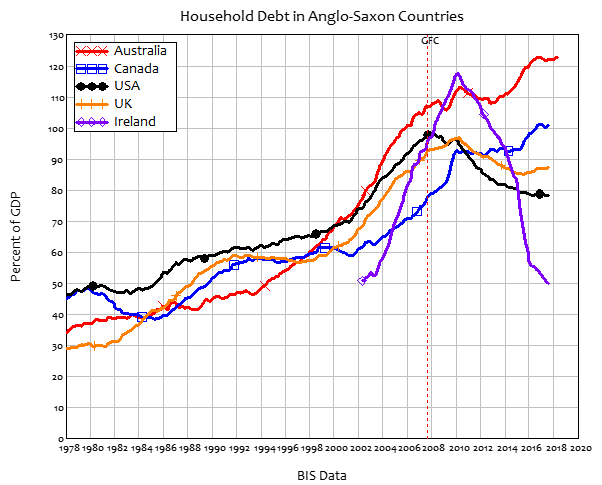 This additional leverage is what has kept the housing bubbles alive in both these countries well after they burst in the rest of the Anglo-Saxon world. We now know, from the hearings of the Australian Royal Commission, that this extra debt load for households in Australia has foundations of fraud, just as the Subprime Bubble did in the USA. As I've argued before, since houses are overwhelmingly purchased via mortgage debt, what drives house prices up is rising new mortgages. Equally, what drives them down is a falling level of new mortgages.

That relationship is starkly evident in the US data. As new mortgage debt rose to 2 percent of GDP every year, house price growth reached a maximum of 17% per year. Then when the Subprime Bubble burst—at almost precisely the same day that then Fed Chairman Alan Greenspan assured Congress that there wasn't a bubble by dismissing the record annual increase in prices as merely "signs of froth in some local markets"—the market plunged to a 17% fall in house prices in 2009. 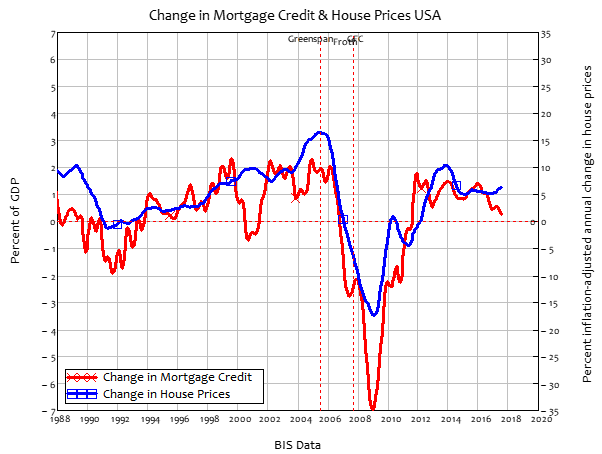 The causal mechanism in Australia has been the same—rising new mortgages causes rising house prices—but it's gone on for longer because government policies directly encouraged Australian households to take on more debt. First there was what I dubbed the "First Home Vendors Boost", when the Australian government doubled the grant it gave First Home Buyers as a palliative against the GFC. This encouraged First Home Buyers to rush into the market just as it was starting to tank in 2009. When this had run its course, and China's boom-time purchases of Australian coal and iron ore also came to an unexpected end, the RBA—which had put up interest rates to fight the inflation bogeyman—started to cut rates. This encouraged "investors" into the market just as it was starting to flag again in late 2010, By 2012 the Australian Housing Bubble was riding high once more. 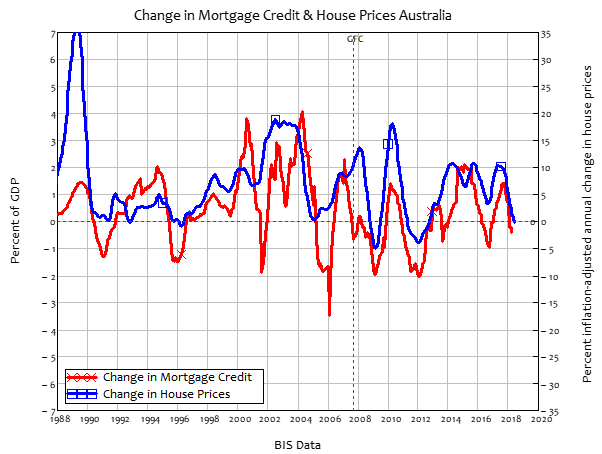 That is now so yesterday. Today, a perfect storm is hitting Australian house prices: mortgage growth has ceased and the change in new mortgages is now negative, dragging prices down with it; Chinese buyers have disappeared, as China cracks down on capital flight and Australian returns look lousy to Chinese gamblers anyway; hundreds of millions of dollars worth of "Interest only" loans (the Australian equivalent of the Subprime's NINJA "No Income No Jobs, no Assets" loans) are resetting into "Interest plus Principal" loans, increasing mortgage costs by up to 40%; and a flood of new apartments is coming onto the market, just as it has started to turn down. On top of all that, the Royal Commission is forcing banks to become the respectable citizens they always pretended to be but were not. The credit spigot has well and truly been turned off.

So Australia's evasion of the Global Financial Crisis will end. Credit-based demand will turn strongly negative, reducing aggregate demand and bringing Australia's world-record period without a recession to an end. When this happens, the RBA is likely to copy its US and UK brethren and indulge in Quantitative Easing as well—just as The Fed and the Bank of England are trying to unwind theirs.

Given what the GFC did to the UK and UK economies, and what QE then did in return, it's possible to sketch out a likely sequence of events for Australia:

So ironically, the Australian sharemarket could start to do well, just as its economy starts to do poorly. Such is the nature of stockmarkets when Central Banks start seeing keeping stock prices high as more important than keeping unemployment low.