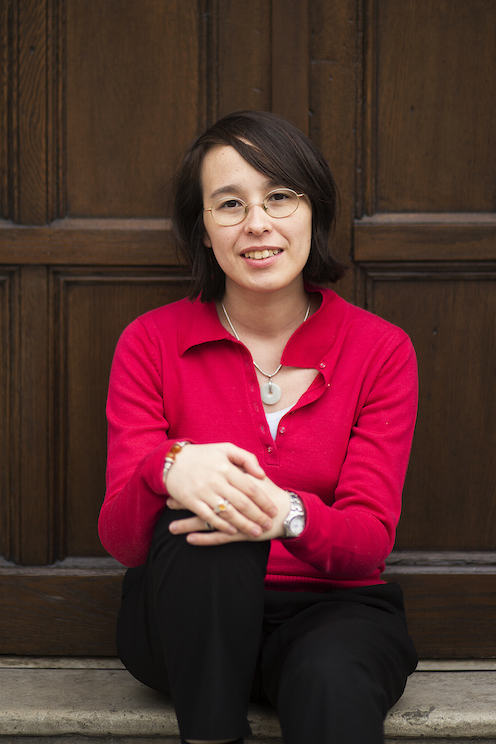 [Image Description: A photo of author Aliette de Bodard sitting on a stair while smiling at the camera. She is a French-Vietnamese woman with black hair in a bob and brown eyes framed by golden oval eyeglasses. Her hands are folded over her right knee. She is wearing a red, long-sleeved, collared jersey shirt with black slacks.]

Rachel Swirsky: What is the best part of living in Paris?

Aliette de Bodard: The bread. Or possibly the éclairs. I have a weakness for coffee éclairs, and they're just not the same abroad (I've tried!).

RS: What is the worst part of living in Paris?

ADB: We don't really have snowy winters, snow melts before it hits the ground. Wait. Maybe that's a positive.

RS: You do interesting combinations of fantasy and science fiction. What about genre mixing appeals to you?

ADB: It just happens I guess! I think of fantasy and science fiction as a large continuum of things, and I tend to pick and match the bits I like for a given project. I find it's very helpful for atmosphere, but there's also serious reasons: scientific rigour when world building a fantasy world helps a lot (even if there's a lot of overt or hidden magic with fuzzier rules), and projecting science beyond, say, the 50-year-mark is always going to lead to technologies that feel like they're breaking the current rules (aka seem like magic, as Clarke said).

RS: What is the tastiest part of living in Paris?

ADB: The Vietnamese grocery stores are only 40 minutes away (I live in the wrong area of town lol), which gives me the perfect excuse to grab a bowl of phở before going shopping.

RS: I kind of want to go back to Paris.

ADB: Everybody should! I grouch a bit, but I love the city. So many things to see (and so much food. I kind of always go back to the food).

RS: You've said your writing process when you were tackling "Immersion," my favorite of your short stories, evolved out of anger, and that was unusual for you. How was that writing process different from your normal one? Have you written out of anger again since?

ADB: The issue with anger is that I can't really sustain it for long (and that it takes a toll on me I'm not a big fan of). My writing process generally has its roots in curiosity: I have an idea and go research some more on details, and shape the plot that way.

I do get angry when researching stuff: for The House of Shattered Wings I had to research the Vietnamese diaspora in Paris, and there's quite a few hair-raising tales of people being conscripted into making weapons and being used as indentured labour for years after the war was over. But there's definitely no way I could write an entire novel fuelled on anger, it would be too painful.

RS: What is the most beautiful piece of art you've seen in Paris?

ADB: Uh, there's a lot of them around! It's a bit of a silly thing, but last time I was in Musée Cernuschi (the Asian Arts museum), there was this huge bronze statue of an (Asian) dragon leaping from the sea by the staircase. I'm not sure who made it or when it dates from, because there was no label on it, but it struck me as pretty amazing because the artist had captured the sense of flowing, arrested movement I associate with dragons.

RS: Can you describe what you call the Lovecraftian plants taking over your living room? Pictures more than welcome.

ADB: When we moved in, my in-laws gave my husband a cutting from a plant they had at home--it started as this really tiny handful of vines, and then it wouldn't stop growing! It's slowed down a bit today because we put it a little away from the light and decided not to water it quite as much (not being big fans of the plant invasion). At one point, when we moved out of our old flat, its roots had pierced the pot it was in and were busy trying to find some purchase on the parquet--it was a good idea to move the pot, or I fear we'd have had to tear the plant from its spot! 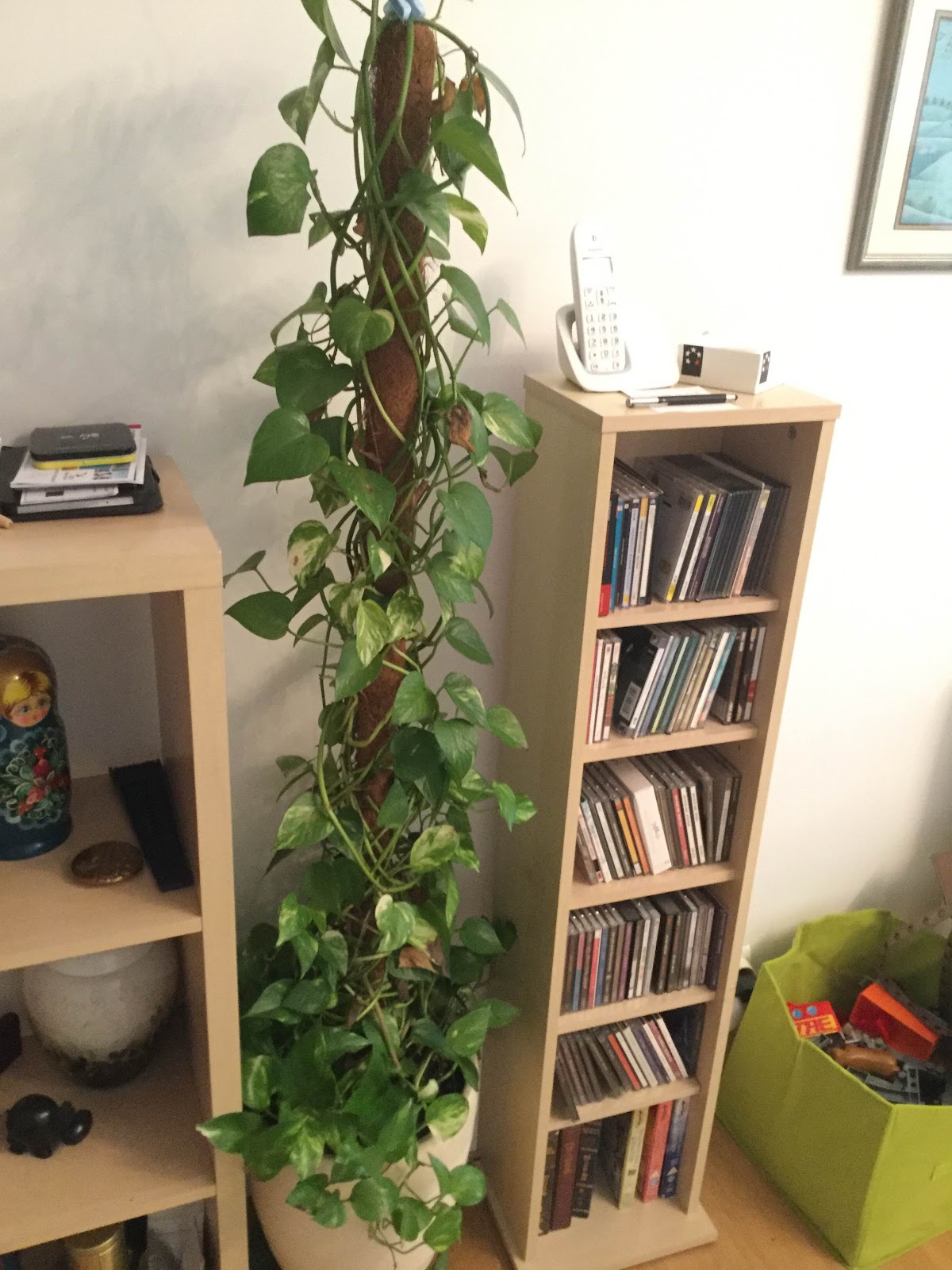 [Image Description: A white pot holds a tall green vine plant that wraps over and over again around a light brown pole.]

My colleagues gave me another one which is a kind of rubber tree, which also started as a tiny thing not much higher than my waist--over the summer it drank an entire bottle of water per day and made clusters of leaves every three days. It was double the size by the time I brought it home--same thing, we took it away from the windows and tried to water it a little less… 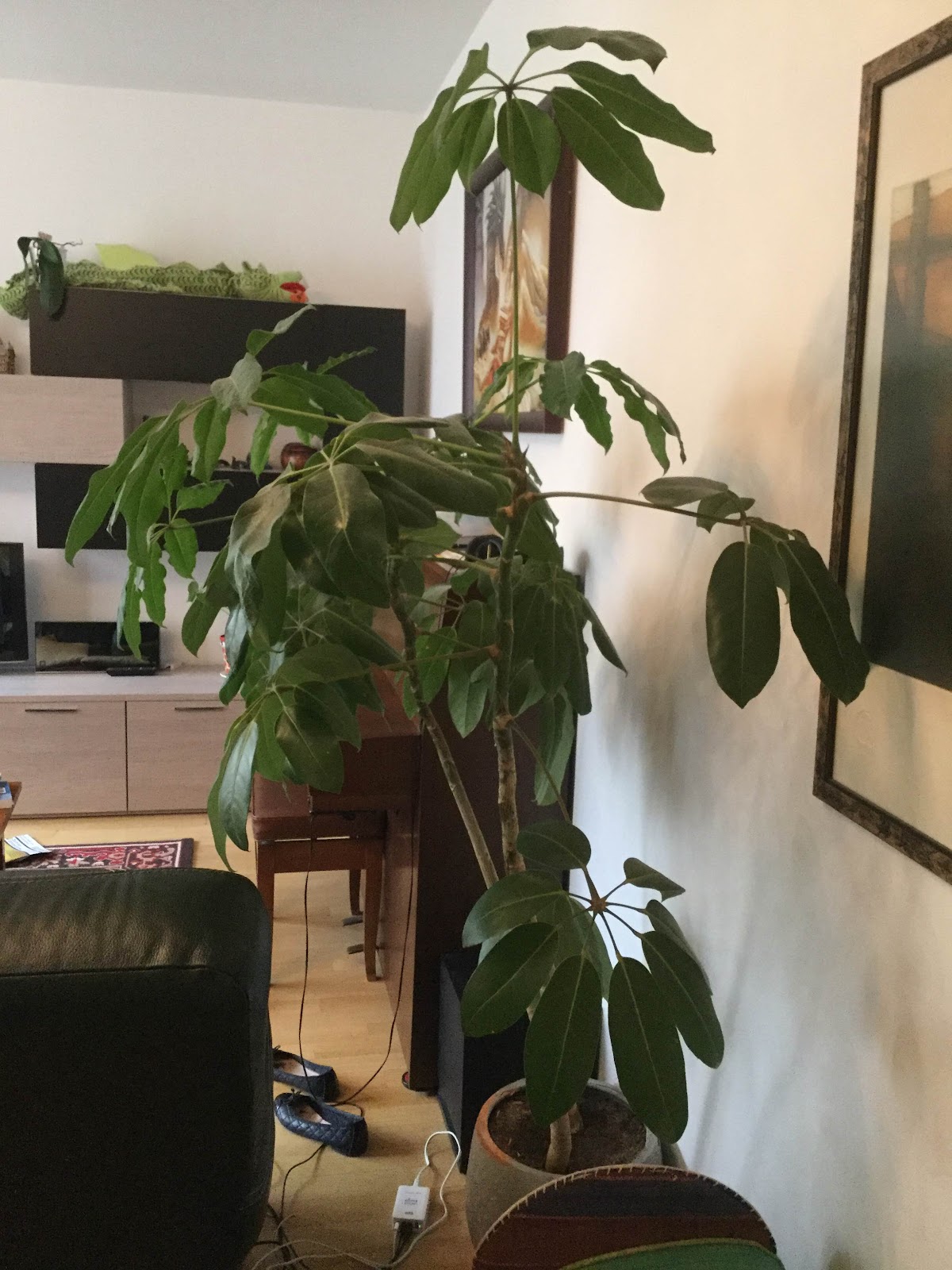 [Image Description: A tall rubber plant stands in a grey pot. It has two tan cylindrical trunks each with multiple clusters of verdant, draping, long and broad oval leaves. For scale, a TV entertainment center sits in the background. The tallest leaves branch higher than the large piece of furniture.]

RS: If you were forced to enter one of the worlds you've written about, which would you pick, and what would you do there?

ADB: Uh. Probably the Xuya universe because a lot of the others are very bleak! I'd be a builder of Minds for spaceships and space stations, I suspect--I'd quite like to be like Lady Oanh in On a Red Station, Drifting, fixing problems with Minds and making sure everything runs smoothly.

RS: Anything else? Take it away!

ADB: Phở. Everyone should try phở if they haven't already (ok ok, I'll grant that you can try bi cuốn if not phở. They're rice paper rolls with marinated pork rinds and fish mint, which is a herb with a very particular taste that I haven't seen much outside of Vietnam. There's very few ingredients in them total, but they taste *so* good).