Skip navigation
Become a patron
May 20, 2018 at 10:42 AM
Some Preliminary Questions for MMT
I had an impromptu debate with Warren Mosler, the founder and still one of the leading figures of "Modern Monetary Theory" recently. We disagreed on the role of trade deficits, and this has led another MMT luminary, Bill Mitchell, to write two commentaries critiquing my position (see "Trade and external finance mysteries – Part 1" and "Trade and finance mysteries – Part 2".

This is my partial reply to Mitchell—there are more issues that I want to take up when I have time to do so.

I'll open by noting that my disagreement with Warren was about elaborations of the core MMT position, rather than a dispute over that core (you might not necessarily think so from the disparaging tone of Mitchell's reply to me).

I agree with the fundamental accounting principle behind MMT. Since one entity's financial Asset is another's Liability, and the gap between Assets and Liabilities determines the net financial position ("Equity") of all entities, the net sum of all Equity is zero, as is the net sum of all "savings". If one sector of society wishes to save, then the remainder of society must dis-save by precisely the same amount.

The government is in a position to net dis-save on a permanent basis, because unlike any other institution in society, it "owns its own bank"—the Central Bank—and the liabilities this Bank issues are accepted as full payment for anything where its currency reigns. The Central Bank also does not have to maintain positive equity—its Assets minus its Liabilities can be negative—without it suffering any deleterious consequences. In contrast, a private bank that found itself in the same situation is, by definition, bankrupt: a private bank must have an excess of Assets over Liabilities in order to be able to operate legally.

There is also no difficulty for a government in financing this position, again because it "owns its own bank" which, though it is normally prevented by law from directly buying government bonds that notionally finance the excess of spending over taxation when the government "runs a deficit", it is quite at liberty to purchase some or all of those bonds from their private sector buyers—as with QE for example, where the Federal Reserve purchased $1 trillion worth of bonds per year off the financial sector for the better part of a decade. The taxes levied to pay for that were precisely zero, precisely because all the Central Bank has to do to buy anything, including bonds, from a private sector entity, is to make an entry in that private sector's account and say "I'll have that thanks". The increase in the Central Bank's liabilities (the money it puts in the private entity's account) is exactly matched by an increase in its Assets (the nominal value of the asset it has purchased off the private entity.

Financing the interest payments on this debt is also little more than an accounting exercise: there is no prospect of a government being unable to pay the interest bills on its debt if that debt is denominated in its own currency. Scares about the government being unable to service or repay its debts, when those debts are denominated in its own currency, are similar to Chicken Little's fear that the sky is falling.

In the same manner, MMT has taught us that the appearance—that the government is "living beyond its means" if it runs a deficit—is simply false. That's a significant contribution that MMT advocates have made to the economic debate.

That much is agreed: I may express the argument differently, but I don't think Mitchell or any other MMTer would disagree with the preceding argument.

The essential insight from this is that the government can increase demand in the economy and reduce unemployment by spending more than it taxes (there are feasible caveats to this that I won't go into here). The policy guidance this gives is that government spending should exceed taxes: it should "run a deficit" in the misleading parlance of mainstream commentary.

MMTers argue that it's beneficial to a country to run a trade deficit. In this reply to Mitchell, I'll restrict myself to just the first level of their argument: the proposition that Mitchell describes as "undeniable" that "exports are a cost and imports are a benefit". I'll quote Mitchell at length on the benefits to a nation that runs a trade deficit so that there's no chance of me paraphrasing his argument incorrectly (though the emphasis below is mine):

First, there was a denial that exports are a cost and imports are a benefit. That should be undeniable.

For an economy as a whole, imports represent a real benefit while exports are a real cost.

Exports mean that we have to give something real to foreigners that we could use ourselves – that is obviously an opportunity cost.

Imports represent foreigners giving us something real that they could use themselves but which we benefit from having. The opportunity cost is all theirs!

Thus, net imports means that a nation gets to enjoy a higher material living standard by consuming more goods and services than it produces for foreign consumption.

Further, even if a growing trade deficit is accompanied by currency depreciation, the real terms of trade are moving in favour of the trade deficit nation (its net imports are growing so that it is exporting relatively fewer goods relative to its imports).

German workers, for example, give up hours of labour time, and utilise all sorts of raw materials to make motor cars and motor cycles, which they then put on ships and send elsewhere for the enjoyment of others. That is a real cost to Germany because it could use those productive resources for themselves.

So, on balance, if we can persuade foreigners to send us more ships and airplanes filled with things for us, than we have to send them in return (net export deficit) then that has to be a net benefit to us in real terms.

How can we have a situation where foreigners are giving up more real things than they get from us (in a macroeconommic sense)?

The answer lies in the fact that our current account deficit '"finances' their desire to accumulate net financial claims denominated in $AUDs.

Think about that carefully. The standard conception is exactly the opposite – that the foreigners finance our profligate spending patterns.

In fact, our trade deficit allows them to accumulate these financial assets (claims on us).

We gain in real terms – more packed ships full coming in than leave – and they accumulate $AUDs, in the first instance…

I dispute the premise of this argument—the part that Mitchell said is "undeniable"—but for the sake of argument, I'm going to accept it here. So exports are a cost, imports are a benefit, and for its own good, a country should attempt to run a trade deficit.

MMT advocates take this as an argument in favour of attempting to achieve a trade deficit.

If this argument were correct—and when I have time later (much later), I'll argue that it is not—then I would take it instead as a reason to set up an international body and policy standards to stop economies deliberately running trade deficits.

That is not how MMT advocates like Mitchell put the argument. Instead they effectively recommend it as a policy that, presumably, all countries should adopt.

In my opinion, this goes against the spirit of the core MMT arguments with which I agree, because those core arguments can be practiced by all countries at once, to the collective benefit of the global economy: unemployment would be lower and output higher (leaving aside the caveats I noted above) if all governments ran deficits.

The same can't be done with trade deficits, because one country's deficit impose identical trade surpluses on all others. Since the deficit countries win from this behaviour and the surplus countries lose, this is anti-social behaviour which should be deliberately curtailed.

The fact that MMT advocates don't reach this conclusion from their premise is one reason that I have described MMT as being too USA-centric (though of course Mitchell is a fellow Australian). Given the fact that the USA dollar is the global reserve currency, it has a peculiar capacity to run a current account deficit because all countries need US dollars, not just to buy US goods, but to trade with each other as well. That necessarily over-values the US dollar (compared to what it would be if there were a purpose-built international currency like the Bancor, which Keynes recommended at Bretton Woods), which ipso facto is likely to mean that US exports are lower than they would be with a lower valued currency. Hence it is likely to run trade deficits.

And, on this MMT argument, it should be prevented from doing so because this means that the USA is being a parasite on the rest of the global economy.

But MMT advocates assert that the USA should run trade deficits, and also appear to claim that it's a good idea for everybody else too (Mitchell used Australia as his example). However, regardless of whether it's a good idea or not, it is impossible for all countries to follow this advice.

This is one of the key reasons I just don't get the MMT case: even it I accept its premises, thinking at the global level leads me to recommend that this practice be seriously curtailed rather than recommended.

As noted above, I dispute what Mitchell describes as "undeniable", that "exports are a cost and imports are a benefit". Explaining why will involve an elaborate dynamic argument, and I don't have time to develop that right now. But there is one implication of the pro-trade-deficits case that, to some degree, can be assessed by checking the data.

Leaving aside the global reserve currency country, which has special issues all of its own (you don't become the global reserve without being the world's biggest and probably richest country at the time; and being the reserve currency enables you to achieve financial outcomes that aren't available to other countries), if the pro-deficits case were correct, and deficit countries benefited from those deficits at the expense of trade surplus countries, then by and large, once you correct for complicating factors (special raw materials like oil; huge differences in initial development levels) the world's richest countries should be running trade deficits.

To test this, I downloaded Current Account Balance and GDP per capita data from the World Bank's World Development Indicators for the world's richest industrialized countries (maybe Australia and Canada are exceptions here as primarily raw materials exporters). It's presented in the table below, sorted by descending order of GDP per capita.

Does it support the "trade deficits are good" mantra? Not to my eye: the only country in the top eight that runs a trade deficit is the USA—the global reserve currency country. The rest run current account surpluses—and generally speaking, big ones. 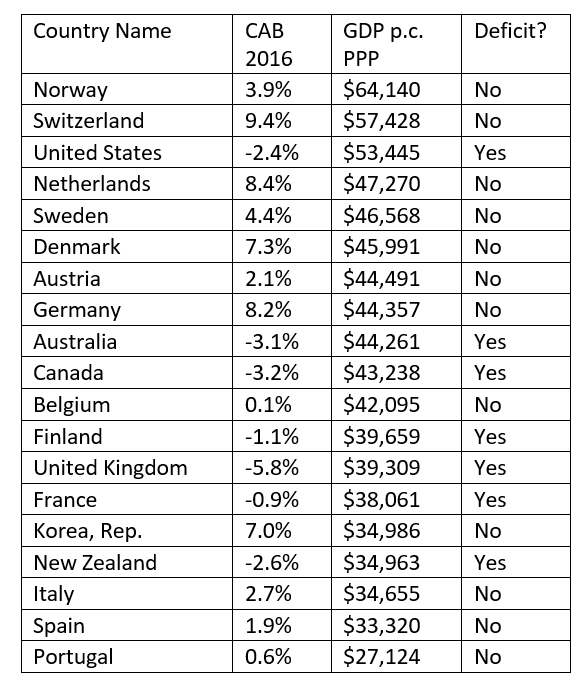 Anyone for Sectoral Balances?

The final implicit argument I'll make against the MMT attitude to trade deficits is the question of sectoral balances, which I thought was an MMT "thing"—and with which I agree of course. All three have to be considered to get the full picture (this image from the excellent The Minsky's Blog makes that point, and also drills down a little deeper) 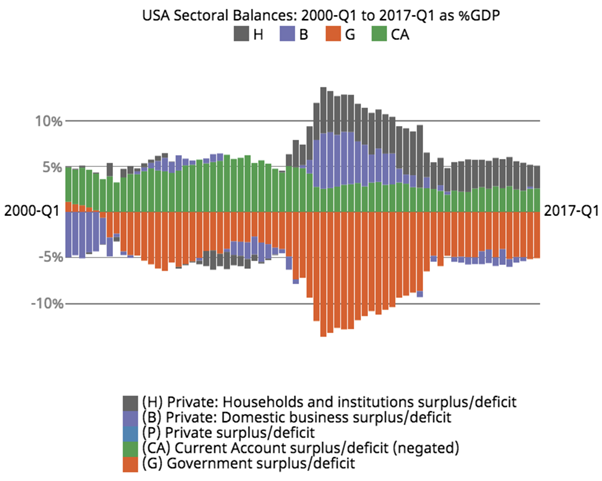 It's also a key issue in the best stock-flow consistent papers. To quote Wynne Godley, the father of stock-flow-consistent modelling in a paper he co-authored with Randall Wray:

When I have time to do a detailed reply on this issue, these are some of the factors I'll look at. I don't have time to do so now, and probably won't until well into 2019. But before I have time for that analytic reply, I'll continue to hold my negative attitude towards MMT arguments about the advantages of running a trade deficit, and the desirability of letting countries do so.