Skip navigation
We use cookies to improve your experience using this site. More information
Become a patron
Mar 1, 2019 at 10:34 PM
Voice Insider #28: Why Alexa and Google Assistant Will Spawn Thousands of Assistants

Think Tank - Why Alexa and Google Will Spawn Thousands of Assistants

Alexa and Google Assistant have created a new channel for reaching consumers. Yes, it is a channel because it is distinctive and mostly separate from other digital channels. There is starting to be some integration with mobile and email channels, but most of the engagements are entirely within a voice assistant enabled application. There are now over 60 million adult users in the U.S of smart speakers and twice as many on mobile. There are also tens of millions of users accessing voice assistants in Europe. Companies are making commitments to support Alexa and Google Assistant more because that is where the consumers are engaging than any specific enthusiasm about adopting a new marketing channel.

The the direct result of user adoption of Alexa and Google Assistant (or Baidu and Tmall Genie in China) is that brands are building voice apps that consumers can access through the popular assistants. That offers them presence and some brand control over the interaction. This is important because absence from this channel means consumers may get a distorted view of a brand or be funneled to a competitor.

However, the success of general purpose consumer voice assistants is also creating a significant indirect impact. Consumer behaviors and expectations are changing. Voice interactive capabilities may be a novelty today but they will increasingly be expected by consumers. That means app publishers need to start thinking about how they will voice enable their mobile apps, websites, and other consumer engagement points, even their physical products and spaces. In many cases, this will mean developing their own voice assistant based on a white label platform. It won’t always be practical to use one of the popular consumer voice assistants nor will many companies want to go down that path.

The Need for Control, or Not to Cede It

Beyond the consumer expectation and the need for voice, there is another sentiment becoming more prominent among enterprises around voice. They want control over the user experience and session data. Sometimes this is simply for their own purposes and in other instances it originates in a concern about the voice assistant providers as current or future competitors. If forays into Alexa and Google Assistant convince companies that voice is an important consumer engagement method for the future, they must quickly confront the question of how much control they are willing to cede to a third-party and which third-parties.

Large companies that have and would like to maintain direct consumer relationships while using voice and other conversational interaction will then logically begin building their own voice / virtual assistants. By building, I don’t mean generating their own speech recognition and natural language understanding models from scratch. Some may take that path for maximum control and flexibility. However, most will acquire a single white-label solution or stitch several third-party services together to launch their own assistant. This will lead to white label platforms that make it increasingly easy to configure and launch custom voice assistants. Not all of these customized assistants will survive, but the spawning of thousands of individual voice assistants is the logical outcome of a rapid consumer adoption of voice assistants.

Voice Insider Issue #25 introduced the GOWN framework which includes the concept of white label voice assistant platforms and identifies some example providers. While many of these technology providers look fretfully at Amazon, Apple, and Google, they should be cheering for the success of Alexa, Siri, and Assistant. The more successful those solutions are, the more quickly business will flow to the white label providers as companies look to incorporate voice in a way that maximizes their own control. This all hinges on consumer behaviors and expectations. And, Amazon, Apple, and Google have the biggest influence or creating new expectations and habits today. If they don’t succeed, the market won't’ disappear but it will be much, much smaller.

SYPDK - Amazon Prime Members 73% More Likely to Own a Smart Speaker Than an Average U.S. Adult

If you want to know who owns smart speakers, there is data that show some skewing by income and education. However, a big indicator is Amazon Prime Membership. A recent Voicebot consumer survey found that just over 26% of all U.S. adults owned a smart speaker compared to over 45% of Prime Members. Amazon is doing a good job of promoting Alexa within its core customer base.

More than two-thirds of marketers believe that voice ordering is an opportunity for brands and 43% say they strongly agree with the statement compared to just 15% that strongly disagree. There are still some open questions around how voice shopping / commerce will develop, but most people on the marketing side believe it is inevitable. With that said, few see it as a threat to their current business model. Hmmmm. Seems like I head that back in the 1990’s about the online shopping, but maybe I’m wrong and everyone knew the internet would be huge...before it was. Read more here. 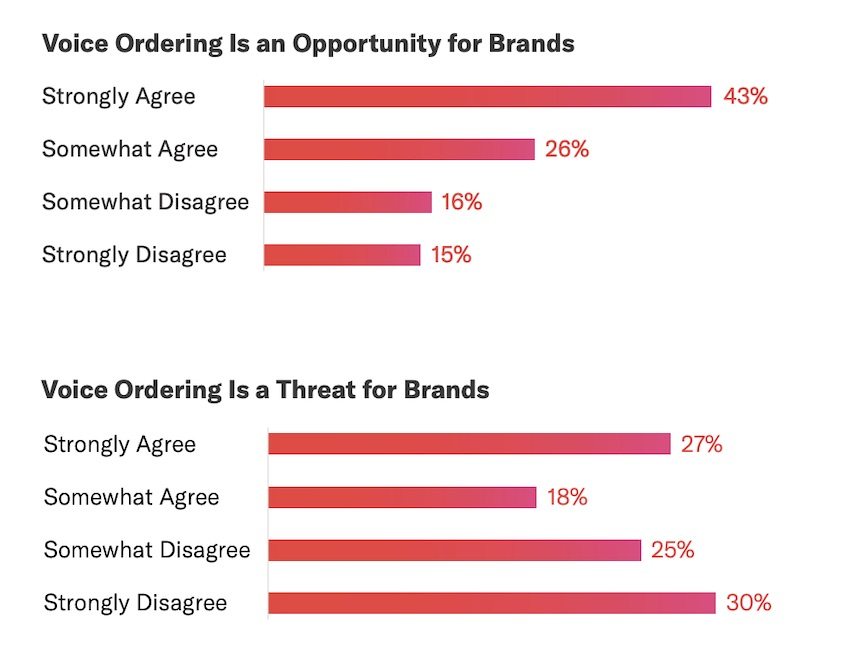