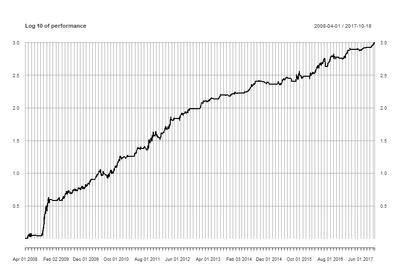 $50
per month
Join
This is the volatility strategy subscription, and so far, the only subscription option on this site.

Thank you for visiting. After gauging interest from my readership on my main site (www.quantstrattrader.wordpress.com), I created this as a subscription page for quantitative investment strategies, with the goal of having subscribers turn their cash into more cash, net of subscription fees (hopefully). The systems I develop come from a background of learning from experienced quantitative trading professionals, and senior researchers at large firms. The current system I initially published a prototype for several years back and watched it being tracked, before finally starting to deploy my own capital in 2017, and making the most recent modifications even more recently.

Seen another way, I hope this site serves as a reasonable venue for blog readers to help support my efforts in conducting more open-source quantitative finance research.

And while past performance doesn't guarantee future results and the past doesn't repeat itself, it often rhymes, so let's turn money into more money (hopefully).

Some FAQs about the strategy:

What is the subscription price for this strategy?

Currently, after gauging interest from readers and doing research based on other sites, the tentative pricing is $50/month. As this strategy builds a track record, that may be subject to change in the future, and notifications will be made in such an event.

What is the description of the strategy?

What is the strategy's edge?

In two words: risk management--that is, not blowing up. Essentially, there are a few separate criteria to select an investment, and the system spends a not-insignificant time with no exposure when some of these criteria contradict each other. Furthermore, the system uses disciplined methodologies in its construction in order to avoid unnecessary free parameters, and to keep the strategy as parsimonious as possible.

Do you trade your own capital with this strategy?

Absolutely. The information posted for subscribers are the trades I make. If there is a difference between the conservative and aggressive strategies, my position will be made explicitly clear.

Let me be clear here--I think that anyone that doesn't put their money where their mouth is SHOULD BE AVOIDED AT ALL COSTS.

I trade a fair bit of my own capital with this strategy, and have a larger allocation of capital allocated to another RIA in the vol trading space, so I put my money where my mouth is.

When was the in-sample training period for this system?

A site that no longer updates its blog (volatility made simple) once tracked a more rudimentary strategy that I wrote about several years ago (I **ENCOURAGE** every prospective subscriber to read it and know that I made improvements to it since here: http://volatilitymadesimple.com/quantstrat-traders-vxvvxmt-strategy/ and https://quantstrattrader.wordpress.com/2014/12/10/an-update-to-the-robustness-heuristic-and-a-variation-of-a-volatility-strategy/. I was particularly pleased with the results of that vetting, and recently have received input to improve my system to a much greater degree, as well as gained the confidence to invest live capital into it.

About how many trades per year does the system make?

In the backtest from April 20, 2008 through the end of 2016, the conservative system made 187 transactions in XIV (both buy and sell--XIV will be replaced going into March 2018), 160 in ZIV, and 52 (46 in the updated variant of the strategy as of Feb. 5, 2018) in VXX. Meaning over the course of approximately 9 years, there was on average 43 transactions per year. In some cases, this may simply be switching from XIV (to be replaced as of Feb. 5, 2018) to ZIV or vice versa. In other words, trades last approximately a week (some may be longer, some shorter).

When will my trades be posted?

As recent years have shown, sometimes, executing on open helps avoid huge news events (Trump tweets, ugh -_-...). To this end, my output will be posted *BEFORE* U.S. markets open on 9:30 AM EST. I myself have recently come up with a reasonable walk-forward algorithm that has shown to add value, and will also post not only my output, but when I execute as well.

How often is this system in the market?

Deprecated (as of Feb. 5, 2018)
For the conservative system, about 56%. However, over the course of backtesting (and live trading), only about 9% of months have zero return. The aggressive system is in the market a little more, at 62%.

What are the distribution of winning, losing, and zero return months?

Updated:
As of Feb. 5, 2018, with the system updated to be more conservative on VXX (changes that did not affect past subscriber performance), the statistics are as follows for the backtest:

What are some other statistics about the most  strategy?

So, after speaking with some industry experts, I was advised that I shouldn't tout such numbers in public (signal subscriptions are a grey area, and while I want to obviously do well by subscribers, putting performance numbers in public can have negative consequences). So, please feel free to email me at [email protected] with questions about the strategy, and I'll be happy to answer questions to the best of my ability privately.

Will the subscription price change in the future?

Unfortunately, Patreon does not allow me to change subscription tier pricing, so it has to remain at $50.

Can a modified strategy be provided for those who might not be able to tolerate a large drawdown?

Indeed there was one on Feb. 5, 2018. The strategy was deliberately out of the market in the days leading up that event. XIV blew up that day and was replaced with SVXY, which went to a 50% exposure. The backtest results are adjusted for that.

What are the strategy's risks?

Large single-day shocks. Such as those generated by Trump trade war tweets. Make no mistake--this is a *trend-following* strategy, because being on the other end of VXX is *usually* a fantastic trend (or *in* VXX during a time of a crisis). What hurts trend followers? Large shocks that cause large losses, set off the risk signals, and then revert. If you're remotely familiar with trend-following, this is a trend-following strategy, with all the pains that sideways markets bring.

And scaling in does nothing to solve that problem if the point of pain is the exit. 2018 was a challenging year. For me personally, it's that subscribers will unsubscribe in a time of underperformance. I assign them no blame--I didn't have the lunatic that is Donald Trump that makes markets go haphazardly sideways in my research. You could say I overfit to a no-Trump reality. Nonetheless, Donald Trump's shenanigans are far less painful than losing 95% in a few minutes that destroyed XIV on Feb. 5, 2018 in after-hours trading.

That said, critics *could* say that as most of my trading strategy was researched before Donald Trump campaigned for president, that I overfit to a reality in which an orange orangutan couldn't wildly swing the markets with random acts of buffoonery.

How complex is this strategy?

Not overly. It's only slightly more complex than a basic momentum strategy when counting free parameters, and can be explained in a couple of minutes.

Does this strategy use any complex machine learning methodologies?

No. The data requirements for such algorithms and the noise in the financial world make it very risky to apply these methodologies, and research as of yet did not bear fruit to justify incorporating them. I am of the opinion that daily data becomes stale too quickly to have a large enough data set to feed the very data-hungry machine learning models. If you have thousands of gigabytes of image recognition data, well, a car will still be that box on four wheels a hundred years from now like it was a hundred years ago. In contrast, new market regimes probably mean that using data from five years ago to train a machine learning model might not be the best idea. In fact, I even tried using machine learning for volatility trading as a project for a data science bootcamp I'm enrolled in. Results were...poor, to say the least.

Will instrument volume ever be a concern?

According to one individual who worked on the creation of the original VXX ETN, new shares of ETNs can be created by the issuer on demand. In short, the concern of volume is more of a concern of the reputability of the person making the request. In other words, it depends on how well the strategy does.

Can the strategy be held liable/accountable/responsible for a subscriber's loss/drawdown?

Let this serve as a disclaimer: by subscribing, you agree to waive any legal claim against the strategy, or its creator(s) in the event of drawdowns, losses, etc. The subscription is for viewing the output of a program, notably my trades, and this service does not actively manage subscribers' actual assets. Subscribers can choose to ignore the information posted at a moment's notice at their discretion. Again, this is not to be construed as official investment advice--and in fact--explicitly is not. It is purely for educational/informational purposes and should not be thought of  as--and in fact is not--official individual instruction to buy or sell. What is posted are the trades I personally take, and this page is filed under an education page. Again, educational purposes only. Full responsibility rests with individual subscribers for the outcomes of their trades.

Why should information be trusted by subscribers?

Because my work on other topics has been on full, public display for quite a few years. Unlike other websites, I have shown "bad backtests", thus breaking the adage of "you'll never see a bad backtest". I have shown thoroughness in my research, and the same thoroughness has been applied towards this system as well. Until there is a longer track record such that the system can stand on its own, the trust in the system is the trust in the system's creator.

Who is the intended audience for this information?

The intended audience is individual investors with a certain risk tolerance, and is priced accordingly.

From an absolute perspective? Without a shadow of a doubt, yes. This is not a strategy that will get you a calm 7% per year with a drawdown of 12%. While I try to limit drawdowns, 2018-2019 were a challenging period due to choppy markets and tested historical drawdown limits for my own system. That said, adjustments have been made to the system to minimize such events in the future.

Is there a possibility for collaborating with other strategy creators?

Feel free to contact me at my email [email protected] to discuss that possibility. I request a daily stream of returns before starting any discussion.