SCAPULA COMICS is creating content you must be 18+ to view. Are you 18 years of age or older?

is creating Comic Books and Monster Mags for Creepy Kids and Freaky Fans!

$5
per month
Join
Complete access to the patrons-only feed, plus bonus prints, stickers, and an exclusive Scapula enamel pin with any order from the Scapula Store .

$10
per month
Join
Join the Halloween Gang: See yourself caricatured as a member of Scapula’s punk soldiers! [caricature is drawn after one month of pledge] 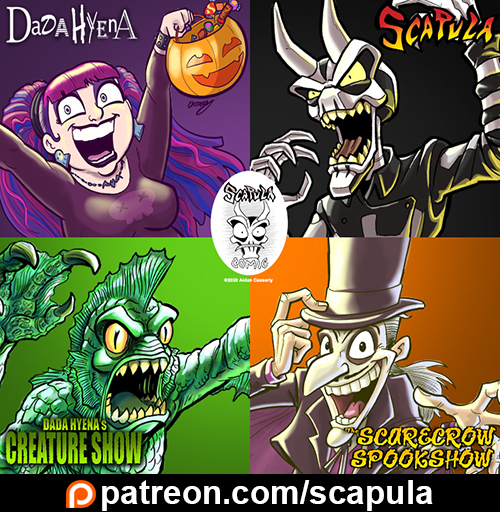 Your fiendish friend Aidan is back! By day I’m a freelance illustrator and storyboard artist, working on client/studio jobs that pay the bills and keep the big bad landlord away. When I’m not working for others, however, I’m working for myself creating my own comics and other fun artistic adventures. Read on, my friends, to see what’s happening on the ol’ drawing board. SCAPULA
He's the World's Worst Villain....the 'worst' in every way! A frustrated grouch in a spooky skeleton costume, Scapula fights an ongoing battle to prove his worth as a supervillain. To do that he'll have to stake his claim in the underworld, competing with crazed creeps, monsters, gangsters, and other sick minds. The worst has only just begun!

Scapula is my major creator-owned comic series; first self-published in 2007, the adventures have continued on in web and print comics for over a decade and counting. Thanks to the ongoing support of Patrons I was able to create the special tenth-year anniversary issue, Scapula and the Sinister Monster Doom Legion! The book was successfully crowdfunded and printed, all thanks to your support and generosity. Less than two years later we were able to succeed again with Scapula: Doubly Dark & Deadly! More stories are in the works, and you'll see the progress as it goes! 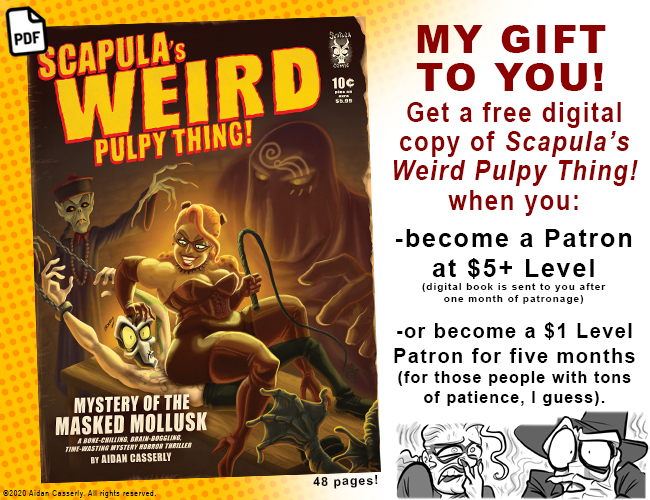 In 2020 I released the first ever Patreon-exclusive Scapula story, titled Scapula's Weird Pulpy Thing!, that posted new chapters every Sunday. All Patrons who pledge at $5+ Level will receive a free PDF digital book collecting the entire story! 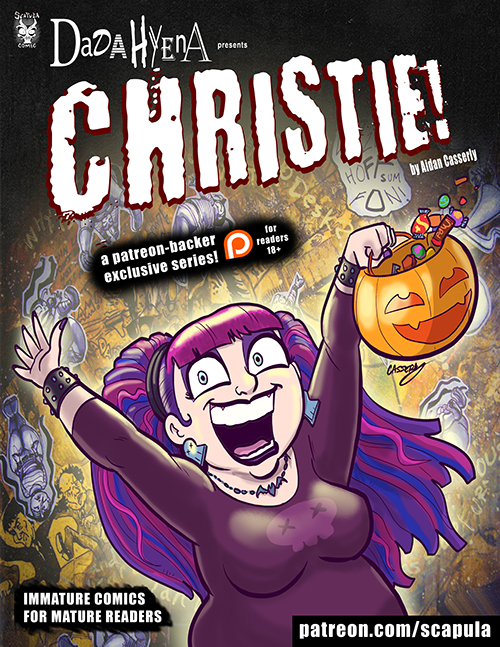 Christie McGoff was the star of my first webcomic, Dada Hyena; she’s returned in another run of comics made exclusively for my Patreon backers! The new series focuses on the misadventures of the cheery, cheeky, gothy girl and whatever strange things come her way.

(For those of you wondering why this Patreon page has been labeled for mature readers only, it's because of a patron-exclusive story ‘Too Old to Care‘, which had the dubious honor of getting this page permanently slapped with an “18+” warning. C'est la vie.)
For those of you who can handle a little cheesecake and a LOT of surrealism, humor, and weirdness, your friend Christie is waiting for you to join her in the fun! As an extra treat, Dada Hyena's Creature Show patrons can vote on which characters they want to see in the every upcoming drawing video! Patrons-only polls are held where backers can help choose which creepy character or movie monster they want to see me draw...and YOU can join in on the fun! 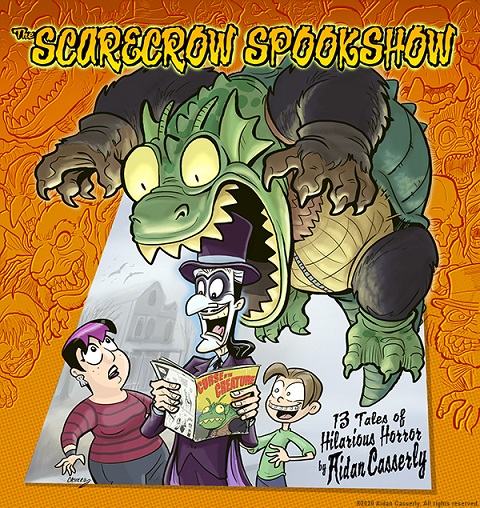 The SCARECROW SPOOKSHOW
Retired horror-movie host Barron DeMonte lives in a world of silver-screen shocks that have been his act-in-trade for decades. Can he readjust to a semi-normal life, raising his two grandkids while dealing with the monsters, ghosts, and other terrors that invade his quiet neighborhood?

As a child I loved newspaper comic strips, beginning a lifelong dream to join my artistic heroes on the beloved Sunday pages. With the gradual demise of newspapers I decided instead to release my intended comic strip, The Scarecrow Spookshow, as part of D.C. Comic’s Zuda competition in 2009…where it met with an astounding thud among very vocal critics.

Out of all of my personal projects The Scarecrow Spookshow had the most difficult history, which is why I was determined to give it the chance it deserves to become something great. After nearly a decade of silence I returned to the series and created a graphic novel for children and young adult readers. This family-friendly collection of imaginative short stories will be enjoyed by readers both young and old, human and otherwise, and my Patrons's support and encouragement made it possible.


PATREON BACKER PERKS
For your support I am offering a lot of great rewards and general amusement:

Previews and Behind-the-Scenes Peeks
See work-in-progress screenshots and sketches of new comics as they are made, along with videos of the art-making process.

Drawing Requests
Every month I will draw something new based on suggestions from Patreon backers of any level, no matter how utterly ridiculous it may be (any offensive material will be censored, though). Let’s hear some REALLY crazy ideas from your mad mind!

Vote for your Monsters!
Before every new Dada Hyena's Creature Show video patrons will be able to vote from a list of options for which character I'll draw and discuss, or even suggest one of their own.

Figure Drawings
Again, for you visitors wondering why this Patreon page is labeled 18+ it's because of the evil sin of drawing the human body; I think it goes without saying these are all artfully done and not lewd in the least, but this site wants you to be unoffended so that's how it goes. All figure drawings are locked patron-exclusive posts.

Critiques for young bright-tailed bushy-eyed artists
Are you an artist or student looking for a critique or just some professional advice? I will be offering feedback and, for the higher level-backers, a tutorial session for a piece you are working on; my notes can either be sent to you privately or posted here for others to learn from.


PLEDGE LEVELS
Pledge nothing: Part of the Patreon feed will be available for everyone. If you like it, consider tossing in a buck to see more!

Pledge $5 per month: Complete access to the patrons-only feed, plus exclusive bonus prints and other surprise goodies with any order from the Scapula Store (or have these goods sent to you for only the cost of S&H). You will also receive a free digital copy of Scapula's Weird Pulpy Thing! (48 pages).

Pledge $10 per month - Join the Halloween Gang: See yourself caricatured as a member of Scapula’s punk soldiers! [caricature is drawn after one month of pledge]

Pledge $15 per month - Join Dadaman’s Not-a-Real Art School: Get a personal critique for an art/comic piece you are working on; you will receive my write-up (notes and/or sketches), either privately or posted in the Patreon-feed for other artists to learn from. [first critique is available after one month of pledge] [caricature is drawn after one month of pledge]

With your support, we can keep the comics coming, my friends. Thank you all and enjoy the show!