Sentenced To Life Podcast is creating content you must be 18+ to view. Are you 18 years of age or older?

is creating a podcast about mental health 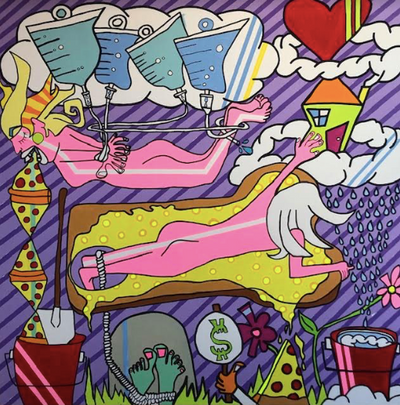 The mission of this podcast is to break stigma on suicide, trauma and mental illness while providing clinical education. Your contribution will help us meet production and personnel expenses to continue producing this podcast.

Dr. Jason LaHood and Kendall Alaimo are both experts in the field of complex trauma through intimate lived experience, academic research and clinical knowledge of applied modalities for trauma. Even as experts with rich clinical knowledge their PTSD symptoms this summer had flared and were not dissipating. Technically and truthfully, Jason and Kendall could have lost their lives to suicide this summer. As a last ditch effort to save their own lives they found ketamine and then after that each other through their serendipitous meeting at a local ketamine clinic that “sentenced them to life.” Two strangers that had one story. The story of many: healing from child sexual abuse.

Jason's dream was to have a mental health podcast and Kendall’s was to find a way to to use her voice on a larger scale while continuing on in her advocacy. Thus the Sentenced to Life Podcast was born.

This sometimes comedic podcast takes a unique perspective on all things mental health through interviews with clinical experts, Ted Talkers, film makers, artist, activist, trauma survivors and everyday folks who just wake up on the wrong side of the head.
On May 13th, Sentenced to Life Podcast aired their first four episodes which allow the audience to get to know Jason and Kendall more intimately as they start to illustrate the complex trauma they personally endured, what ketamine is and how it saved their lives this summer.

To listen all of our previous episodes, visit our website: http://www.sentencedtolifepodcast.com

Dr. Jason LaHood is a Clinical Psychologist with a sometimes nicely groomed faux hawk. When he isn’t eating Jimmy John’s sandwiches, speeding through Downtown Chicago on his Vespa, or tripping off of Ketamine, he conducts research in the area of suicide. He has an office view that surpasses most penthouse suites. He is treating trauma survivors that have been “sentenced to life.”

“This is my calling. I’ve searched my whole life to make sense of my suffering.” - Dr. Jason LaHood

Kendall Alaimo is a survivor of child sexual abuse and trafficking. She is an international Activist, an Artist and a Life Coach who finds humor in being “sentenced to life.” When she isn’t screaming through her mental health megaphone, throwing down paint on canvas, riding the subway with her unbathed service dog Winston or speed dating in the express line at Trader Joe’s, she is using her voice as a catalyst for innovating clinical care for PTSD.

“My Voice survived the turbulent flight of my life and I am using it on this podcast to tell the stories of many.” - Kendall Alaimo

Around here at the Sentenced to Life podcast we like to refer to our producer, Steve Robinson, as “The Head Cheese.” Steve started his professional career in 1967 at WBUR/Boston while he was majoring in music at Boston University and has produced hundreds of classical, Jazz and public affairs programs and managed radio stations across the U. S. From 2000 to 2016 he was the general manager of Chicago-based classical station WFMT and the WFMT Radio Network. In his tenure as WFMT’s Head Cheese, Steve created many new programs that were heard in Chicago, around the U.S. and the world, pioneered a cross-cultural radio exchange between the U.S. and China, and nearly doubled the stations net income. At WFMT he won over 20 awards for his work but he’s eagerly awaiting news about receipt of the Mental Health Megaphone Award which is the one award that has eluded him so far.

Steve is the founder and president of New Media Productions, a company he created in 2016 that is devoted to all things podcasting. As Head Cheese it will come as no surprise that his favorite dessert is cheesecake but as he’s on an intense weight loss diet, he can now only eat the cheese…but not the cake.

“I have produced radio shows around the USA and internationally for decades. I have never listened to a program as powerful and impactful as this one.” - Steve Robinson

If you join the $100 tier you will get this color print of Kendall's painting Titled Death by Grilled Cheese sent to you in the mail.

The original painting is also available for purchase at $7000. Reach out to us at the address below to purchase.

Kendall is a graduate of The School of the Art Institute of Chicago. She believes art can be used as a powerful catalyst for conceptualizing, processing and healing complex trauma. She creates artwork about her own trauma with hopes to create dialog about the prevention of sex crimes against children. This is an original acrylic painting that measures 60 X 60 inches. Its titled Death by Grilled cheese and is inspired by one of Kendall's first Ketamine trips. In episode four of the Sentenced to Life Podcast she states, "Floating on an open faced grilled cheese sandwich saved my life man." This $7,000 donation includes the cost of domestic shipping.