SFM-DH is creating content you must be 18+ to view. Are you 18 years of age or older? 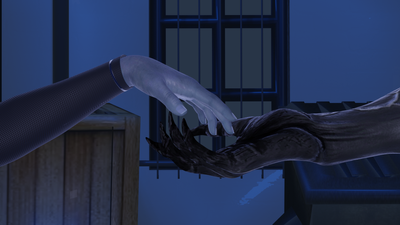 $1
per month
Join
For those who simply love visiting the girls! Access to Patreon feed and all it entails, with Patreon-only extra animations of alternative scene angles, high quality version downloads, polls whenever those arrive, and so on. 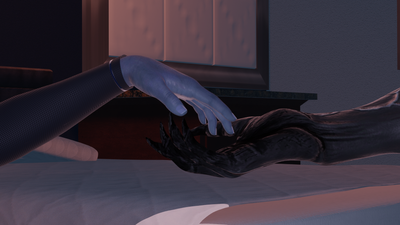 $5
per month
Join
For those who keep coming back for more! All previous rewards as in the $1 tier, as well as access to the official Discord server where early concept stage works are dumped, and you can prod SFM-DH all you want about when the heck the next big project is about to land. Word of Warning: Subject to irregular updates.
Includes Discord benefits

DISCLAIMER: I do not presume nor claim to own any of the characters or other copyrighted material featured in my work. All material I utilize in my work, under fair use, belong to their respective copyright owners.

Hello there, what do you do?

I am creating smutty animations/wallpapers/short videos that could be considered rather niche; focused almost exclusively on somewhat exaggerated proportions, accompanied by small story snippets to ground the content in the established lore of whatever universe I tackle at that time. I primarily work in Source Filmmaker, particularly for my more ambitious projects, but I'm also slowly learning how to use Blender and looking into its equivalents. By backing me you can expect content where a lot of dirty men, aliens and other scum being enjoyed by lovely ladies, set in game and movie universes ranging from sci-fi, to fantasy, to anime. Aside from the niche focus, my material tends to be rather "vanilla" in terms of its content, and apparently is rather unique in that it features no futa at all, and never will. This is, in short, a futa-free zone.

What have you done previously, then?

Since the tumblr exodus my old posts have been mostly lost to the ether, but my new things are available over on twitter by @SfmDh, while my more elaborate work, with sound and such, can be viewed specifically over at naughtymachinima under the username "Dreamhawk". For fear of another suspension, I will not link directly to any of this here, Patreon's stance on NSFW content considered. Though none of my content is TOS breaking, we play it safe, and we play by the rules here, folks.

What do I get for supporting?

My specific goal for this patreon is, at the very least, two updates per week, with an animated "Monday Loop" and a Friday "Progress Report" on my larger projects. In between these, I try to squeeze in a Wallpaper Wednesday, which ranges from elaborate scenes with multiple characters to simple pinup pieces, but it's very dependent on time. Should I fail to meet any of these targets at any point for whatever reason, I always make clear why through a line of communication with my backers - so you will never be left in the dark. Fundamentally, this patreon is for those curious about my work, see what I've got in the works, and who want to experience my work at its highest quality.

As listed under the supporter tier, content you can expect by backing consists mainly of access to extra material pertaining to otherwise publicly available work of mine, such as extra camera angles in the form of alternative renders of completed scenes, High Quality version download links to all animations, HQ versions of wallpapers, experimental scenes that aren't quite fit for public release, and sneak-peeks at larger projects, not to mention character and scene polls whenever those arise; both to tell me what to focus on finishing and what to create in the future. Note that while I certainly like listening to the community's wishes, I will inevitably pursue what is the most appealing to me as a creator.

What's up with the support tiers?

I've deemed my ability to deliver on the more ambitious tiers that certain, other creators have as something that I'm less likely to be able to pull off, courtesy of time constraints due to working a full-time job and social commitments. As such, the main point of this page is the simple $1 tier where people are free to support my work with whatever amount they deem they can afford or they are willing to spend, and everyone will gain access to the same content posted here on Patreon. Major video projects are, additionally, always released publicly.

The $5 tier is specifically for those wanting to squeeze a little bit extra content out of me, particularly if they're already supporting me with more money than the $1 one, or by all means, just think I'm worth those extra dollars. The main draw there is Discord access with extra tidbits in the form of being able to check my Work In Progress and Project WIP channels for concept pieces that aren't in a state where they're worthy of their own posts here on Patreon, straw-poll access for scene details whenever those are in question, as well as being able to speak to me directly as a creator. This tier suffers from irregular updates and is heavily dependent on my real life schedule, just as a word of warning.  As an additional clarification of what to expect: this is not a "busy community" kind of discord - rather, the vast majority simply utilize it as a channel to see more of my work, occasionally ask me questions or give me suggestions, and otherwise lurk in silence, which they are perfectly welcome to do! Less mod work for me :)

In the future, it might be possible that I will open up more tiers if I can find appropriate rewards for them, and if I find the time for it all.

Should my support grow to the point where I can shave work hours, I'll certainly add more rewards for you, and perhaps more intricate tiers with corresponding rewards in the future. But for now, we're all just here to enjoy the ride.

Thanks for reading, and thank you so much for supporting my work!

61% complete
Taxation and everything in mind, this would mean this Patreon fully takes the place of my day job, opening up for a very steady content drip for those who support me and will potentially make me consider streaming my process.
5 of 5