Clockwork Throne is creating content you must be 18+ to view. Are you 18 years of age or older?

is creating a massively multiplayer vampire game with mature content

$1
per month
Join
or save 10% if you pay annually
Supporter! We really appreciate you backing us! You’ll get our heartfelt thanks for spreading the world, and access to any general Patron-only content and news!

$5
per month
Join
or save 10% if you pay annually
Backers at this level who have pledged with the last 30 days gain the Mature Content Pass (MCP) for Shadow's Kiss.  As long as you have a lifetime contribution of $10 or greater, you can log in with the MCP and experience optional quest lines and special content such as seducing NPCs and having intimate relations with key story characters.

$10
per month
Join
or save 10% if you pay annually
We celebrate you as an important backer of Shadow's Kiss!  If it's your first month pledging, it also unlocks access to the game, allowing you to download the patcher and jump into the Alpha!  It also includes the Mature Content Pass, so you have access to exclusive content and questlines.

NOTE!!  Shadow's Kiss servers are down until our soft launch on Steam in a few months.  Pledging here will still get you access to the game when it releases, but you will not be able to play it until then.

Enter the world of SHADOW’S KISS, an online RPG where you play a vampire bent on dominating mortals and ruling the night!

We’re creating mature, seductive, and sensual content for the SHADOW’S KISS Vampire MMO, which is currently in Alpha.

Shadow’s Kiss is a passion project for Clockwork Throne Studios, and is now in its third year of development. It has a wide range of systems already online, including quests, combat, NPC interactions, and an intro tutorial. This Patreon is where we’re looking for additional support from the community, which is particularly important for a small team trying to bring this vision to life. Support us here and you’ll receive a pass to experience the mature content in Shadow’s Kiss! We’re ready to embellish and explore that aspect of the game and its story, and the incredible community on Patreon is what makes that possible.

Shadow’s Kiss is a world you can conquer and a story you can explore.

The game focuses on classical role-playing (RPG) gameplay, using it to delve into mature themes and content—from the grotesque to the thought-provoking—while never losing track of entertaining you.

Shadow’s Kiss draws its inspirations from the horror, dark fantasy, paranormal, crime fiction, folklore, mythology and adventure tales that underlie so much of pop culture today. It may have tones and touches of True Blood, Lost Boys, the Buffyverse, the Vampire Chronicles, Near Dark and countless other influences, but in the end Shadow’s Kiss is its own thing: A unique creation flavored with both the familiar and the exotic.

We could tell you about the ways our Vampires are different, or how they interact with strange supernatural factions such as the demonic Djinni and their thousand and one bargains—

—or even their dealings with the Weird Science of the Necromancers, a lunatic legion bent on destroying the boundary between life and death.

But all that will unfold for you in play, and the play’s the thing!

Your character exists in a society and world that are fully developed, but not smothering. There is structure—but there is also room for your Vampire’s satisfactory advancement. We’re proud of our world and we love our “story so far,” but the world is for playing in and the story really begins with you!

We're fans and creative people, and we’re also game developers who've been doing this for a long time. We’re excited to build on the elements that make shows like Game of Thrones, The Walking Dead and Gotham particularly engaging: Ideas that fire your imagination, worldbuilding that doesn’t disappoint and a vast stage for you to stride across in search of your own fortunes. Mature content is part of the fabric of Shadow’s Kiss, and now it will come to life even more vividly.

If you’re ready to learn more about our game design and see screenshots of what we’ve accomplished so far, visit us at

Meet the Architects and Artisans:
A game industry veteran with experience in programming, design and production, Dreadflame has long flirted with becoming a creature of the night, going all the way back to vampire LARP in the ‘90s. His love of cosplay and things gothic is matched by his passion for collaborative and competitive online RPGs.


TheVoice is a professional writer with broad-ranging experience in fiction and non-fiction, across multiple print, digital, visual and interactive media. He has also been a gaming storyteller, with particular interest in vampires and other monsters, for many years.


Ripper3 is a veteran character modeler and animator, and a 3D artist of the first order. He’s the first line of defense in creating the custom models and monsters for Shadow’s Kiss.

Monsoonexe is the primary designer on Shadow's Kiss: building quests, encounters, dialogues, and the spooky things that go bump in the night. When not getting jumped by Slayers in San Cipriano, he enjoys tabletop gaming, coke, hookers, pony rides into the sunset, and the craps table at Circus Circus. Thought the dress was blue.

We're incredibly grateful, both for your support and for the opportunity to get your input as we forge this world. 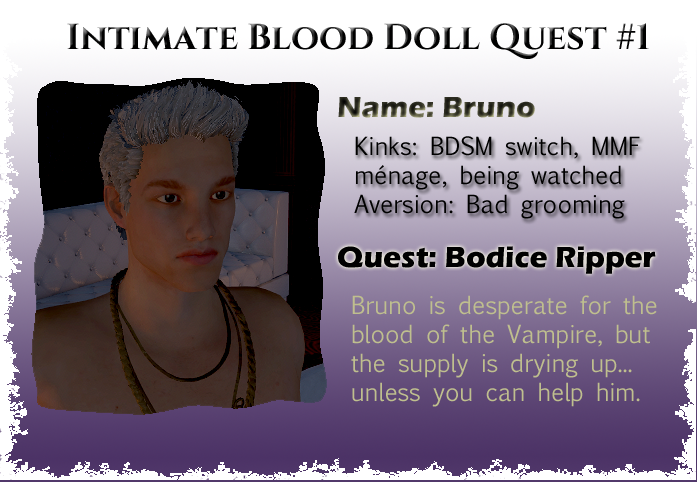 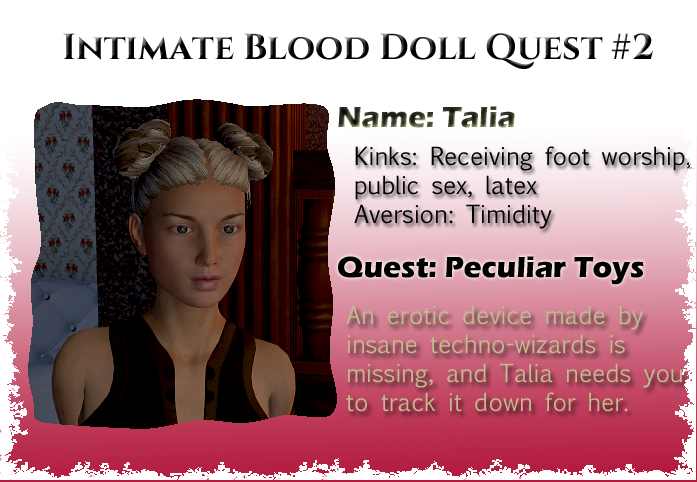 Our culture has become more accepting of mature themes, from shows like True Blood to Game of Thrones, to games like God of War and Grand Theft Auto, which include diverse lifestyles and sensuality. Shadow’s Kiss delves into seduction and horror to punctuate the adventure, darkness, and romance of the Undead.