Hi, I'm Eniko, and if you’re here it’s probably because you’ve seen me working on Pico 8 things, like Cat Slime Does a Dungeon, queer jRPG Bravely Bound: Zero, or crazy related experiments like PicoScript. Becoming a patron will allow me to spend more time on all of these projects, and is a huge help to me personally as a small indie developer.

What do you get out of this? You can gain access to exclusive devlogs, art previews, a patrons only channel and role on the Kitsune Games Discord server, credit on itch and in my games, and early testing and beta access.

For the Pico 8 enthusiasts among you there’s also occasional exclusive code snippets, early access to longer and more in-depth articles, and even P8 file originals for published pico 8 games. Even if you don’t pledge, there’s a lot of resources I put out for free right on this page!

Best of all, the more goals we reach as a community, the more side games I can create for Bravely Bound: Zero; small mini-games that interact and share data with the main game! This is how Cat Slime Does a Dungeon came to be. Patrons will get access to all side games for free when they’re finished.

Finally, supporting me means you support my regular work as a founder of a game development studio with a focus on accessibility and queer inclusivity. Kitsune Games is behind several LGBT-inclusive games featuring female and queer protagonists such as Lore Finder, MidBoss, and Ultra Hat Dimension, and the majority of people working on our games are queer in some way.

Pico-8 is a fantasy console, a make belief retro console that never existed, that you can make games for. I love Pico-8, and especially enjoy coming up with ways to overcome its limitations and get the most out of the fantasy console. This means I wind up creating a lot of crazy stuff for it, like a GPIO powered SuperFX chip, a way to keep map sizes tiny through metatiles, and even a whole ass scripting language to use inside Pico-8.

My main focus right now is to try and fit a reasonably sized jRPG like you might've seen on the SNES (Bravely Bound: Zero) into a multi-cartridge Pico-8 game. To do this I'm writing a lot of utilities and code, and I intend to share that journey and some of the techniques I've used with my patrons.

Bravely Bound: Zero is a queer love story inside a jRPG made in Pico-8, which pushes the system to its absolute limits. Follow the story of Kaie Sa, a mercenary, as she sets out with her young friend Jurgen and an Imperial Knight to smuggle an infant away from the reach of the Empire. Love will bloom, in between dodging the Empire's agents as well as a rival mercenary company. 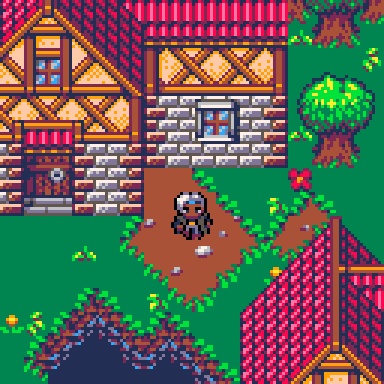 An example of this is Cat Slime Does a Dungeon; a tamagotchi dungeon diving game. It could also be a little fishing game, a card or racing game, or anything else I can think of that'd be small, cute, fun, and interacts well with the main game.

Cat Slime Does a Dungeon

Take care of your very own cat slime! Feed it items to level it up and change colors, play with it to keep it happy, and let it snooze to recover its HP after a long day. Take your cat slime into randomly generated dungeons rendered in stunning retro 3D to slay monsters, explore, and find precious items. You can then feed the items to cat slime, or transfer them to your Bravely Bound: Zero game and use them!

Cat slime somehow managed to get on Twitter by eating a phone.

Bravely Bound: Zero is actually a prequel to an earlier project I was working on, called Bravely Bound; a lesbian love story inside an RPG, where two women explore their feelings for each other while they fight an evil empire corrupted by dark magic, and in so doing cause the return of legendary pirates. All of this rendered in glorious retro 3D mode 7 battles.

If the Patreon does well enough and when I finish Bravely Bound: Zero, who knows what may lie in its future...?

Below you can find a list of all Pico-8 resources I’m working on or have already made available to the public and to patrons.

UniPrep - $5 patrons: a universal preprocessor written in C#. Preprocessing directives are prefixed by a user-supplied string, so they can be commented out. Supports #if #elif #else #define #undef #include, and supports function like macros. Also has a mode which watches a file for changes and automatically regenerates output. Great for easy Pico 8 development, with drastic performance optimization sometimes possible through macros. This is what I personally use for my serious Pico 8 projects.

PicoScript - $10 patrons: a scripting language and virtual machine for scripts inside Pico 8. Scripts are compiled to binary bytecode from a C-style syntax with a single function per script, and can be written to Pico 8 carts. This allows users to break the code limit, and page code in and out of memory through the reload command. Read about its development on Twitter.

$468.51 of $1,000 per month
At this amount my Patreon will cover roughly two thirds of my living expenses, which means I can spend a lot more time on Pico-8 projects and Bravely Bound.
5 of 5