$1
per month
Join
or save 10% if you pay annually
Support the band as they make stuff and get:

$5
per month
Join
or save 10% if you pay annually
Access to what's in the previous tier plus:

$10
per month
Join
or save 10% if you pay annually
Access to what's in the previous tier plus:

$20
per month
Join
or save 10% if you pay annually
Access to what's in the previous tiers plus:
Includes Discord benefits

$50
per month
Join
or save 10% if you pay annually
Access to what's in the previous tiers plus:
Includes Discord benefits
Exclusive Merch
Fulfilled by Patreon
Includes
Global shipping included

$100
per month
Join
or save 10% if you pay annually
Access to what's in the previous tiers plus:

Click here to see explanations of all the tiers & their benefits

Hello! We are Steam Powered Giraffe, a theatrical act/band that dresses up and pretends to be humorous malfunctioning singing robots on stage. Us being robots might be pretend, but our singing and music is not! Our music style touches on different genres from folk, rock, and pop, but is always infused with catchy melodies and three and four part harmonies!

This Patreon is setup so fans can support the act so we can continue to make new albums, music videos, livestreams, and concerts.

What the band is currently working on

Currently as of 2019 the band is working on their next studio album!

Follow along with the band and our process as we work on these songs, record them in the studio, and film music videos for them!

This Patreon is an ongoing experiment and we plan to change tiers and content based on feedback from our patrons as it and the band grows and changes.

Like most bands and entertainment acts these days we don't rely on a record label or producers and put the power of sustaining the band in the hands of the fans who want to see our act continue. We do most things in-house and that saves a lot of cost for us, but there are still costs to keeping our business going, our band members fed, and churning out new content.

For twelve years now the act has made the majority of its income through merchandise sales and we've funded the majority of our new albums and projects through pre-orders. Now with Patreon we are able to fuel a complete stream of new music, music videos, and other content while supporting these endeavors and our artists financially year-to-year.

With that said, we've also got some fun enticing benefits for different patrons tiers...like; our entire music discography featuring all our albums and never before released recordings, monthly acoustic rehearsal livestreams, 7+ years of behind-the-scenes videos and blogs, mailed physical items like postcards signed by G.G. The Giraffe our resident robot giraffe, exclusive metal die struck pins, your name in music videos, monthly mystery mail, voice chats with the band, and much much more! 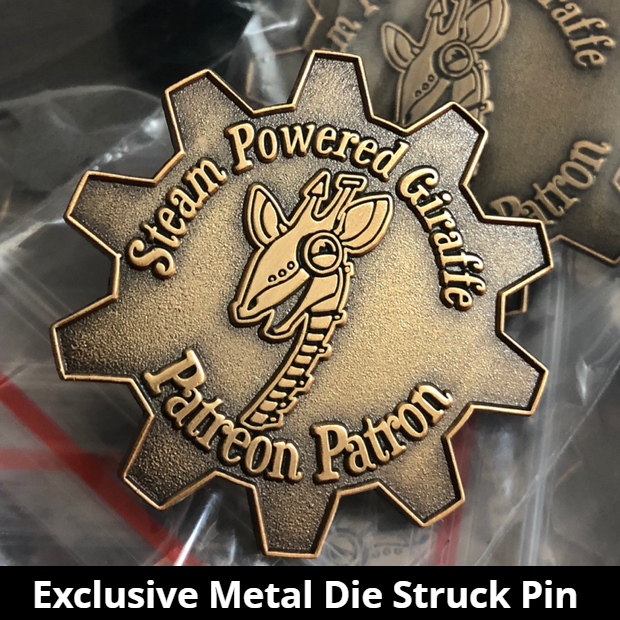 Steam Powered Giraffe is a labor of love for everyone involved, and all of our artists dedicate a lot of time just to continue the act. Regardless of Patreon, the act will continue, but so far Patreon has allowed the band members to devote even MORE time to the act and create new things for all of you!

Your support will not only help us create new albums, music videos, and more, but it will also support the talented folks who do work for us (by helping the band pay them for their work); our live show dancers, merchandise, booking, and social media folks Chelsea and Camille Penyak and of course the robot performers themselves Bryan Barbarin (Zer0), Isabella Bennett (Rabbit), and David Michael Bennett (The Spine).

We encourage anyone interested in finding out more about the band, what we are all about, the people involved with it, and the fun fiction & lore behind the band's robots to visit our official website at www.steampoweredgiraffe.com and to also check out our YouTube channel at www.youtube.com/spgiraffe where you'll find tons of our official music videos, songs, audio podcast episodes, and other fun video related shenanigans.

Visit our FAQ for more information!