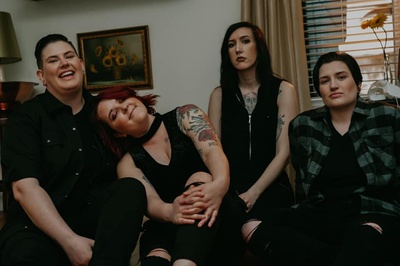 $4.50
per month
Join
WOW! You are now officially a true Strange Breed super-supporter, and we couldn't love you more if we tried (No, we probably could xx).

Times have been especially tough for artists lately, so when we say we appreciate your support more than we can find the words for... well, we really, really do. It helps ensure that we can continue making music, and queering the status quo of the modern rock landscape! The least we can do is offer you some new and exciting exclusive content!

Upon becoming a patron, you will receive immediate access to all prior posts, and will be able to hear our new single "Tethers" a week early!

WHAT DOES YOUR MONTHLY SUPPORT GIVE YOU? (All exclusive to Patrons):
THANK YOU SO MUCH FOR YOUR LOVELY SUPPORT! We couldn't be the band that we are without YOU.

Strange Breed is a 4 piece, all queer, all-female alternative rock band based out of Vancouver, BC. Sounding reminiscent of every 90’s femme rock anthem while keeping a firm grip on the modern alternative-rock sound of today.

The group released their debut album, “Permanence.” in September 2019, and shortly after embarked on a cross country tour spanning from Vancouver Island to Montreal, QC. Within the first 3 weeks, “Permanence.” cracked the Ear-Shot Campus Radio Top 50 Charts (Week of Oct 1 2019). The album also made Beatroute’s “Top 10 Vancouver Releases of 2019” List, while the individual track “Witch Hunt cracked CBC’s list of “Most Underrated Songs of 2019”. Most recently however, they released the single entitled “Reputation”; an ode to justice for victims of assault, which found itself on Apple Music’s “New In Rock” Playlist and on CBC Radio 2: The Strombo Show’s Top 100 Songs of 2020 List.

Within their local music scene, they have been regularly invited to play large local venues such as Fortune Sound Club, The Rickshaw, Venue, Imperial, and were also finalists in MRG Concerts’ Elevate Music Project at the legendary Vogue Theatre, placing second. Their debut album, “Permanence.” has been the catalyst to the bands quick and growing notoriety in their local scene and beyond, even catching the attention of the industry leader, Alternative Press Magazine, who mentioned the band in “Top 50 Canadian Artists to Watch”. Strange Breed has their music played on popular community/campus radio stations across the country including CBC Music, CITR 101.9 FM & CJSW 90.9 FM, 96.9 Radio Humber, 91X FM, and were also Top 100 Finalists in CBC’s Searchlight 2019 Competition, listed as a producer’s pick.

Currently, you will find them “behind the scenes” writing new songs, producing their sophomore album and “queering the status quo” of the music industry.