The history of Sweetie Bot Project

The project started two years ago in 2014. The main goal we want to achieve is to build the fully functional pony robot! We have built two prototypes right now and ready to build the next one.

The first model was built using cheap servomotors, and was not able to walk, but let us gain necessary experience with walking robot kinematics. Our second prototype can walk and perform some complex movements.

What are we working on right now?

We have two active branches of robot development:

The next prototype will be improved in several aspects, but the most noticeable will be the design. 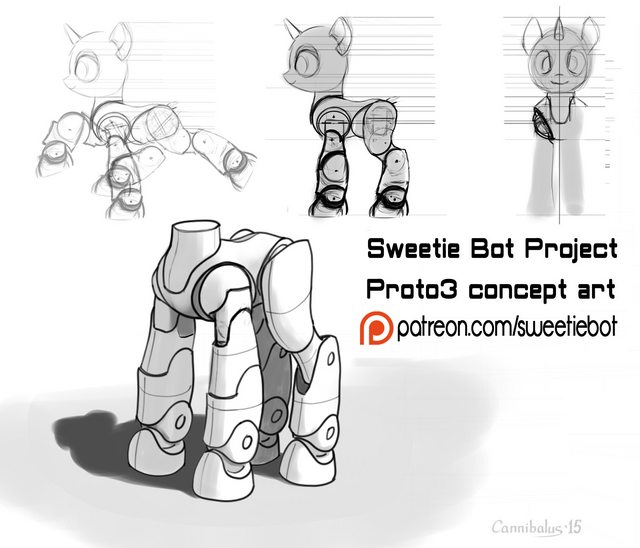 Why do we go on patreon?

But it’s also a very expensive project and tends to become more expensive with each prototype iteration.
The electronic parts have to be purchased all around the world, and most of them cost way more than in most hobby projects.

You can't build walking robot without good servomotors. Servomotor is a rotary actuator that allows for precise control of angular position, velocity and acceleration. This things actually moves legs and neck! Our last prototype uses 24 servomotors to move. They are $40 each! You also need a lot of expensive electronic, like microcomputer, battery, sensors, screens etc.
And don't forget 3D printer, electronic equipment and CAD software!

That’s why we need your help. With your support we can build the new prototype faster and make it better!

We are going to show some WIP (work in progress) materials like videos/animations/screenshots or photos.
But don't expect spectacular video soon. Be patient, she is very young, and only starts learning how to move :)

Q: Why is it a pony?
A: Because Friendship is Magic! And witchcraft sometimes.

Q: Is she Sweetie Bot?
A: She is designed to resemble Sweetie Bot. We call her ProtoPony2. Next prototype will be even closer to how Sweetie Bot looks.

Q: How long does it take to build a fully functional Sweetie Bot?
A: It's hard to tell. Sony's Computer Science Laboratory has created around 6 prototypes during 3 years, before first AIBO went on market.

Q: Are you going to go opensource/open-hardware?
A: We plan to release the core code under an open-source license as soon as it is relatively finished and cleaned up with a decent documentation.

Q: Can I contact you directly?
A: E-mail: [email protected]