Caytlin Vilbrandt is creating content you must be 18+ to view. Are you 18 years of age or older?

Hello! My name is Caytlin Vilbrandt and I’m on Patreon to fund the creation of my weekly webcomic, Tamberlane.

If you like Redwall, Wolf Children, Beatrix Potter, The Secret of Nimh, Once Upon a Forest, Ferngully, Animals of Farthing Wood, and similar properties, you'll like Tamberlane!

What You'll Get By Becoming a Patron

By backing Tamberlane on Patreon, you'll receive exclusive perks like:

Pledging to a higher tier means you get all of the rewards from the previous tiers as well as your new bonus perks!

But that's not all! Not only do I create Tamberlane, but I draw other things too! I have other projects in production, plus a multitude of personal projects and unrelated drawings. And I post behind-the-scenes stuff about that on Patreon, too!

But most of all, thank you for considering adding your support for Tamberlane. Every single dollar helps!

You can always get your rewards on the Reward Index! 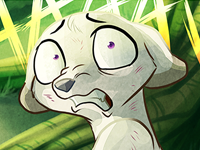 
Want to talk with other Tamberlane fans? Join the Foxglove Comics Discord and enjoy our comfy LGBTQIA+ friendly space!