$1
per month
Join
Thanks from me, and access to the behind-the-scenes blog posts, with title reveals, character revelations, raw and alternate cover images, and theoretical musings.
Free eBooks!

$4
per month
Join
Thanks, blog, ebooks, and—
Free zines. You’ll receive a free copy of each new episode completed during your patronage in chapbook form, shipped as they're printed—as well as a free (and personalized!) copy of each new collection in paperback form.

My name is Kip Manley; I'm a writer living here in Portland, Oregon, where I labor away at a slyly romantic urban phantastick, a gonzo noirish epic doled out in coffee-break sized installments.

City of Roses is—well, I've tried summing it up over the years, fielding taglines that reach for the intriguingly oblique (“The ten thousand things, the one true only”) and the wryly self-deprecating (“The city of Portland, only with more sword fights”). —It's about what happens when Jo Maguire, a highly strung, underemployed telemarketer, meets Ysabel, a princess of unspecified pedigree—but it's also about ghost bicycles, retired river-gods, boar-hunts in shopping malls, secret struggles over cities that might never were—but it's also about Violence, and Power, and Romance, about genrejumps and genderfuck and hearts broken cleanly and otherwise, and that moment when the bass and all the drums except maybe a handclap drop out of the bridge and you're left hanging from an aching thread of melody waiting almost dreading the moment when the beat comes back—and also, yes, the occasional bit of swordplay. 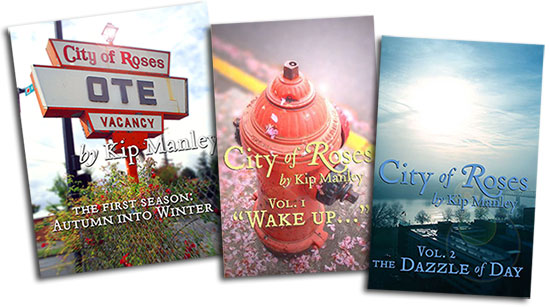 What others have said.

“City of Roses by Kip Manley is the closest I came to a really well-crafted, character-driven fantasy… its mix of young, bohemian characters and mythic fantasy tropes reminded me strongly of Charles de Lint. Manley's prose style is a couple of cuts above the increasingly tedious first-person narrations of urban fantasy.“ —the Guardian

“Kip Manley is worth reading. He says interesting things, and he actually knows how to write.” —Teresa Nielsen Hayden

“As I read "Wake up…", I found my cynicism undone over and over again. ‘Oh,’ my inner cynic said, ‘look, here's Celtic-tinged music. Here's the love triangle, with genders switched up and mixed. Here's the smart-ass protagonist getting in trouble because she's too willing to throw a verbal punch.’ But then Manley would whip those familiar elements into a moment rooted in idealism and hope, but with a healthy dose of life's tragedies, the entire, swirling, beautiful mess tumbling my inner cynic on her ass.” —Bookslut

”Kip Manley's City of Roses is the most fun I've had with a book in a good while.“ —Felix Gilman 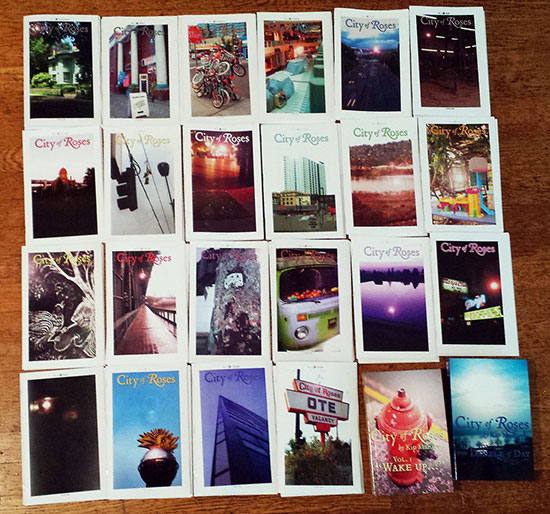 What I’m asking for.


The first season of City of Roses, Autumn into Winter, has been completed, and is available for free online, in chapbook form, or collected in ebooks and paperbacks available at the usual outlets. It's done, but it took ten years or more to do—I'd rather like to pick up the pace for seasons two (Spring; Summer), three (Summer), and four (Winter, and then Spring). A regular stream of Patreon money will help to clear the time and mental space I'll need to do that; the goals and milestones to the side there are a stab at what that might look like, and take.