$100
per month
Join
As a Funding Angel, you are an ambassador for the organisation as well as incentivising others to give so that, together, we can sustain our work on key issues. In return, you will receive

Tipping Point North South (TPNS) is a co-operative that supports and initiates creative, campaign-driven projects that advance the global social justice agenda. It is a ‘for the benefit of community’ co-operative, set up to work in the film and creative industries as well as within the not-for-profit sector ie with colleagues and partners in the international NGO campaign community. Its primary interests are to serve ‘community’ at all levels – from local to national to international – through these two key routes and with a particular focus on global social, economic and environmental justice issues.


“ The need for documentaries that ask hard political questions is greater than ever, as the main TV producers and channels abdicate their responsibility. So many stories to tell, so few make it to the screen. Good luck to Tipping Point Film Fund.”
Ken Loach – film director and Palme d'Or winner

“I’m fully supportive of what Tipping Point Film Fund is doing. To use the medium of film to move and inspire people to get involved in important social justice issues is critical… we have an opportunity right now… we must make use of that opportunity and momentum and ensure our voices are heard."
Danny Glover – Actor, Producer and Campaigner

“ Having been closely involved with a feature documentary that was very effective in its effort to raise awareness about Palestine, I know how important it is to back film-makers who have stories to share with us – often personal stories which can have both personal and political impact. Tipping Point is giving invaluable support to such projects.”
Jeremy Hardy – comedian

So far, TPFF has acted as executive producer for two feature-length documentaries:  Open Bethlehem and We Are Many. 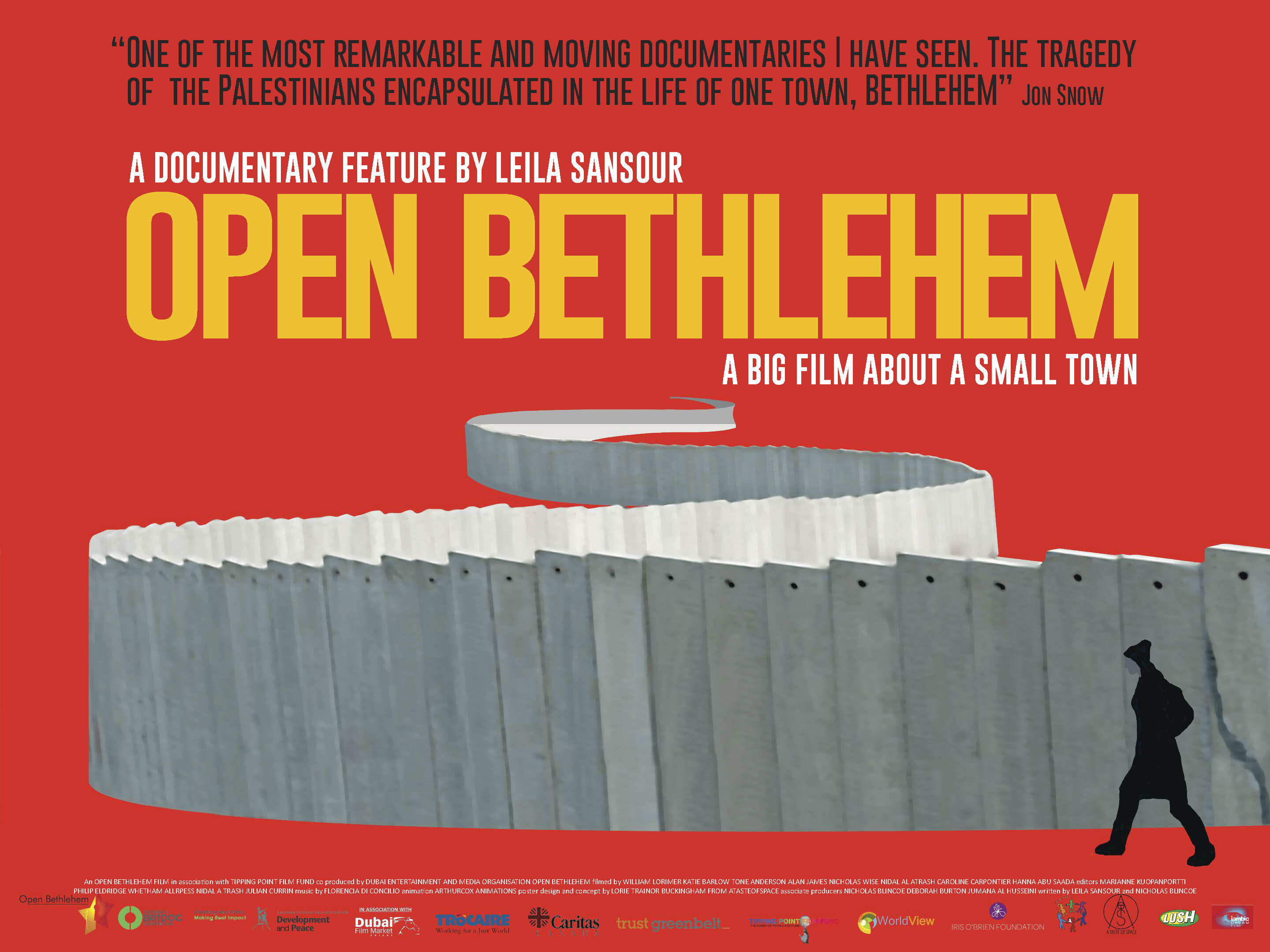 Open Bethlehem was released in the UK in 2015; had its Bethlehem Premiere in Spring 2016 and continues its screenings programme around the world. It has been selected by Guardian as its 'not-to-be-missed' film of the week:

“Leila Sansour’s documentary Open Bethlehem follows her campaign to stop occupying Israeli forces encircling her hometown with a concrete wall. Sansour’s film, which follows her attempts to unite Christians, Muslims and Jews in their desire for free access to the Holy City, is the kind of art that peace processes are built on.”
Peter Bradshaw – the Guardian's film critic 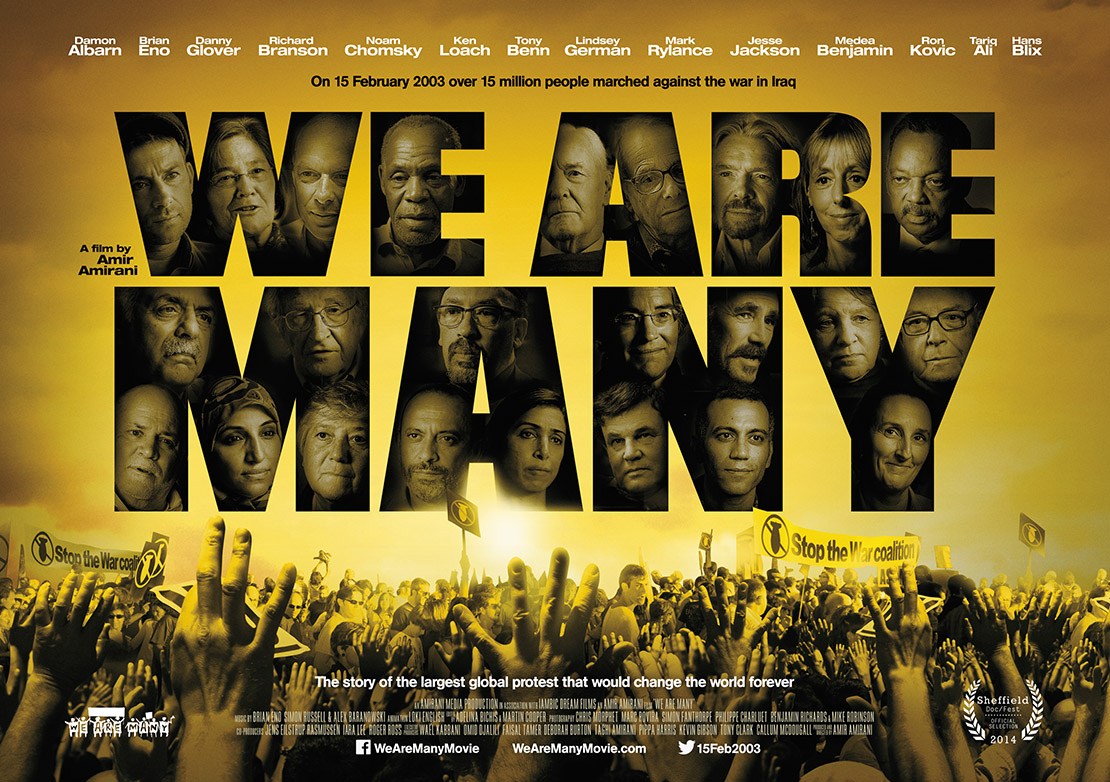 “The global protest against the Iraq War on 15 February 2003 was a pivotal moment in recent history, the consequences of which have gone unreported. Amir Amirani’s We Are Many chronicles the struggle to shift power from the old establishment to the new superpower that is global public opinion, through the prism of one historic day. I urge you to support this film in whatever way you can.”
Oliver Stone – Academy Award winning film director


We Are Many was released in the cinemas in May 2015 and will be released in the USA in 2020. The cast includes names such as Danny Glover, Ken Loach, Mark Rylance, Brian Eno, Damon Albarn, Tony Benn, Jesse Jackson, Hans Blix, Norm Chomsky, Tariq Ali, Ron Kovic and Medea Benjamin among others. It premièred at Sheffield Doc/Fest in the UK, getting a standing ovation from the audience, much feedback on twitter and some brilliant reviews.


“A work of beautiful rage. Provokes anger and goosebumps”
Empire

“incredibly ambitious… gripping. The only film I’ve ever watched where the audience started clapping halfway through…”★★★★★
Huffington Post

“rousing and moving, it’s a film that should be seen by the many” ★★★★☆
Radio Times

We are raising production funding for our fully developed film  The Power of Us about co-operation. The film will show there is a global movement that is offering an alternative to the neoliberal economy and will initiate an urgent and timely global conversation about the power and possibility of co-operation.

Much of our work is partnership focused. It may be film based, campaign based or a mixture of both and to date, has embraced a range of partners. Highlights our partnerships include:


Our diverse body of creative activism

Please check out ' Creations' to get a flavour of our activities so far - videos, photographs, comics and reports. Here is the showreel of our work. If you are interested in more details, have a look at hightlights of our work at our website.