$1
per month
Join
Internet Friend tier. Look, I'll be honest, don't feel pressured into donating. It's an entirely optional  thing. IF you do feel like donating but want to see how things go, trial backing as it were, take this tier. One buck a month? Shit, that's less than 5 US cents a day, you literally can not go bankrupt at this tier, unless your bank is rubbish.

$5
per month
Join
Grattitude, you have it. By default.
So everyone that donates can vote stuff up and down in the list, but you? You can put something in the list. Now, it'll start with no votes(bottom of the list), which isn't bad but I'm sure your suggestion isn't some rubbish like a Lorcin or Jennings or something, so it'll probably do well.

$10
per month
Join
That's some gucci goodwill you got there mate.
Okay how about this- you get to put an item straight on the list, and it'll start at number 15 slot?
No?
Alright, how bout you also get direct thanks for your support and I'll put your name IN the texture. IN. THE. TEXTURE. Oh and in the Authors field for the arma config.

Hi I'm Kristina "Toadie" Miller, and I'm a 3D animator by trade and for the past year and spare change I've been creating custom content for ArmA 3. It's been an excitiing new experience for me, the challenges of the engine and it's limitations, the creative challenges of making animation that looks good in both first and third person, it has been what I'd call a momentous success for me. It's also made me somewhat of ArmA's go-to "arms dealer".In raw equipment terms, if there's a niche itch someone needs filled I've either- attempted to fill it, am currently working on of filling it, or plan to in the not to distant future. And what I'm proposing here is I'd like to step that up to the next level, with your help.

Traditonally, while all of the animation, sound engineering and actual arma-side configuration and porting of everything I've made for Arma has been predominantly been my own work, the majority of the source meshes (that is, the the physical object that the weapon looks like) have been sourced elsewhere (created by the likes of Milennia, Sarv,Tigg, etc.) While the majority of these look fantastic, availability of source material tends to be a factor more than anything (and sadly quality and consistency is not always possible) when it comes to deciding what gets done, and I for one would like to break free of this limitation and start from scratch. This would not only for more variety of content as a whole (as I'm not tied to what's already out there, but it would on the whole ensure a MUCH higher level of consistency across the board. The problem: time is an impinging factor.

As it stands, getting a weapon into Arma, not even counting creation of the assets in the first place, takes about 10 hours all told, depending on complexity. Even for something largely modular such as my most recent release, Steyr AUGs, all told it took about 25+ hours over months to set up.
To go the next step and go from scratch is asking for about 40 hours per item, from Blank canvas to released item. Minimum

WHAT I AM ASKING FOR


What I'm asking is basically to subsidise some of the additional time that developing assets entirely from scratch at a pace that means I'll actually get through it all before the end of time. To be clear, I'm not asking to make a career out of this, I'm more than content to continue my casual scut work day job. The idea is that the more is contributed, the more time per-week I can dedicate to creating for arma, and the more scutwork I can subsidise away.
Why?
Because I love ArmA. While flawed in many aspects, ArmA is very much the posterchild for success despite adversity, and is probably the best social gaming experiences you can have. And I want to give back to something I get so much enjoyment out of.

WHAT THIS GETS YOU

You'll notice that I'm not setting a material per-month goal or a comissionable rate, and I've done this for one specific purpose- I don't work linearly on any one thing. However, that isn't to say there won't be a performance metric. The metric I've set for myself is about one weapon a fortnight(though this isn't concrete as it depends on the complexity of the item itself. From Scratch, to complete,ingame and entirely ready for release (and depending on what's practical or required, colour/camo variants). The plan is to then push out a publicly available arma addon of the content at the calendar start of every month.

All content I make will be, as always, released unfettered and publicly available as the mods themselves and all the source material, including configs, will be available under an open-source Non-commercial share-a-like license.


At the base level donators will get access to both the source material and the addons as work progresses, as well as some amount of control in the "yay or nay" on how items are going, as well as access to item priority in "The List"

Additionally, more time available means more testing time. While last year I was time locked and a one-man dev team, I had limited time to do my own stress-testing. It's why small things would crop up in updates. Well, no more. If I've got more time to Arma Work, I've got more time to test, so everything will be going out AS close to bugless as humanly possible.

The List is in essence the prioritised list of all items not yet completed or currently in progress. It's a long list, currently about 200 items of work for Arma, comprised of personal interest items, requests made, and pipe dreams. Currently there's no real order of importance to the list, but with the addition help of donators voting on the order, I shall be working in a direct top-to-bottom order, and donators will directly vote on what goes where in the order.

So I want to demonstrate the level of detail you can expect out of my work as a whole as part of this new scheme. Obviously, Every weapon will be appropriately animated, and you already know what to expect on that front already, but I want show of some of the finishing detail on that you can count on my delivering. And I'd like to say ahead of time, neither of these are photo-textured or procedurally painted, it's all hand-crafted love. 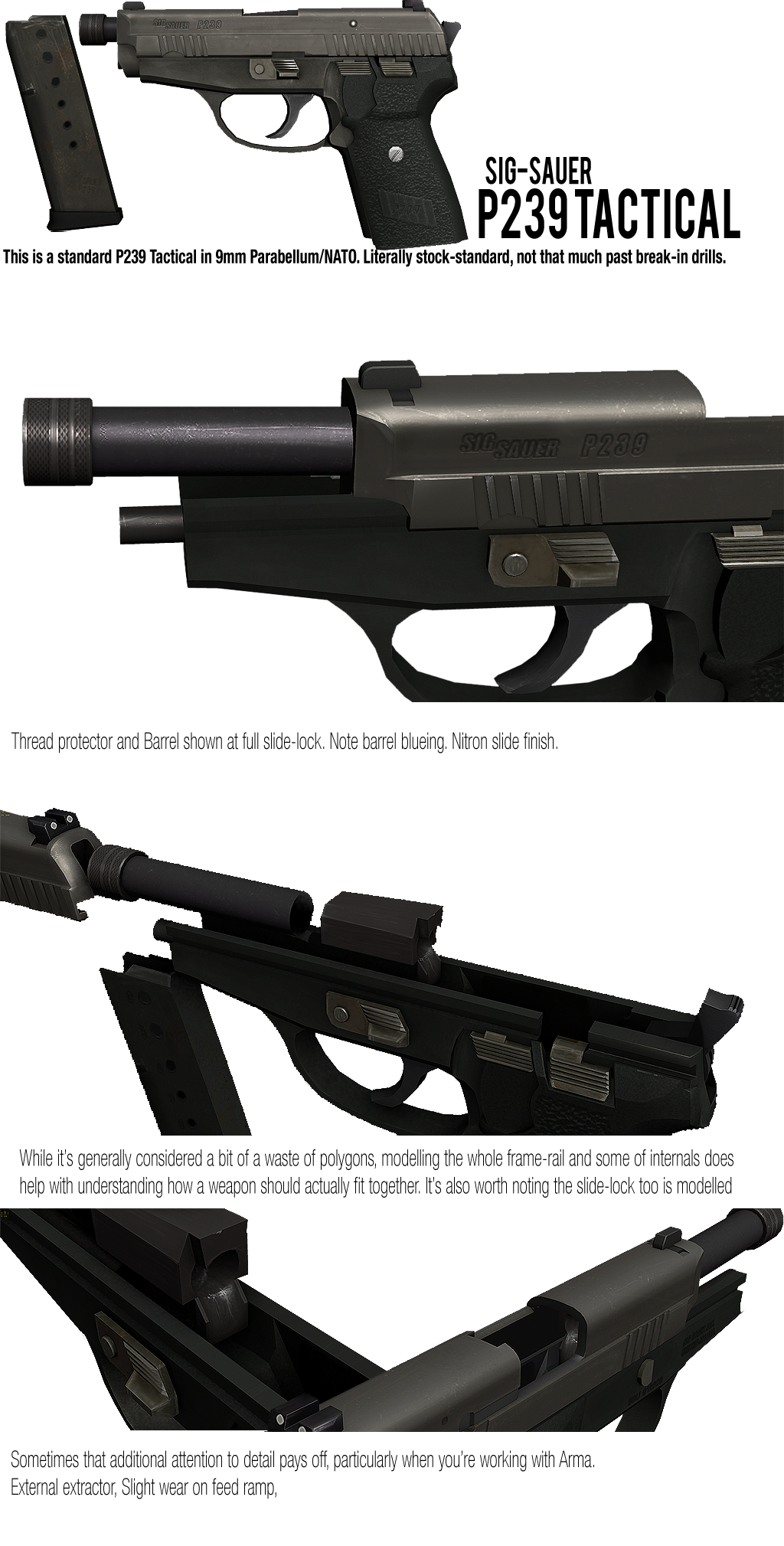 So, one of the things I want to deliver more upon with more time at my disposal is getting you guys more direct access to myself, to help on how to develop for Arma, and more places to use Arma Stuff in general. These range from live streaming on development through to setting private and public Arma 3 Servers. See the milestone goals for information on specifics.

Is donating mandatory? IF I don't donate, will none of the things you're talking about happen?

NO. My plan is to with or without donations to begin work from scratch, albeit at a slower pace. Donating will help me create more time to work on these arma projects, therefore completing them faster.

Am I paying for a mod?

NO. By donating, you're not paying for any mods. All content will be publicly available for free at release, and all source files will be open for download. Donations are directly paying for development time, not content.

If you suddenly get a job that prevents you from keeping rate , or any other reason that production might get stalled, what happens?

If for any reason at I'm unable to work at a rate approximate to what's being donated (whether that is by personal justification, or outside factors)  I will put a stop on donations, and will only start up again IF I can guarentee the level of output will return.


Am I REALLY paying for a mod?

No. If you feel you might be, or at all feel that you've been pressured into donating, don't.

Where will I be able to view progress?

Backers will be able to check the backer feed here. I'm also opening a blog which will chart progress for everyone, as well as provide details for additonal benefits as neccesary (Stream Times,urls, etc). Additionally, I have a Twitter,which will also carry info in a more immediate state.

$250 - reached! per month
At this point we're basically beyond what I was hoping to ever achieve with this, so I'm going to really make your dollars dance for it. If this milestone ever gets reached, all the above things happen as well as