Did you just join my team of patrons?! Yes, yes you did. THANK YOU! As an official patron, you'll have access to my patron-only feed and early access to music and/or videos. You'll immediately get the secret link to Tom at Maharishi University of Management in the David Lynch MFA Screenwriter's Program and you can follow along in real time with daily posts. Features videos, exciting info for film and writing buffs, and every semester Tom gets to ask a question of David Lynch. Don't miss a minute of Tom's conclusion to his 7-year Performance Art Piece, "Professor Miller". 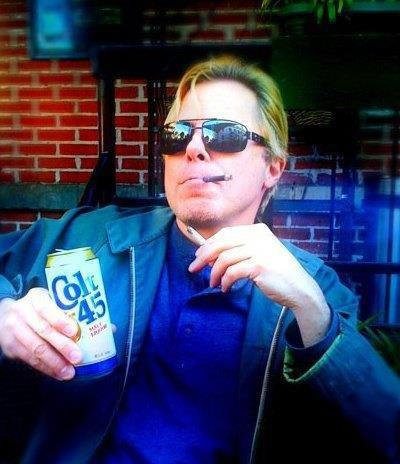 As a nationally recognized performance artist for over thirty-five years activity in Gainesville, Florida - the known Center of the Universe, here's the deal: New Millerworks for 2019 can use your help. I am asking you arts and music-devoted heavy hitters, to make a small monthly contribution to FREDInk Records (my recording and arts preservation company) and its 2019 projects. In exchange, be on an A-list in which you get a first and exclusive look at new Millerworks, and receive opportunities to collaborate and be credited on projects that will have nation-wide attention.

2019 is exciting, and original art and music has never been more important. The last couple years, I was accepted to an exclusive David Lynch Screenwriter's Program at Maharishi University of Management in Fairfield. I directed Sunset Village off-Broadway and in Gainesville's Acrosstown Reportory Theatre. I wrote a feature film screenplay called, Roach Buddy. A couple nice articles came out about my work including this one from Home Magazine, and this one from Gainesville Downtown Dot Com. I joined The Threetles as their bass player (Gainesville's only three-person Beatles Tribute band!) I read all of Donald Trump's Fibs in a Marathon Performance and was interviewed about it on the radio. I earned a B.A. from the University of Florida in Theatre. I've spoken to birds with my patented Birdometer in Depot Park, sound-designed King Lear for the University of Florida, and assembled the world's first sculpture made entirely of Nothing. Director Michael Bobbitt has produced the world premiere of my play, UMMU at the Acrosstown Theatre. I've published an expansive free public Gainesville FREDInk archive of music, art, poetry and videos. I produced Michael O'Meara's new album, The Right Track which features some of Gainesville's finest musicians. I played a feature role at the Actor's Warehouse in their production of Se Llama, Cristina. I currently host the the Tabernacle of Hedonism at HardBack Open Mic Show which provides a stage to both experienced, and up-and-coming talented performers in the Gainesville Community. My 34-year-running open mic shows are always completely free to the public. From stage, to multi-media, we have been doing the work of good. See some of the cool stuff we managed to pull off in Noel LeRoux's article, Miller Tries Making Sense of Absurd.

In 2020, I'll be performing a one-man show, Thom Pain (based on nothing) by Will Eno. My Screenplays Roach Buddy, and Tabernacle of Hedonism are on the market and listed on The Black List. We are putting the Miller/Davidowski documentary, "Nothing" into Indie Festivals. We're planning the world premiere of Elvostrich; half Elvis, half ostrich! I'll be playing the lead in a provocative experimental play, and a few other grand surprises!

Won't you take a moment of your time and support local art and music today! Help keep Gainesville artistically diverse, weird, and wonderful. Be a part of something magical, provocative, and diabolically funny. Just twenty dollars a month will have a profound impact. Be an arts insider. In exchange, receive exclusive opportunities and rewards, and see the direct impact of your contribution in action.