$1
per month
Join
Thank you so much for your support. It means a ton to us to have the community we love helping make sure we continue to exist.
Includes Discord benefits

$5
per month
Join
At this tier, you gain the forum title Patreon Bronze Supporter for your TouchArcade forums account. Please make sure the email address you're using for the forums and Patreon are the same.
Includes Discord benefits

$10
per month
Join
Supporters at this tier gain the forum title Patreon Silver Supporter for their TouchArcade forums account. Please make sure the email address you're using for the forums and Patreon are the same.
Includes Discord benefits

TouchArcade is the internet's largest and oldest iOS gaming site. We've been covering iPhone gaming since before the App Store even launched with early stories such as Gameloft showing interest in the iPhone, Unity announcing upcoming iPhone support, and more. Since then, our team of writers, which consists of the most dedicated iOS gamers on the planet, are constantly pumping out news, reviews, guides, interviews, and all sorts of other great content while keeping their fingers on the pulse of iOS gaming 24 hours a day. We've got an amazingly popular podcast we've been recording weekly for years now, and the most active iOS gaming forums on the internet hosting discussions of quite literally every major event and game release, from Freecell to Chaos Rings III, in iOS gaming history.

Over the years, we have been on the ground floor of iOS gaming as it has evolved from simple tilt-based maze games to full-fledged recent console game ports like BioShock. It's been an exciting and entirely unpredictable ride, as iOS gamers rarely know what's getting released from week to week until the games are revealed in our weekly new iPhone games coming tonight posts. While the mainstream media largely ignores mobile gaming, we've discovered countless hidden gems of the App Store, sat down with legendary game developers, met with world-renowned pro skaters, discovered unheard of indie studios which have become household names, and all sorts of other crazy things. We're considered the authority on iOS gaming, and have an audience that includes gamers and developers all over the world, as well as visitors from nearly every level of Apple.

When TouchArcade was born, the App Store was a very different place, and our web site was structured around the tried and true idea of building a great place for iOS gamers to visit every day and financing the day to day costs of that operation by providing a platform for iOS developers to target those gamers via unobtrusive, highly relevant, banner ads. For a long time it worked great, as iOS games were sold for years with a very traditional mindset of selling a game for a few dollars, and marketing that game with a small advertising budget. As the iOS industry grew, sites like TouchArcade thrived. 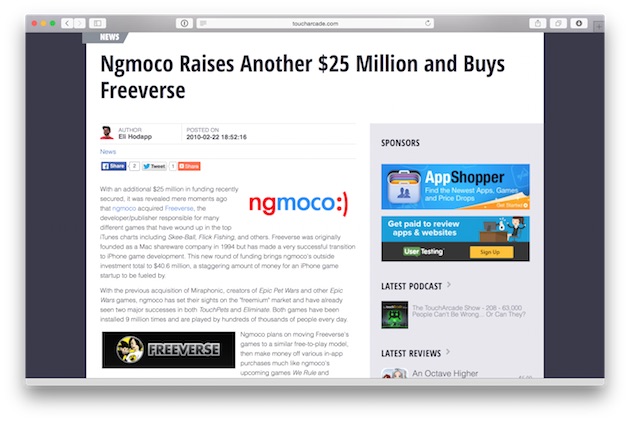 Unfortunately, the iOS game industry has changed drastically. Needless to say, the App Store of 2016 is a very different place. Free to play games have almost entirely taken over, and the hyper-metrics-driven business models of giant free to play developers has given rise to a new form of analytics-driven marketing known as user acquisition. Instead of buying banner ads on sites like TouchArcade to reach consumers, marketing a new free to play iOS game involves funneling often hundreds of thousands of dollars (or more) in to companies whose sole purpose is to run elaborate in-app promotion networks to get people to download a new free to play game. In the face of this new style of game marketing, traditional advertising revenue has all but completely dried up, and without additional support TouchArcade is dying.

At the height of the early days of the App Store, there were dozens of iOS gaming sites covering every conceivable angle imaginable. In recent years, with the shift to free to play and lack of financial support from developers, nearly all of those sites have shut down- Leaving us among the last standing. The few that remain now have either drastically downsized, diversified into covering other platforms, are shifting business models to host developer events instead, are producing significantly less content, or worse yet, are publishing far less interesting content through focusing on padding traffic via exclusively posting things ultra-casual free to play gamers might be searching Google for. We could potentially gain a small stay of financial execution by exploring the option of sponsored posts, obnoxious advertising, and other ways to generate revenue to keep the site alive, but they all come with the significant side effect of making the site worse for our readers... Which doesn't make them seem like viable options at all, as our community is everything to us. 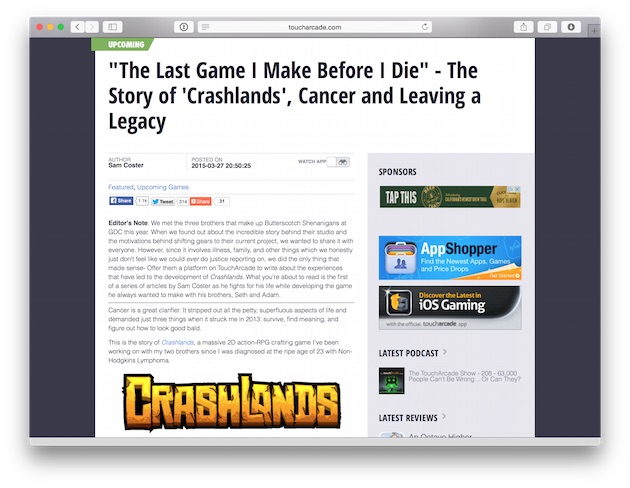 For TouchArcade to survive, we need your help.

We want to continue our focus on all the amazing things happening inside the world of iOS gaming without compromising our focus or diminishing the experience for our readers. We want to keep providing incredibly in-depth reviews of obscure games you might not have heard about otherwise, we want to keep shining spotlights on sleeper indie classics, and we want to keep the internet's best iOS gamer community alive and healthy. We want to continue exploring the specialized corners of the App Store no one knows about. It's hard to imagine how boring iOS gaming would be without a site like TouchArcade to highlight the massive amount of incredible games that slip between the cracks of Apple's featuring system, and where the studios behind those games would be without us bringing attention to their efforts.

With your Patreon support we will be able to keep doing all those things and more for a very, very long time.