My name is Nate Lanxon and I've been a podcaster of technology news for over ten years -- professionally at CNET and WIRED, currently at BLOOMBERG, and now also independently with Tech's Message.

Joining my Patreon members club means you're supporting me and the show, plus in return you get access to loads of exclusive content and features!

The main benefit is access to the extended version of Tech's Message. This includes extra stories, discussions & outtakes in every episode. It's also ad-free and is delivered in a higher-quality MP3 file.

Other benefits on offer include:


Why should I join the Tech's Message Patreon?
The best reason is because you've been enjoying our free version for a little while and value it enough to want to kick in a bit of cash to help us out. But an equally good reason is because you want to get access to the extended versions of the show, the weekly bonus episodes, or the uncensored and raw versions of our recordings.

I've never heard of Patreon. Is it a scam? Is it safe?
It's a hugely popular service that lets you subscribe to a creator in the same way you'd subscribe to Netflix or something. Artists use it, famous singers use it, a trillion podcasters tired of having to ask listeners to buy a mattress or an audiobook rely on it. You sign up using your PayPal account, choose the benefits you want, and each month your PayPal account gets debited for them. Simple! You can also set limits on how much you want to be charged per month, so you'll never pay more than you agreed to up front.

Do I have to commit?
Nope. You can try us out for a few weeks if you want, or even just one week, and cancel if it's not for you.

How will I get the new version of the show and the other benefits?
When you pledge, you'll automatically be given a new RSS feed just for you. You simply paste that into Apple Podcasts or whatever app you use and the new episodes show up instantly -- no logins, no fuss.


What's the extended version of the show like?
Contrary to occasional belief, it's not the regular version but with the crap bits left in. It's actually the other way around: the extended version is the main version we write and record, then some of the good stuff is removed in order to make a short, free version available to the wider public.


Current Patrons agreed to let me post the extended version of episode 164 here in full so you can listen to it for free and compare it to the free version. Both are attached to the  bottom of this blog post. You'll notice that:

Below is a screenshot of episode 164 as it appears in Logic Pro X, which I use to edit the show. You can see the bits in green are those marked for the extended version, and the red bits are sections cut from the main show and used as outtakes. The blue parts are those that remain in the free version. Everything else is removed. 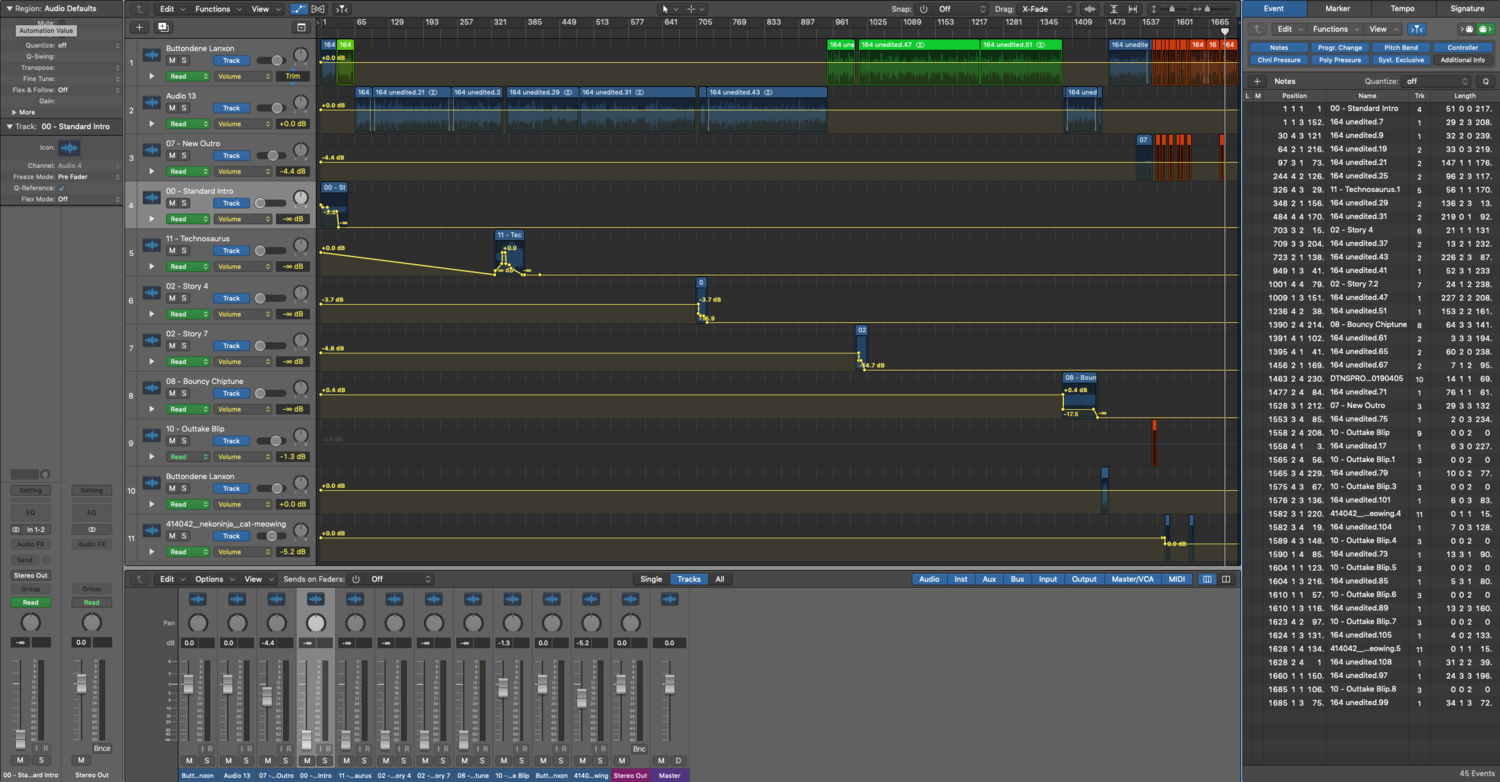 What the hell is this Discord thing everyone's banging on about?
It's a free piece of software for your PC, Mac, iPhone, iPad, Android device, even your web browser, that's like a combination of an old-fashioned chat room, Skype, Slack, and an instant messenger rolled into one. Except it's super slick and designed specifically for private groups. You basically get to chat with me (Nate), other hosts and guest hosts like Ian, Andy from CNET, Nate's wife Kate even, as well as all other Patrons. It's also where we stream the live version of the show and other live listeners chat about whatever we're saying. It's a lot of fun. Here's what it looks like: 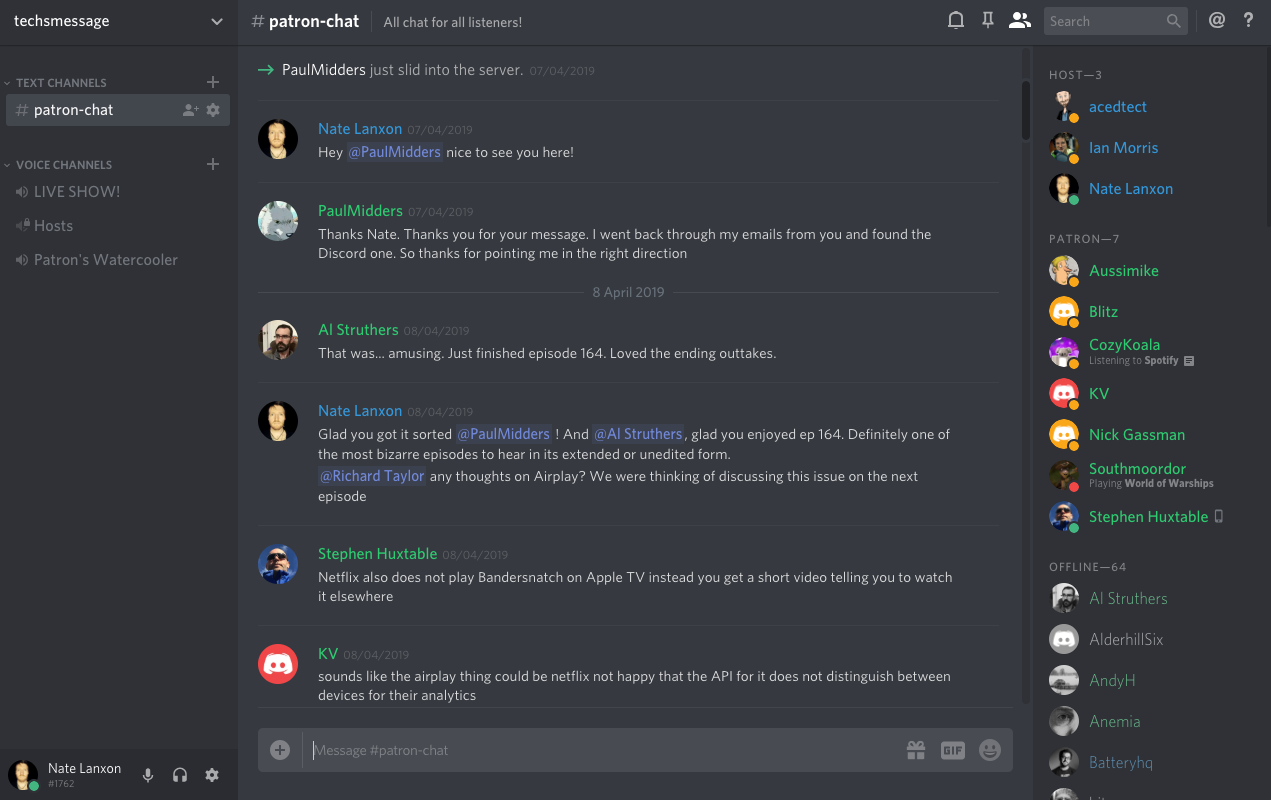 Why should I pledge when I can listen for free?
In its current form, Tech's Message takes about  10 hours per week to produce (which includes everything I handle myself, from story research and pre-writes, to recording and hosting, to post-production, editing and re-edits, and finally to publication and promotion). That's on top of my full-time job as a journalist and editor. Plus, things like microphones and editing software cost money, and my co-host is a freelance journalist and so the show literally pays for his rent.

I thought that's what the ads were for in the free version?
No. They only exist because our publisher Acast wanted to put them in to offset the fact that hosting a popular show costs them money to host and distribute. We have absolutely zero connection to those ads -- we only hear what they are at the same time you do! -- and I give all the money they generate to charity.

So the Patreon lets me support you directly?
You got it! Collectively, you help make the difference to how the show is shaped, developed and expanded.

Thank you from the very deepest part of my aortic pump in advance for any help you can extend to me, the show and your fellow listeners. I look forward to making even more podcasts for you in future.

- Nate Lanxon (and Robin the cat, if you watched the video).

PLEASE NOTE: Your pledges are per weekly episode, not a one-off single payment or donation. You'll be billed at the start of each month for the four (or five, depending on the month) main episodes but NOT for any additional Patreon-exclusive episodes. For example, if you pledge $2, that's about $8 in total per month.