Patrons at this level have my deepest thanks!  Also you get access to the weekly Livestreams, monthly wallpapers, and the sketch requests pool I'll be filling every month.

Patrons at this level receive the comic pages in their full size at 300 dpi.  You also receive access to one early page whenever I have buffer pages on hand.  Plus you get access to the livestream, the wallpapers, and the sketch request pool.

Behind the Scenes Tier

Patrons at this level receive access to all the backstage stuff, like scripts, drawings in various stages, my custom photoshop brushes, etc.  Also, whenever there are buffer pages stocked up, you will get access to all of them!  This comes with access to the livestream, the wallpapers, the pages at 300 dpi, and the sketch request pool. 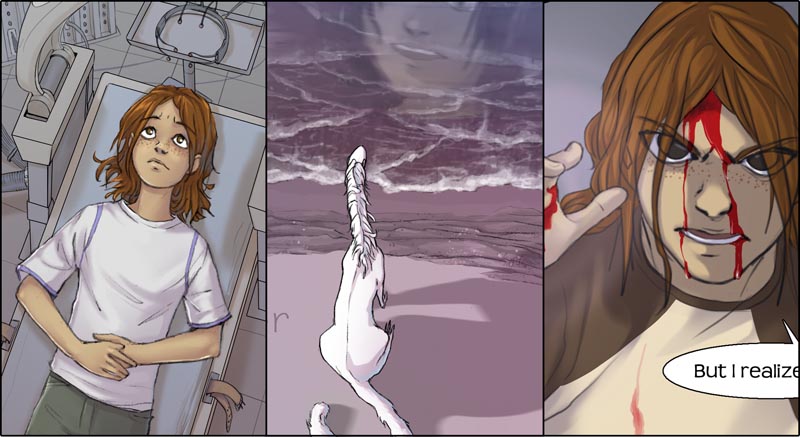 White Noise is a science fiction webcomic that has been running for 11 years (yup, that long).

130 years after the alien invasion, humanity is still divided between the genetically pure and those descended from the invaders’ experiments. An organization calling itself GECOW has taken upon itself to continue these experiments with the intention of creating super soldiers to protect the planet should the aliens return. For now though, humanity is content fighting itself. And these super soldiers have only poured fuel on the fire.
White Noise follows several of these transgenics as they navigate the minefield that is their world.

$60   Reached!
. With this milestone reached, I will start updating every monday guaranteed, except for breaks after each chapter is completed.

$250
At this milestone, White Noise Precedes Them will move to twice weekly updates, one on Monday and one on Thursday.

$500
At this stage, I will be able to afford a flatter, which means more comic for you! The update schedule will move to three times per week, every Monday, Wednesday, and Friday.