$10
per month
Join
You are awesome and you're now officially a minion fuelling the WTF rocketshipposaurus!

So, what do miniheros get?

$10
per month
Join
So awesome! More fire for the rocketshipposaurus! What makes heros bigger than miniheros, besides a high-protein diet? 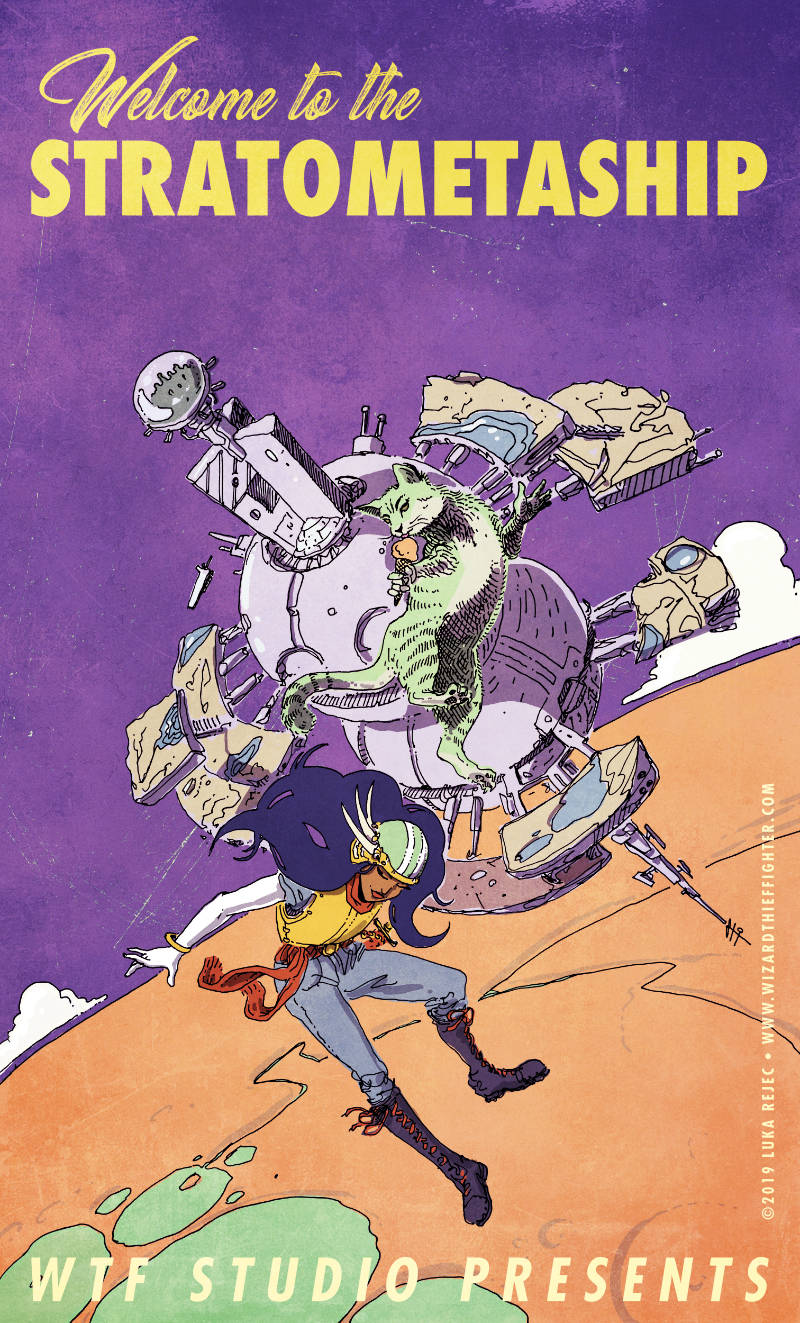 Join the WizardThiefFighter stratometaship to enjoy more-or-less-monthly* installments of psychedelic metal tabletop role-playing game adventures in wondrous worlds and terrible times. From cat and machine-infested weirdlands to rain-swathed intimately paranoid mountain towns, from cinder-aired ruined cities to the white bird's dazzling winter vistas, bring your heroes along to the lands of high imagination. Concepts, writing, art, and layout are all the work of Luka Rejec, a Slovenian game designer in Seoul.

Projects are slow-burning right now as Luka finishes print layout on the Ultraviolet Grasslands, which successfully kickstarted with the help of Exalted Funeral Press in April 2019.

Currently Luka is writing, illustrating, and publishing two game books for the patreon subscribers: Red Sky Dead City, a doom metal journey into the gory aftermath of a military conquest, and Longwinter, a game of survival in the face of a remorseless Winter deity. 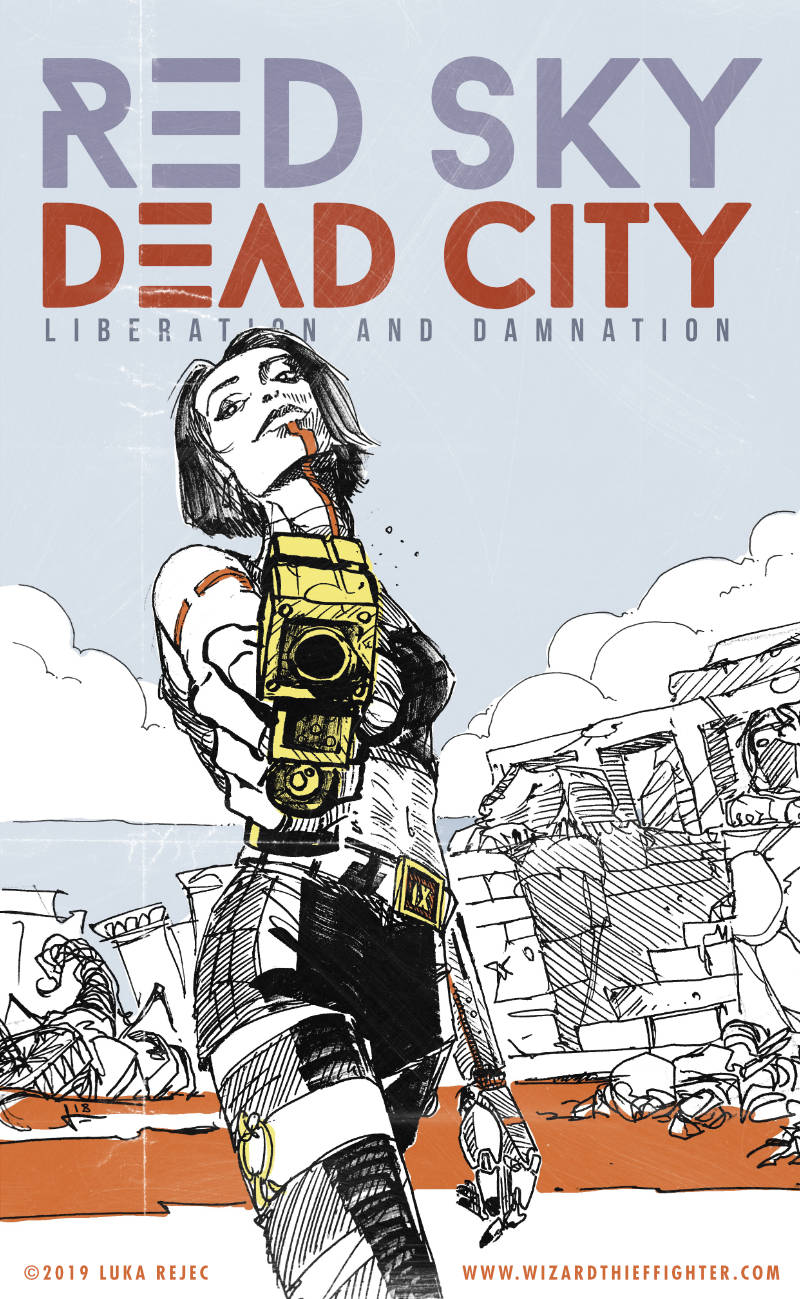 The greatest city of all, Ebét, far away across the seas, has fallen. The mystical rationalist army of Iks has brought down the corpse-fat empire of Ebét and now its timeless treasures are ripe for plunder. The offerings and sacrifices and jewels of millennia await.

A dark and doom laden city-and-necropolis setting filled with the victors and the vanquished, sentient golems and flesh-sculpting priests, rebellious dogheads and undying ancestors, all roiling in layers upon layers of ruin, treasure, destruction, and hope upon the carcass of a massive city. Filled with factions, encounters, treasures, equipment, lore, this book is covering some dark themes. 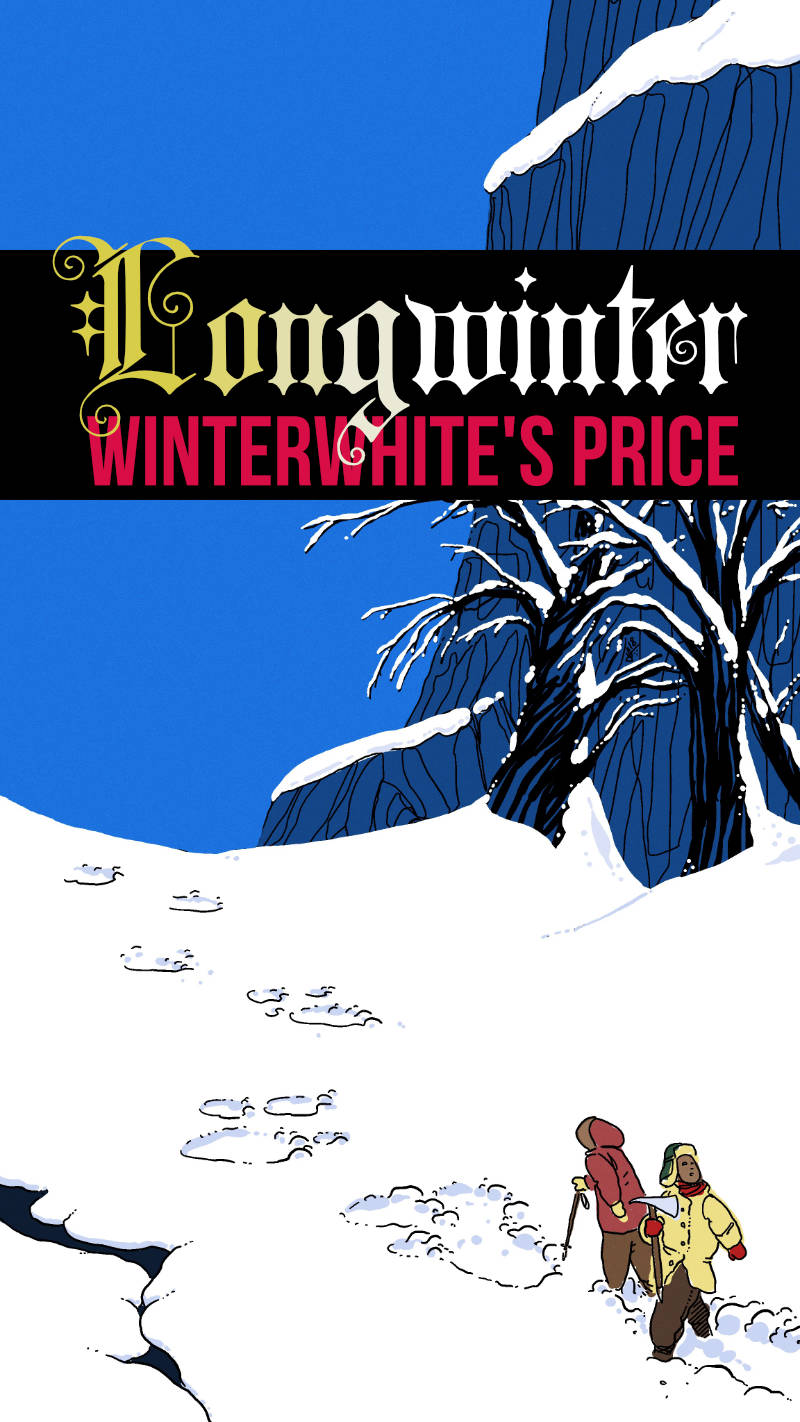 The snow is alive. A soft, cold spirit courses throughthem. Her lace threads the world; watching, drinking, listening, stroking, soothing, killing. Her touch is soft and icy. She is Winterwhite, the daughter of the Waterdrinker and the Northwind, and she is a terrible god. An avatar of ice and hunger, of visions and death.

Longwinter is the TRPG sandbox of a realm that has broken its vows to Winterwhite and will now pay the cold price. This is the current project Luka is working on. The next installment is a winter survival module, Escape from Ice Valley, the third and final will Confronting Winterwhite, which takes the heroes face to face with the deity.

The generous supporters of the WizardThiefFighter patreon, the "stratometaship," have made possible the following books. 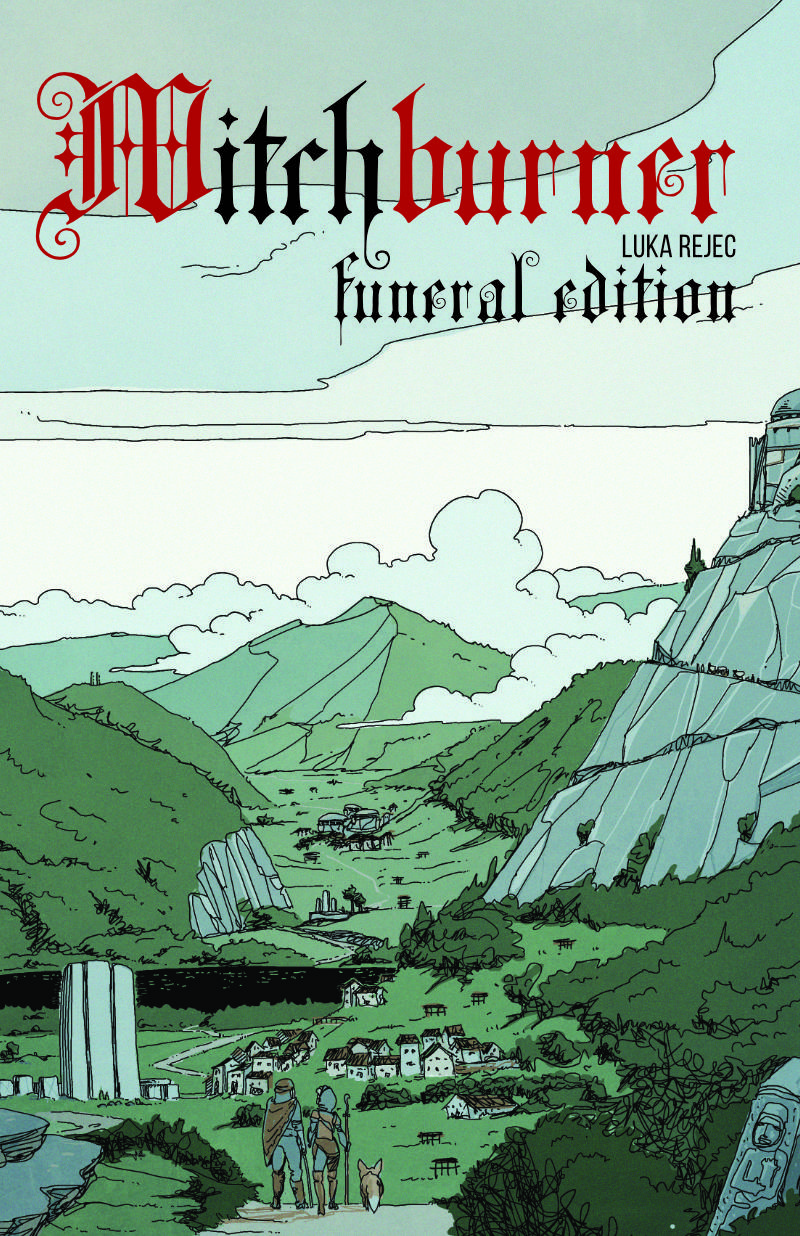 It dives into dark teatimes of the soul, fog and trees — and comes with a lot of musical inspiration. 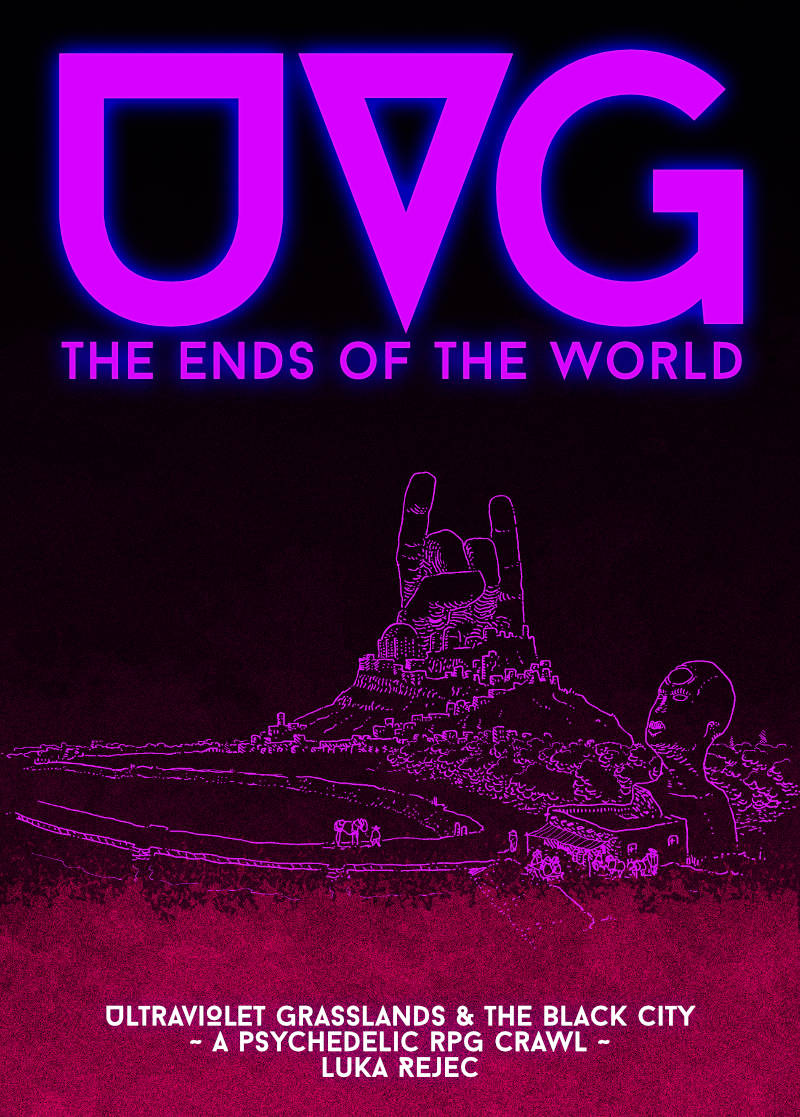 The Ultraviolet Grasslands (UVG) is a 192-page rules-light rpg pointcrawl adventure inspired by psychedelic heavy metal, the Dying Earth genre, and Oregon Trail games. It takes a group of heroes into the depths of a vast mythic steppe filled with the detritus of time and space and fuzzy riffs.

Thanks to the Heroes

I repeat my thanks to my subscribers on this patreon. You are the true heroes of the WizardThiefFighter story. I started with no clearer idea than a donation box for my fantasy and rpg art, and you responded. You stuck by me as I turned it into an illustrated choose-your-own-adventure. You stuck by me as I refined that concept into the psychedelic sandbox of the Ultraviolet Grasslands. You've continued to stick by me as I write more adventures, worlds, and stories.

More than that, you inspired me and continue to inspire me. When I get a messages like this:

"Luka has the rare gift of not only being able to concoct useful stuff, but stuff which lights up your synapses and immediately makes you imagine endless things beyond what he presents."

"Hey, just wanted to say again how pleased I am with everything Luka's been putting out. My group fucking loves the setting, and they've only just begun."

"...a fantastic job with UVG. I highly suggest backing Luka on Patreon, his work is simply fantastic. Linked, bookmarked, filled with artwork, a glossary, and just a shit-ton of amazingly odd ideas all masterly thrown together."

"I knew my players of my UVG campaign were going to be vicious scumfuck bastards, but not "tear out the throat of a dog with your teeth in an underground ring fight to secure a black market loan" levels of depraved. I can't wait to see what comes next."

"I am thankful to be here. More thankful than I ever imagined I would be."