$5
per month
Join
Every amount helps and we are so thankful.  You have our endless appreciation for your support! 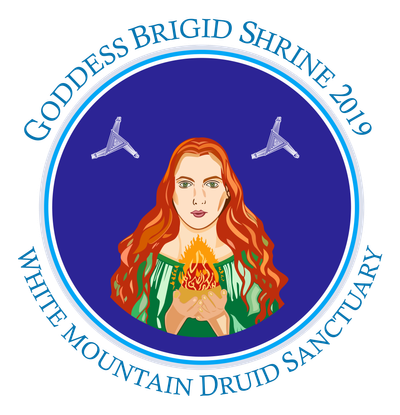 $10
per month
Join
You'll receive our official Goddess Brigid t-shirt with her unique logo from her Shrine.  The t-shirt itself will probably be forest green. 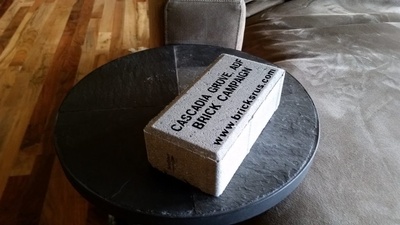 You'll get a 4x8 inch paver brick engraved with 3 lines of text placed along the walkway leading up to the Goddess Brigid's Shrine.  Text can be anything you like, i.e. name, organization, grove, dedication etc. It is limited to 3 lines of 18 characters each and is subject to our team's approval. Thank you for visiting White Mountain Druid Sanctuary’s (WMDS) Patreon page! WMDS is a druid site dedicated to honoring the sacred Ancestors, the Nature Spirits and the ancient Indo-European deities. It is inspired by Ár nDraíocht Féin: A Druid Fellowship (ADF) which “is a Pagan church based on ancient Indo-European traditions expressed through public worship, study, and fellowship.”

White Mountain Druid Sanctuary is raising money for the purposes of:
Over the last year, we built a Shrine to the Goddess Brigid. It is an outdoor shrine (like all the others) made to withstand harsh winters and heavy snows. The shrine has been constructed with concrete walls and a wooden roof - all forming a sheltered area that includes a granite shelf for lighting and placing incense and other offerings. The Goddess Brigid's Shrine as of fall 2019. It is placed over the irrigation ditch so there is a short wall to keep people from stumbling into the water.

Unique to the Goddess Brigid's Shrine will be a place for a fire inside the Shrine to honor her capacity as a Hearth goddess.  In addtion to a fireplace, we have already built an everlasting flame that stays lit all the time.  There will also be one of a kind artwork of her across from the flame facing due west. The Goddess Brigid's everlasting flame. It is fueled by a permanent gas line which you can see at the bottom.  It is also encased in glass from inside the Shrine and outside to keep it safe.

Her custom made artwork will hang on the eastern wall inside Her Shrine looking directly west toward the Stone Circle and the Cernunnos Shrine. Custom made artwork for the Goddess Brigid's Shrine.  "Eternal be the flame of Lady Brigid's inspiration".

White Mountain Druid Sanctuary is one of the few places in the country that has imagined and created an environment similar to what we believe our ancient ancestors worshiped in, and then placed it in a modern setting. Grounded in what we know from artifacts and written history, ADF has created rituals that honor the Indo-European pantheons of old. At White Mountain Druid Sanctuary, we are creating a place in which we can honor the Gods and Goddesses of old, the Nature Spirits, and our Ancestors.

One definite peace of mind you have as a contributor is that a significant amount of work has already been completed on other shrines. We already know exactly how to get the work done and we’ve already been successful at doing this before. If you would like to see more details on each feature at WMDS, we have a blog at http://witchesandpagans.com/pagan-paths-blogs/cas...

Below are examples of our other Shrines.  The first one for Lleu Llaw Gyffes was also built last summer and the details will be completed this summer, 2020. Lleu Llaw Gyffes as of fall 2019. He is the Welsh god of transformation.


Shrine to The Dagdha, Irish god of appetite and magic


Shrine to The Morrigan, Irish goddess of battle, death, and rebirth The Goddess Samona's Shrine in the summer 2019.  She is our local goddess of the land and the White Salmon River. Shrine to Cernunnos, Gaulish god of the forest, underworld, liminality and commerce.

To watch the consecration of this Shrine, see the video below.
https://youtu.be/p4Z0BcsuOYc

The Morrigan, the Dagdha, Cernunnos and Samona's Shrines are built with concrete blocks, stucco and metal roofs. Trout Lake, Washington can get from 3-6 feet of snow at once so the Shrines are built to be beautiful and sturdy.


Shrine to Lugh, Irish god of many talents

Lugh’s Shrine is built against the back of the Sanctuary building and is somewhat sheltered by it. The walls are wooden with a metal roof. The Sanctuary building is made of cob and has a tree sculpted into the east wall. We use it for indoor rituals on cold evenings. Inside of Sanctuary building with tree sculpture and fireplace

There is also a labyrinth The labyrinth was built for WMDS and the Mt Adams Zen Temple. Both Buddhists and Druids can be seen walking and meditating along its Cretan design.

All of these features surround the Stone Circle itself.  Stone circles predate Celtic druids but we pay homage to their makers by celebrating our rituals in the middle of one. It has 20 foot basalt pillars of varying size as well as benches, an altar, a three foot fire pit, a well and an axis mundi.


East end of Stone Circle, including Axis Mundi with fire pit in the foreground

WMDS resides on the grounds of the Trout Lake Abbey Complex in Washington state. It is wholly owned by Kirk Thomas and Kozen Sampson. The Abbey is home to:

And did we mention the unobstructed breathtaking view of Mt Adams? (below)

The mountain can be seen from most spots on the property and is a constant, calm companion to all of the complex’s guests.

Below is an example of the engraved paving brick you can get as a perk. These bricks will lead up to the Shrine. This is a 4x8 inch brick (below). We also have 8x8 inch bricks and replicas.

An example of the engraved brick If you have read this far, you may be wondering what is next.  We always have plans!  Here is the statue of the Earth Mother whose Shrine will be started in summer 2021. If you can’t contribute now, here’s how you can still help. Tell your friends! Come and visit! Trout Lake Abbey exists for people to visit, wander the Labyrinth and the Stone Circle, and make offerings at the shrines.

A bit of small print.

$171.29 of $500 per month
We will be completing the Goddess Brigid's Shrine this summer, 2020!  We also built the wooden structure around the statue to Lleu Llaw Gyffes last summer and will be finishing the details on that this summer.  For an overview, scroll through our Patreon page.  At the bottom of that page is an image of our next project. :)  Thanks to everyone who has donated so far - we couldn't do this without you!
1 of 1