Alexis Scarbrough is creating content you must be 18+ to view. Are you 18 years of age or older?

is creating an illustrated book about growing up mentally ill in America. 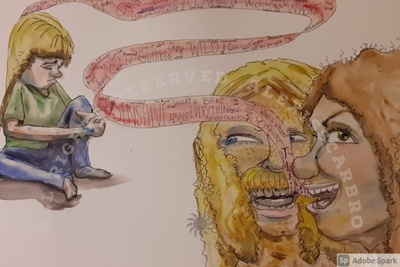 $5
per month
Join
This is the beginning of my watercolour painting on Programming Our Children.
There's a lot of detail in the finished work, lots of grit and emotion packed inside.

With your $5.00 support I will reveal my finished painting, brushstrokes and all to ONLY you, my fellow mental health /art freak.

If you're interested in purchasing the print after viewing hmu! 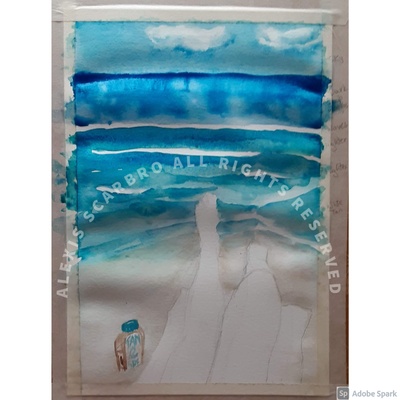 $10
per month
Join
When I was 15 my mother was exhausted, trying to control my every move.  Like her mother before her, she sought to send me away so she could reset, and hopefully so could I.
Family stepped up; on someone's dime I was sent to Florida and spent the week on white sandy beaches with my great grandmother on the Gulf of Mexico.  I had forgotten a camera, so took a mind snap.  It was the most blissful, enlightening, entertaining week of my life to that point. This vision is one I visit often since leaving; a memory that takes me to timeless wonder, beauty and safety.

This is my mind's snapshot of serenity, 33 years after.

When this painting is finished, you get to be the first to see it!  (psst! It's done!  Come on, what are you waiting for?) 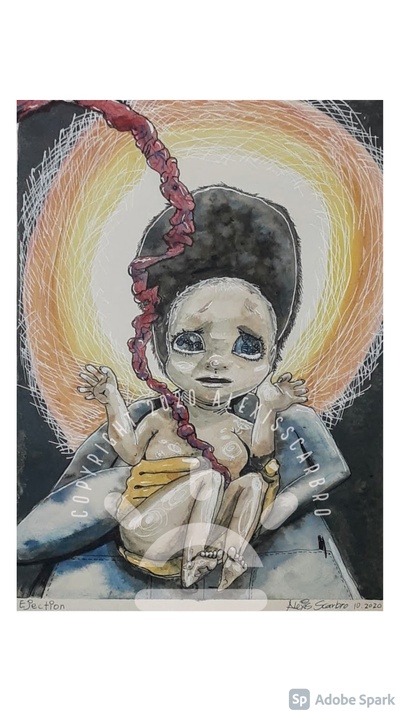 $50
per month
Join
With this tier you will receive a download of the watercolour painting Ejection, by Alexis Scarbro, sans watermark.
This painting represents the removal of life from the womb, a death of sorts, with a new life as a separate being from the Mother (or as it should be).
if you're interested in purchasing this painting in print form, hmu!

Question:
In your whole life have you ever worried that you were mentally retarded or disabled and no one wanted to tell you? Like, maybe, you were dropped on your head and no one has had the guts to burst your bubble?
Did you get reprimanded and smacked a lot for "mouthing off"  because you wanted to understand things --or pointed out logic and hypocrisy to your elders?  Ever been told, "Do as I say, not as I do"?
And because of this inability to shut your mouth and stop being inquisitive, were you rejected, ignored, shunned, ex-communicated from or cast out of church, family, clique, community, club or group?
Maybe you're like me and were you raised by immature parents; parents who aren't matured mentally past their teens.  Trauma halts growth, and during my mother's childhood trauma was frequent, so frequent that when she reached 17 her own mother drove her to the train station to run away from home.
It was that bad.
During my youth, my mother often reacted like a young girl towards me; jealousy, rage, fear and worry were her primary running programs.  Lessons were difficult for me to learn on my own, because of the emotional cascades from my mother. From the outside, her body and facial features appeared mature, but her capacity to see me as a learning child and not a part of herself to be judged just never happened.  Not into my teens, when I surpassed what she could teach me, nor into my 20s, 30s, or 40s.  To her, I was still a child, unable to do things without her approval, first.  I often envisioned a giant hen (my mom) sitting on a nest, and I was one of her eggs --not even a chick, yet.
She has so much unhealed trauma inside her that her own child with the face of understanding and obedience couldn't bring empathy to her mother heart.
My mother shot first and asked questions later.  She relented her actions hours after, but held fast to her obscene punishments and odd mind games.  She was terrified of people who she deemed "crazy," and when she dragged her family into church to save herself from her sinful self, that list of terrifying people grew to include all the wicked people of "the world," including close family.
My stepfather was no more a child than I when he married my mother; I was 9, he was in his late 20s.  His sense of humour revolved around the anus and his ability to produce putrid things with his body, and he made sure everyone heard, smelt, and even tasted it; especially me.
My mom married the school bully.  She didn't go to school with him, so she didn't know. But, every torment that can be pulled off on the playground, the most cruel things you can threaten to do and imagine was tried out on me at home, by my very own stepfather.
I tried to accept him and see what my mother saw in him, but I just couldn't imagine that hard.   It was like they were living somewhere I wasn't!  I felt crazy because I couldn't see the world they saw.  I kept feeling like I was in another dimension where there weren't wicked people dancing about doing wicked things, nor a war between good and evil, nor dangers around every corner.  I just couldn't see what they said was going on all around me.
I couldn't see their savior, god or spirit, either --but I learned that if I showed I believed their fantasies, I was accepted with smiles of approval and hugs; things that didn't come freely, otherwise.
My step dad and mom didn't like me asking questions.  It made them feel challenged and inferior. It enraged them, how dare a child question the authority of her elders? This got particularly difficult for me when my parents dove headfirst into Fundamental Christianity; I wanted to understand, but feared asking because I'd be punished if  I was impertinent.
Maybe you felt as I did; confused by the fantasy world my parents lived in; their denial to obvious issues, and their insistence that everyone else is 'evil' and "crazy."  Maybe you felt your family was special, like I did; my parents said they found the key to life in the Bible and were excited for Jesus bringing them to heaven, but life on earth only became one giant hell. Why wasn't anyone else seeing this?
Do you see yourself as a victim in bad circumstances, unable to change it?
Do you pity your parent(s) for their victimhood in some terrible circumstance?
Maybe you even had to parent your parent(s) by consoling , caring for, and comforting them through relationship troubles and adult situations?
Many of us have swallowed the Kool-Aid and followed our parents’ paths, just like they followed theirs.
...like I followed mine.

I am writing and illustrating a book exposing my enmeshment trauma, neglect, and narcissistic abuse. These are the experiences I lived through, through my eyes; a child born to adults suffering from mental illnesses caused by trauma in their childhood.  It is a visual account of the suffering caused by abuse and neglect, and exposes the repeated cycles sent from generations down to me, then my children --almost! I've halted it halfway through my parenting years.  I've made amends with my older children, we're healing through this trauma.
I will share how these cycles, or generational curses if you will, have been broken through therapy, self love, self care, vulnerability, and something wonderful called the Polyvagal Theory.
From my children forward, this illness will cease!
I ask for your support.
My hope is that this book will open eyes and help many recognize what's actually not normal.   It is my hope that sharing my tough life will help others like me to see how they've been abused, neglected and traumatized, in order to assist in healing hurting minds.
This book is a validation, even, of the things that happened to me through my eyes, because even though we're no-contact, my mother to this day tries to tell me what to know, what to remember, and what to feel.

Children are blank slates.  They know nothing to compare life to, so see toxic behaviors as normal, and so pattern their behaviors to fit and mimic their role models.  As a healing adult, I can witness myself at times, triggered and low on energy/food/sleep.  I revert to 9 year old me and lash out, exposing all of my feelings, burdening others with my unpacking, and saying things I should never say.  I grew up in Survival mode, my parents were in Survival.  They couldn't teach me any other way; they knew no other way.
I'm no longer in Survival mode, primarily. My goal is Safety so I can flourish and grow.
By learning to love myself, instead of accepting the rejection I'd convinced was mine, I am now mentally healthy. I know this can be the same for many who experienced life like I did.
Please pack on the support, friends.  I believe this book will spark an evolution.