CaramelCowboy is creating content you must be 18+ to view. Are you 18 years of age or older?

Hey there!
Thank you for visiting my little Patreon page I setup for my game. Without boring you too much, I'd just like to give you a brief background about myself and why I'm making this game (and more to come. fingers crossed). I've always been someone who's into story telling and coding. I've been a Visual Novel player for a long time now and I decided to take the leap from "Can I do this?" to "I'm gonna do this". Being a solo developer I put in a lot of my time into this project (~5 days a week) because I really enjoy the entire process and it has never felt like a chore to me.


The Sword Bearer is my first project and I plan on finishing this one 100% before I even consider the next one. I'm a massive fan of Medieval Fantasy themed games and movies and so I decided to write something that I'm passionate about rather than what gets the most number of clicks. The choices you make WILL change your path to the end and even the way your story ends. There will be some side quests that won't really impact your ending *as much* but will have little interesting stories that involve non main characters much like side quests in a Rpg. You can ignore these side quests and that won't make your ending better/worse because they're designed to add flavor to your gameplay. So if you're someone who likes a little break from the main story, this is for you. 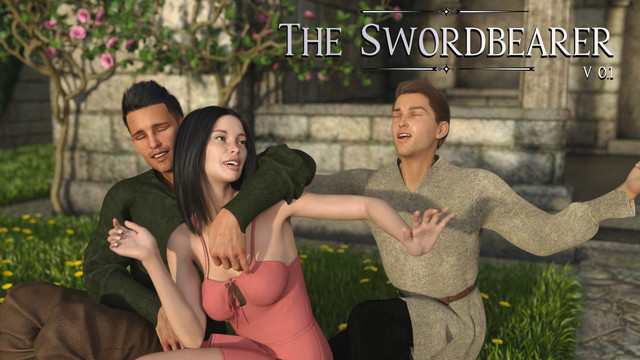 You grew up in a peaceful little town called Riverfell with your best friend Aren and his family. You and Aren have recently applied to the Knights Guild at the capital - A prestigious group that even accepts novices who have what it takes. Your life changes when you wield the sword your mother left you. Meet loveable characters and beautiful romanceable women as you explore this world that awaits you. Face the darkness that surfaces and uncover the evil plot as your story progresses. Go on optional quests with your comrades where you may have to make decisions that test your morality and add another layer of content for you to enjoy.