is creating Visualizations for Hockey Stats

$2
per month
Join
You will feel serene in the knowledge that you are keeping hockeyviz.com open and free of ads in perpetuity. Your houseplants will flourish.

I make visualizations that help people understand hockey at hockeyviz.com. My graphs, charts, and articles show what happened, suggest what will happen, show us how we should think about hockey.

The basic substance of all stats work is answering: what happened?

I spend a lot of time finding new ways to display the facts of what happened in a given game or while a particular player was on the ice, in a context that makes it easy to understand. Our visual intuition is much stronger than our ability to grasp numbers, so I focus on making pictures.

For instance, here's a graph showing where the San Jose sharks took shots from when Brent Burns, their minute-leading defender in 2018-2019, was on the ice:

You can quickly see the kind of impact he has: the big red patch of shots that he takes personally from his usual spot at the right point; the way the team gets great shots from right in front, the way the team avoids the faceoff circles, compared to an average team. I make many kinds of descriptive graphics that help people understand what happened -- who did what, who was amazing, who hurt their team, who was a non-factor.

I make a raft of different descriptive visualizations, simple and complex, covering single games, seasons, teams, and whole years, published every day of the hockey season on my website, hockeyviz.com.

At the same time, we want statistics to help us separate the lucky from the good, to understand whose fortunes are about to turn for the better. Prediction requires us to isolate which features of hockey arise from the skill of the players, which of these skills can be repeated in the future, and which of these matter for winning. I make predictive models which I use to simulate seasons and estimate the probabilities of making the playoffs, of meeting particular teams, or of getting a high draft pick. For instance, here is a graph showing Minnesota's likely first-round opponent from 2014-2015: 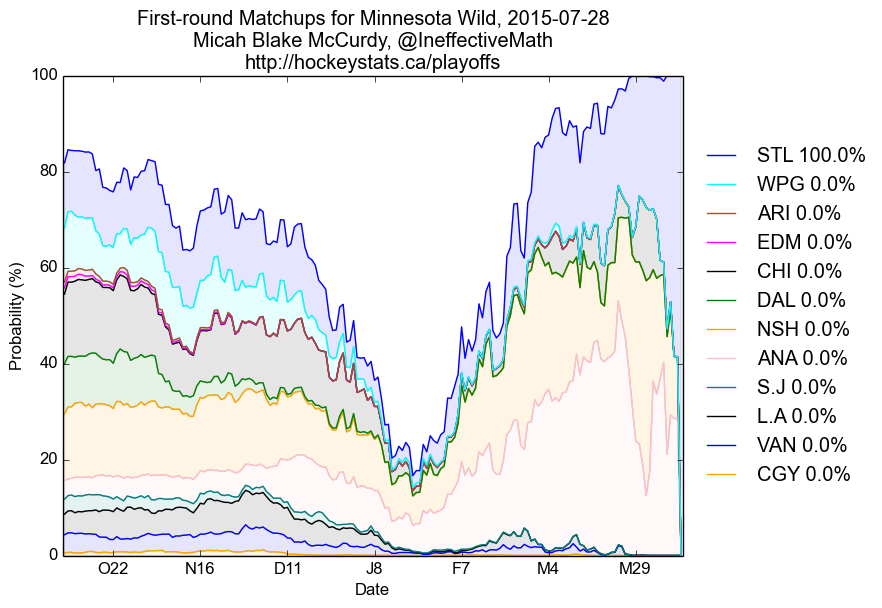 They salvaged their season with a goalie trade and then manoeuvred their way into a match-up with St Louis after seeming sure to meet Anaheim or Nashville. There are various outlets which produce predictions, but their methods are either shrouded in secrecy or known to be weak. I've written extensively about my methods and I publish all the details of models for anybody to read or use for themselves. I make many predictive visualizations---for the Presidents' Trophy, for the lottery picks, for specific playoff match-ups, point projections for individual teams, and much else.

How should we think about hockey?

In addition to making descriptive and predictive visualizations regularly, I also write accessible, scholarly articles delving into every aspect of hockey for which data is available. Some of these articles are theoretical and technically sophisticated; others are simple and short. I illustrate all of these with custom visualizations and publish them free of charge for all who are interested in understanding hockey better.