POSTCARD IN THE MAIL! 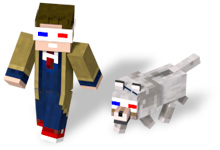 My name is Kurt, and since 2011 I've been making a variety of Let's Play gaming videos on YouTube. The longest running series on my channel is Far Lands or Bust, where I've been traveling on an expedition to the fabled Far Lands of Minecraft for over five years. During the journey I am fundraising for charity, to which generous fans have donated over $445,731 since the beginning.

The Far Lands or Bust phenomena has been featured in articles and interviews in The New Yorker online and BBC4 Radio. Most recently it was featured in the Guinness World Records Gaming Edition as the "Longest Journey in Minecraft." In addition to this series, I also make videos and Twitch livestreams featuring a variety of other video games and content. Since launching this Patreon campaign in 2014, my work has been primarily supported by Patrons who have fostered a vibrant community on Discord and through our Farlander Patron Minecraft Server. We would love to have your support!

190 of 200 patrons
By reaching this goal you'll be funding a separate audio-only downloadable podcast edition of each future episode of FLoB! Currently availiable directly at shows.acast.com/flob or on iTunes.
1 of 2