$25
per month
Join
You get everything above plus:

$50
per month
Join
You get everything above plus:

Oneshi Press is run by a writer-and-illustrator team, Lynsey G and Jayel Draco. Together with a growing community of amazing creators, we publish high-quality comics, graphic novels, and illustrated books that contribute to the collective conversation and help us all unify and transform one another into more nuanced thinkers and compassionate members of the world we share. Our passion is creating stories that explore dark corners, shatter taboos, emphasize progressive ideals, and immerse you in intricate worlds. At Oneshi Press, we believe in the power of collaboration over competition. When creators work together, they create projects far greater and more glorious than the sums of their parts!

We use Patreon as a subscription service for folks who want to get more of Oneshi Press’s creations—and see how they're made. As a subscriber, you’ll automatically receive our publications in digital and/or print as soon as they’re released. Plus awesome perks, like Patreon-exclusive merch, work-in-progress updates on upcoming publications, and the warm, fuzzy feeling of helping a small, creative business!

Our projects include an epic series of comics anthologies; the sci-fi-fantasy series Children of Gaia; the zom-com caper Mr. Guy: Zombie Hunter; the vigilante-dogs-noir comic series PACK; the secks-positive sci-fi graphic novel Tracy Queen; and the Zombie Adoption Program. We’re inviting you to explore them all! 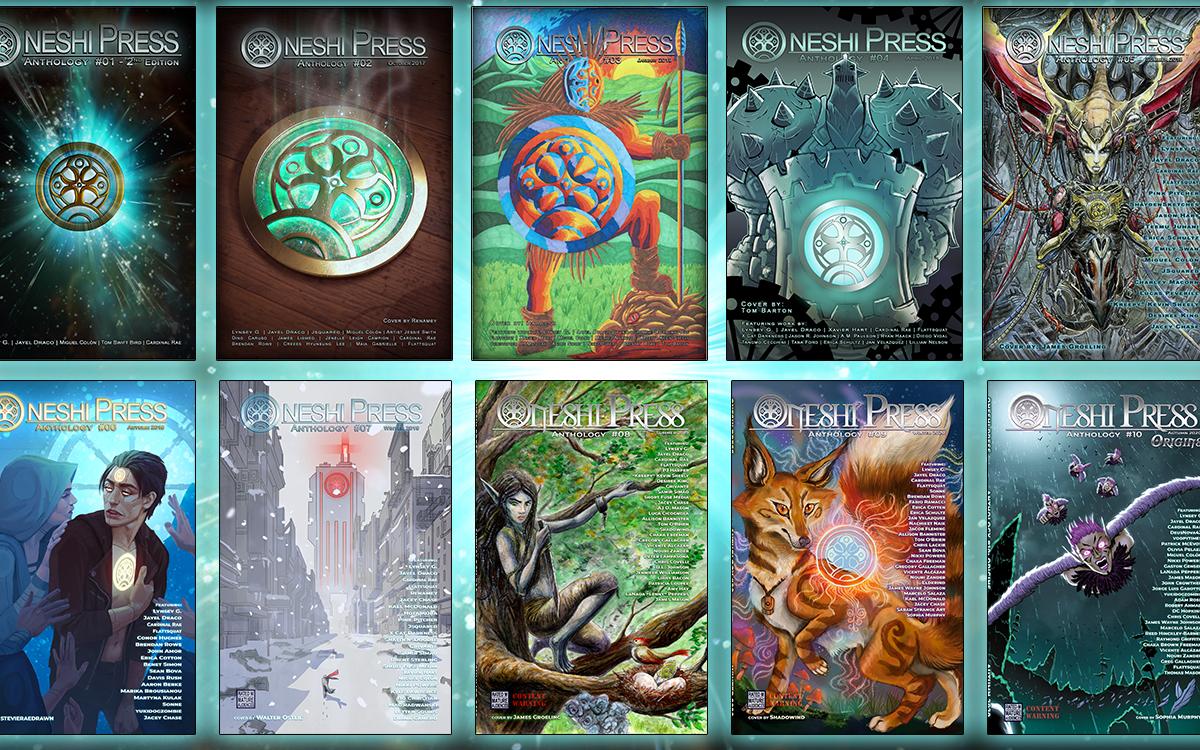 Oneshi Press is building a world where indie comics creators get their work published in gorgeous, high-quality, full-color, trade-paperback collections. Where comics fans immerse themselves in gorgeous art and explore new worlds. Where one anthology combines short installments of graphic novels with one-off short comics, guest art, and artist spotlights, all inside beautiful 120-page books that are available online and in print. You’re invited to read our anthologies and submit your own work for inclusion!

An epic, secks-positive, sci-fi graphic novel sprawling across in eight serial issues, Tracy Queen is written by Lynsey G, drawn and colored by Jayel Draco, inked by Foulsham, lettered by Cardinal Rae, and flatted by Flattsquat.

The granddaughter of a powerful organized crime boss, Tracy Queen was raised as her grandfather’s secret weapon—a deadly enforcer with a brilliant scientific mind and a sex appeal very few could say no to. Then Tracy befriended Nikola, a coke-addicted supergenius who happens to be a runaway lab raccoon. He helped her escape her grandfather’s crime syndicate and build a new life as a phenomenally popular adult webcam star. But Tracy’s sudden rise puts her in direct conflict with the adult entertainment establishment, even as her criminal past resurfaces to drag her back in. As Tracy and Nikola race against time to build a cyborg-clone army to defend feminist sex-positive smut against the soulless machine of the Smut Industrial Complex, Tracy must draw on all her skills in the lab, on the battlefield, and in the bedroom to preserve the life she’s built. Learn more at TracyQueen.com.

A gritty vigilante comic book series told in seven issues, PACK is written by Lynsey G, drawn and colored by Jayel Draco, inked by Foulsham, lettered by Cardinal Rae, and flatted by Flattsquat.

In Brooklyn, corruption runs deep, and the only way to stay safe is to assume everyone is on the take. On these lawless streets, a pack of six stray dogs—and one stray man—protect the innocent. Patience and his Dogs of Virtue prowl the darkest alleys of the Brooklyn night, enforcing their own brutal justice as they put crime and corruption under the fang. In these dark times, the line between hero and villain is blurred, but to the PACK it’s simple: theirs is the only acceptable violence, and their retribution is as swift as it is fierce. Still, their vigilantism draws attention from all the wrong places, and one rookie cop must try to choose a side before it’s too late. Learn more at PackComic.com.

Mr. Guy: Zombie Hunter is an epic, hilarious, post-zombie-apocalypse graphic novel written by Jayel Draco and illustrated by eight different artists, each of whom tackle one eight-page story arc.
Haunted by a sassy spectre named Spooky who lives in his infected flesh, Mr. Guy’s new life is less than ideal. He’ll go to heck and back to free himself from this cursed sidekick, but first, he’ll have to figure out what caused the zombie apocalypse. Could it have been a retrovirus? Perhaps a voodoo spell? Maybe divine retribution? How about GMOs? Are we saying it’s aliens? Join our reluctant hero as he begrudgingly deconstructs every horror trope he knows in bid to save himself—and the rest of the world. Learn more at MrGuyComic.com.

A fantasy epic told in books, comics, art, and more to come, Children of Gaia is being co-created by a growing team of writers, illustrators, poets, consultants, editors, and more…
Rendaraia is a realm where nature, magic, and civilization have long lived in harmony. Into this peaceful coexistence come brutal and mysterious invaders from a land called Terra, an imperial society driven by its own rapacious needs and the demands of its politically divided home. As war rages, hundreds of cultures of wildly varying technologies, traditions, and species fight to preserve their way of life. But Rendaraia and Terra are linked more deeply than anyone had ever imagined.
Children of Gaia is a vast universe, and the setting for an epic and ongoing story being told across multiple media. Here are some of the COG projects we’ve released and are currently creating…

COG: The Great Nations of Rendaraia

An illustrated fantasy book that’s both an artifact in the larger Children of Gaia series and an introduction to this vast universe, The Great Nations of Rendaraia was written and illustrated by Jayel Draco
The five Great Nations of Rendaraia have stood for centuries as strongholds of culture, magic, science, and military strength. When, one by one, the Nations mysteriously fall—each destroyed in a day, with no time for word or warning—the intrepid scholar Jan’Ka’Zian sets out to record a complex network of intertwined cultures on the edge of oblivion. Jayel Draco’s gorgeous illustrations present a vivid picture of elaborate cityscapes and mountain vistas, vast skyship fleets, and fantastic flora and fauna.
The Great Nations of Rendaraia is available in paperback and limited-edition hardcover at our online store.

An illustrated novel with a weird western vibe, War & Horses is written by Peter Lampasona and illustrated by Jayel Draco and Chris Covelli.
Deep in the dustbowl of the newly formed People’s Republic of Draven, an overthrown aristocracy coexists with the country’s new government in an uneasy peace that’s often broken by conflict. In the midst of the upheaval, famine and drought wrack the once-fertile breadbasket—and violence is a spark to dry grass. In the midst of the chaos walks a shadowy figure: the Triggerman. The only sure thing about him is that he leaves a trail of chaos in his wake. Following that trail is journalist Landon Ford, documenting the Triggerman’s exploits and digging for the truth of his identity. War and Horses is Ford’s work: a series of dime-store novels, popular in Rendaraia and Terra alike. But the Triggerman is very real—and his true purpose may become the story of Ford’s life.
War & Horses is available as a paperback and ebook at our online store.

$145.65 of $500 per month
When Oneshi Press is earning $500 per month, we will be able to attend an average of one out-of-town comic convention per quarter! That will help us grow our fan base and retailer footprint. Gosh, we can't wait!
1 of 2