The Patron Saint of Suicides is creating content you must be 18+ to view. Are you 18 years of age or older?

The Patron Saint of Suicides

The Patron Saint of Suicides

is creating a crime podcast 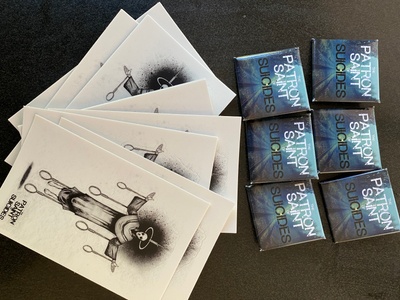 $25
per month
Join
SILVER. For $25, you get everything at the lower tiers PLUS:

About The Patron Saint of Suicides

Created by author Alex Dolan in partnership with Audiohm Media, The Patron Saint of Suicides is a 14-episode podcast audio drama with a full cast of 42 actors, an original score, and sophisticated sound design and foley effects. Supporters also have access to an additional 15 bonus episodes and additional behind-the-scenes content.

Haven Otomo has a gift of persuasion. After surviving a brutal train massacre, she uses this gift to save people from the brink of suicide. She spends her free nights patrolling the Golden Gate Bridge, where over the past few years she has stopped 34 people from jumping.

To process her own trauma, Haven goes to a recovery group for survivors and performs as a stand-up comic as a form of therapy.

Two years after the train massacre, the area sees a rash of suicides. Young men are throwing themselves in front of trains. When the police find a connection to the train shooting two years ago, it leads them to Haven.

The police ask for her help in the investigation. As more is revealed about these crimes, Haven wonders whether some of her fellow survivors are involved, and she questions whether she can trust the people closest to her.

A few years ago, I read a story about a man named Chen Si, who has saved more than 300 people from jumping from the Nanjing Yangtze River Bridge in China. I was immediately inspired by someone who would dedicate themselves to helping people in this way. The story also made me wonder what type of person would perform this kind of work, and the power of persuasion he would have to talk hundreds of people out of hurting themselves.

This was the seed that grew into The Patron Saint of Suicides. The main character, Haven Otomo, has dedicated herself to helping people in crisis. I wanted to create a character with a preternatural gift of persuasion and explore how this gift would impact other facets of her life. Then, I wanted to put her in a story where her gifts would be tested. I set the story in San Francisco, near the Golden Gate Bridge, the most popular location in the United States for suicide jumpers.

The central crime of the book, a train robbery that turns into a mass shooting, was inspired by the phenomenon of the “flash rob,” a new kind of crime that has emerged and grown in popularity over the past few years. The crime usually involves a group of minors meeting at a certain location, for example, a convenience store. They then swarm the store and steal everything in plain sight, fleeing the scene before the staff or owners can take action. A similar robbery recently occurred on the San Francisco Bay Area’s BART system. After interviewing several police officers on the nature of the crime, I thought it would be interesting to feature a crime that escalated out of control and resulted in tragedy.

The New York Times reported a study from the National Institute for Health Statistics that suicide in the United States has surged to a 30-year high. The latest data show that more than 42,000 people died from suicide in 2014, compared to more than 29,000 in 1999. The rates have climbed for almost every demographic and age group. The World Health Organization estimates that roughly 800,000 people across the globe die from suicide each year.

Suicide is a growing concern, and yet, as a society, we have largely shied away from discussing it in a meaningful way. This audio drama should resonate with those looking for a springboard for discussion.

We appreciate whatever support you can give, and we'll offer the following at these tiers:

BRONZE. For $5, you get everything above PLUS:

SILVER. For $25, you get everything above PLUS:

GOLD. For $50, you get everything above PLUS:

PLATINUM. For $100, you get everything above PLUS:

Other Ways To Support Us

Whether or not you can donate money, you can still support the show!

SHARE! Share this campaign, Share this URL so others can easily listen (https://podfollow.com/suicidesaints/view), recommend the show to your friends. Get the word out—we can't do this without you!

LISTEN! Tune in! A lot of people put a lot of work into this, and we think you're going to like it.

Praise for The Patron Saint of Suicides

The original story for The Patron Saint of Suicides was written as a novel, and adapted into an audio drama. Here are some blurbs from other authors about the novel version:

"Some books grab you by the throat and refuse to let go until the last page is turned. THE PATRON SAINT OF SUICIDES is such a book. Gorgeously written and ingeniously plotted, it held me captive from its shocking start to its jaw-dropping conclusion."

“An emotional ride born from the ashes of a tragic robbery, Alex Dolan delivers a brilliant and complex thriller that will whisper to you long after you close the cover. You NEED this on your radar.”

"A novel that subverts, very cleverly, the reader's expectations of where it will take them. I will be thinking about it for some time to come. Dolan is an unquestionably talented writer."

— Alex Marwood, bestselling author of The Darkest Secret, The Wicked Girls, and The Killer Next Door

“Alex Dolan possesses not only a fine talent for storytelling, but also a gift for creating intriguing, unusual characters to people and drive those stories. In The Patron Saint of Suicides, we meet Haven Otomo, a struggling stand-up comic who trolls the Golden Gate Bridge for possible suicides to coax off the rail. The prose is crystal clear and sinewy, scaffolded by a lively structure that dances from Haven’s first-person voice to an objective third-person narration featuring Gibson and Blossem. Dolan combines compelling, believable characters—Haven, in particular, is irresistible—with another dark, twisting tale that will keep you reading long into the night.”

“The Patron Saint of Survivors is a beautifully-written and immersive story that tackles fairly harrowing topics in such a captivating and lyrical way, I found myself lost in the pages, unable to put it down. Haven, our main character, is probably one of the most likable and unique characters I've read in a long time, a pitch-perfect embodiment of the extremes explored in this novel, comedy and death, extremes balanced by a talented author to make for a wholly balanced and literary novel, with the added bonus of suspense. I greatly appreciate Dolan's giving pen, the details he provides, the colors, the play with senses, so that I was able to live in this gorgeous story.”

—Shannon Kirk, award-winning author of Method 15/33 and In the Vines

“Alex Dolan’s THE PATRON SAINT OF SUICIDES is part mystery, part thriller, and wholly a dark and intricate study of human behavior. Dolan intersects comedy and tragedy with a masterful touch, resulting in a character-deep novel that contains as many moments of aching humanity as it does cliffhangers. One of the most original voices I’ve read in some time.”

“Employing deft prose, Alex Dolan weaves a compelling tale that tackles PTSD, gun violence, and other societal ills while exploring how we use humor to process and deflect our pain. A wonderful read.”

“The Patron Saint of Suicides is a complex exploration of loss and vengeance with a twist you’ll never see coming.”

“It's not enough to say that THE PATRON SAINT OF SUICIDES is a gripping psychological drama. It does more than grip. It tears. It horrifies. It eviscerates. Dolan has crafted a story that has as many layers as a fractured psyche--and as the plot unfolds, the layers peel back one after the other, always revealing new surprises. The deeper you fall into the plot, the deeper you fall into madness--until the book's gut-wrenching and completely unexpected conclusion. This novel is an amazing accomplishment.”

—Joshua Gaylord (Alden Bell), acclaimed author of When We Were Animals

“The Patron Saint of Suicides grabbed me immediately. Dolan writes with an incredible confidence and clarity of voice, and he roots a weighty, thoughtful story in characters who feel like people you already know.”

Recent posts by The Patron Saint of Suicides