$5
per month
Join
You get access to my Patreon-only blog where I may post high quality renders of the artwork I usually post on pixiv or tumblr without my watermark. May also get access to artwork/versions of existing stuff that I will only post on Patreon, Asys related things, etc.

$10
per month
Join
NOTE: This does not add any special benefits at this time, this one is currently just if you really like my stuff and want to contribute more.

I draw anime/manga style illustrations and artwork based on original and fan content, including videogames, anime, manga, etc.; I also stream videogames and/or artstream on occasion or I visit other people's streams, but I don't really monetize my streams or anything.

I also do commissions, which you can find more information here. Or you can look at the image below. 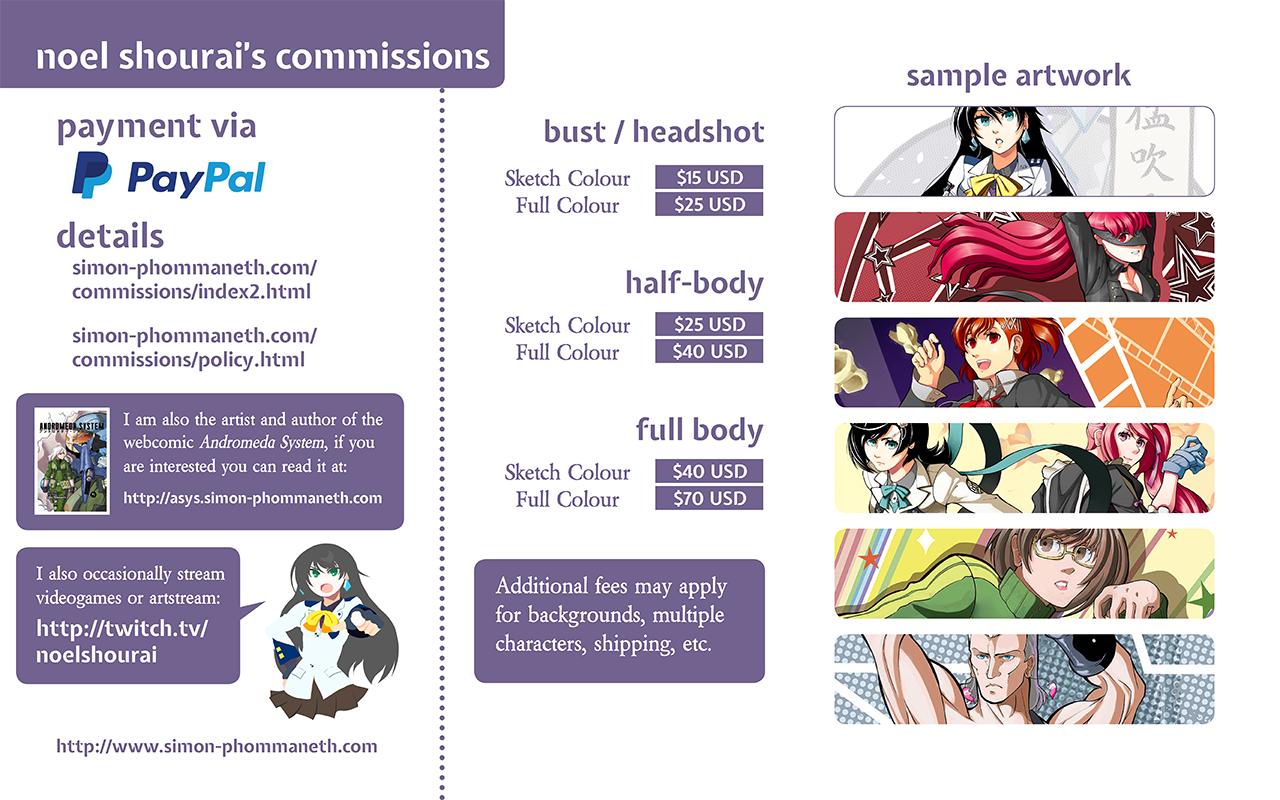 How much to pledge?

If you pledge $5 or more, you will get access to a Patron-only blog where I will be posting non-watermarked, higher resolution versions of my artwork. If you would rather just get a commissioned artwork, see the above image and link.

Even if you don't pledge anything, I will still do illustrations/work on comics because I enjoy it--however, it would make my life a whole lot easier, meaning I can be productive and even do things for you as well.

I also (sometimes) work on an online graphic novel called Andromeda System, which you can find here.

Andromeda System is a military aviation-based comic set in a near future setting and centered around a mercenary fighter pilot named White Raven and her private army as they pursue a mysterious terrorist organization that is in possession of state-of-the-art military hardware, including a stolen sixth generation fighter jet. Heavy anti-war and political themes may be involved. It is a chapter-by-chapter story and follows a serious/dark tone.

In simple terms, it's an original comic that is in the same vein as a certain real life military planes vs. cheesy anime superweapons videogame franchise that I am very fond of. As well as a certain stealth game series about a mercenary who basically does the same thing as the above, except instead of leading an army and waging an air war with antiquated fighter jets he runs around in a cardboard box and hopes everyone around him is none the wiser.

If you noticed this Patreon used to be focused squarely on Andromeda System, it turned out to be a whole lot more work than I realized; especially since I am writing, penciling, inking, screentoning, lettering and even editing my work all on my own.

Because of that, I expanded this page to focus on my general artwork and illustrations as well as my comic. If you prefer to support my comic specifically, then by all means.

NOTE: As of this writing, I currently have no further plans to publish Andromeda System as a webcomic, starting with a revised version of the pilot chapter onwards it will be a print comic instead.

Be sure to visit the following sites if you're interested in supporting me.