per month
Become a patron

I am Viznut, a low-bit demoscene artist and writer from Finland. A summary of what I've created so far can be found on my website.

I am also a freelance software developer, but the projects I participate in for money often feel unimportant compared to the creations I have not been able to monetize so far. I am now testing whether Patreon could fix this problem. 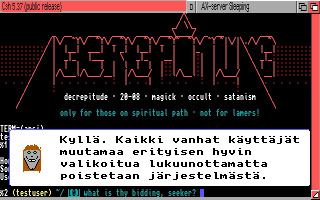 My most time-consuming creative project from November 2015 to March 2019 was PC-lamerit, a pixel-animated very-low-budget "tv series" very loosely based on my own history in the creative computer culture of the nineties (demoscene, BBSes, etc). The animation may be simplistic, but the technology and culture are represented accurately (although with some humorous exaggeration and fantastical elements). The 144 episodes are now all complete. An executable release (with selectable language etc. options) will probably be releaed in 2019. 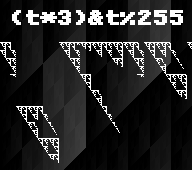 The projects featured in primary blog Countercomplex include hardcore low-bit technological experimentation, 8-bit demoscene art, philosophy etc. Bytebeat is one of my major technological discoveries so far. However, I have been regrettably inactive in this area in the last few years (and even at my most active, I brought my ideas to the public far less often than I would have liked to). By supporting me you would also motivate me to concentrate on this type of activity.

I also have great ideas about games, society/humanity hacks, serious fiction, "truth videos" and the like, but I am not going into more detail in public until I have concrete plans to show.